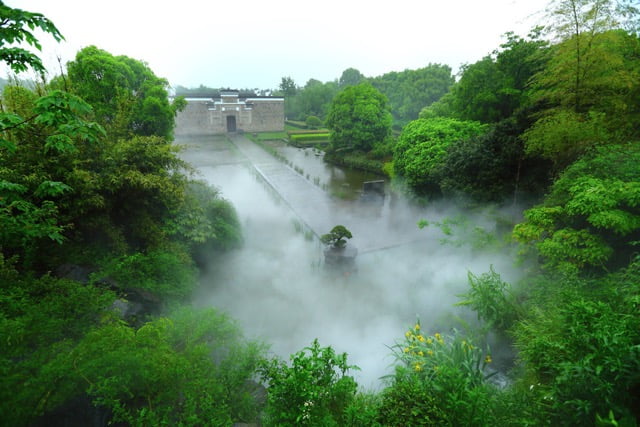 Set to launch in 2017, Aman’s fourth property in China, its most ambitious to date, will comprise a village of historic dwellings surrounded by a sacred camphor forest. Its peaceful introspective setting belies its proximity to vibrant downtown Shanghai and both forest and village tell an incredible story that involves a millennia of history, daring engineering feats and a philanthropic endeavour spanning hundreds of kilometres along the country’s eastern reaches.

The story begins in Jiangxi, the mountainous, cultural heartland of eastern China, approximately 800 kilometres southwest of Shanghai. The construction of a reservoir in the province in the early 2000s threatened the area’s historical villages and ancient camphor trees which had stood for more than a millennium.

In response and in a bid to preserve the region’s vanishing past, this project spanning over a decade, entailed the disassembling, relocation and restoration of more than 30 villages, comprising 50 Ming and Qing dynasty houses chosen for preservation, and 10,000 ancient camphor trees.  A rescue team of botanists, engineers, architects and master craftsmen, the latter of which documented fine architectural details for their later reconstruction, together confronted this epochal challenge.

The houses were painstakingly disassembled piece by piece, not only revealing their history, but also the ancient building techniques used in their construction.  Ornate carvings and elaborate stone reliefs, which would have taken up to ten years to carve, depicted family histories dating back more than 2,000 years. These, and other architectural elements, joined the rescued camphor trees on a long journey, via a fleet of flat-bed trucks, to Shanghai where they would later be resurrected.

The task was not without danger. Some of these majestic trees weighed up to 50 tonnes and were 100 feet in height, and the area destined for the reservoir was mountainous. Flash floods overturned trucks and shattered the temporary bridges constructed to access remote villages. But the team persevered in a race against time to Shanghai, in order for each tree to have the best of chance of survival.

Once in situ, trees were planted in native soil, facing the same direction as they had previously. After three years of careful nursing, almost 80 percent of the trees survived.  An old factory was used to safely store and catalogue the disassembled houses before they were restored by craftsmen, the few remaining in China with knowledge and skills to reassemble the ancient pieces. Contemporary structures were built alongside the reassembled ancient houses, creating a peaceful sanctuary that is now a living reminder of Jiangxi’s past and an Aman with timeless appeal.

Within easy reach of Shanghai and set on just over 100 acres filled with the rescued millenarian trees and ornamental lakes, the resort comprises an Aman Spa with two pools; six dining venues; and Nan Shu Fang, a serene garden centred by one of the Antique Villas, curated as a space for contemplation, learning and discussion.  The resort’s New Suites and Villas complement the 24 restored Antique Villas, complete with contemporary interiors and private pools.

The architecture, led by Kerry Hill, embodies the essence of Chinese traditional culture, carefully blending the old with the new. This sensitive restoration has not only secured the future of these historic houses, but has enabled the forest to flourish in its new home.

Vladislav Doronin, Chairman of Aman, said ‘Every Aman has a story to tell and this one is no exception. This project and the many challenges it presented were unimaginable, but we overcame them not only to defy the test of time, but to push the boundaries of traditional hospitality. This resort, a legacy to the past, stands proud as an archive for future generations.  I am especially grateful to Ma Dadong, the mastermind behind this unique restoration project and whose foresight and determination has made it possible to preserve the magnificent history of China for generations to come.’

Ma Dadong, the lionhearted entrepreneur behind this ambitious rescue and restoration project, and a native of Jiangxi, said, ‘We human beings with our short lifespan are nothing but a fleeting traveller at a moment in time. As a guardian of the past, I realised the only way to protect and celebrate our history was by instilling a new life and purpose into these ancient homes, and to allow the sacred trees that surround them, to be animated with renewed spirit.  Much like the ornate stone carvings and the stories they hold, this ambitious project will continue to recount and nourish the next generation with hopes and expectations for the future’.

Aman’s first property in Shanghai, its fourth in China, will present guests with a continued insightful journey through the country. It follows Aman Summer Palace in Beijing, a selection of heritage imbued dwellings a few steps from the Summer Palace grounds, Amanfayun in Hangzhou, a restored Tang dynasty village set amongst former tea plantations and bamboo groves and located adjacent to seven Buddhist temples, and Amandayan which embraces Nakhi culture and which lies on a hillside above the UNESCO-protected Old Town of Lijiang.