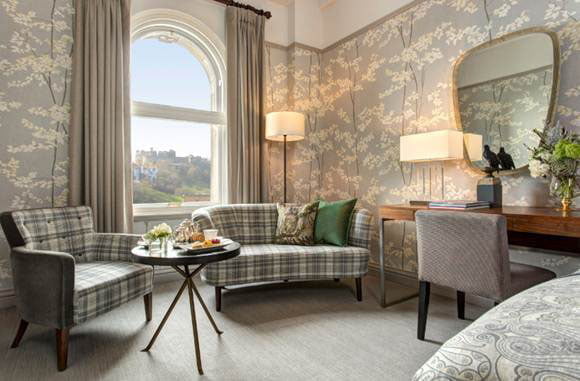 The Balmoral, the Rocco Forte Hotel in Edinburgh, is undergoing a multimillion pound refurbishment that will be unveiled in summer 2017.

The three-month modernisation project is led by Olga Polizzi, Rocco Forte Hotels’ Director of Building & Design, and sister to Sir Rocco Forte. For over a century, The Balmoral has found a home at Edinburgh’s most prestigious address, No. 1 Princes Street. As Rocco Forte Hotels celebrates its 20th anniversary, it is only right that the attention is turned towards the hotel that marked the beginning of Sir Rocco’s distinguished portfolio in 1997.

The hotel is one of Scotland’s most recognised landmarks and its majestic clock tower dominates the capital’s skyline, while its castle views are some of the city’s most coveted. Focusing on these views, the hotel’s west wing, including its 37 castle-facing rooms, Deluxe Suites and the renowned JK Rowling Suite, is undergoing a restyle along with its three main function suites.

The new rooms and suites will embody a Scottish woodland theme that adds a touch of magic and romance to any stay in the city. A colour palette of blues, greens, greys and purples will evoke the lochs and heathers from the hills, bringing the Scottish landscape inside.

The renovated rooms and suites are integral to Rocco Forte Hotels’ ongoing dedication to its suite offering. Rocco Forte Hotels has unveiled The Rocco Forte Suite Experience, a new concept across each of the eleven hotels, giving guests an indulgent stay from the moment of arrival to departure. In line with this, The Balmoral is set to unlock the secrets of the city with a range of new itineraries, including its Taste of Scotland Experience during which guests can source and cook the very best of Scotland’s produce under the watchful eye of Brian Grigor, Head Chef at Michelin-starred restaurant Number One.