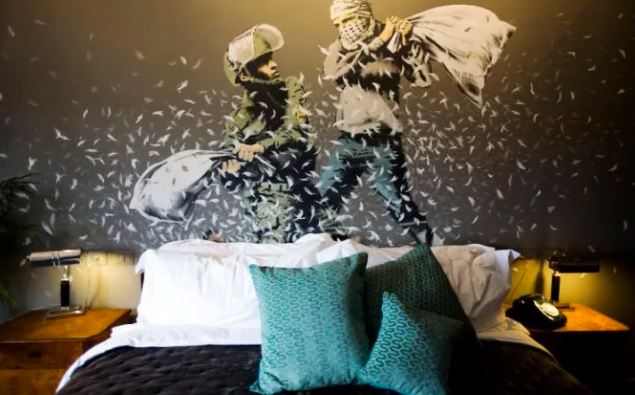 The elusive British artist, Banksy, has opened a hotel wedged up against the Israeli security wall that wraps around Bethlehem.

The 10-room Walled Off Hotel – built in the style of a colonial club, complete with delicate china and deep leather sofas – stands in the shadow of a wall considered illegal by most of the international community.

All of its rooms look out onto the wall’s bleak concrete slabs and its upper floors stand eye-to-eye with the Israeli watchtowers that loom over parts of Bethlehem.

The hotel was built in complete secrecy over a 14-month period, surprising even Palestinian officials when its doors suddenly flew open on Friday.

Banksy has gone to great lengths to disguise his identity and if he was present for the opening day, he did not make himself known. Instead a two-page press release described his vision for ‘a three-storey cure for fanaticism, with limited car parking’.

The hotel is aimed at attracting foreign visitors to a corner of the occupied West Bank where they might not usually stay, at once giving a badly-needed boost to the Palestinian economy and showing them the realities of life surrounded by the wall.

The hotel opening is designed to coincide with the centenary of the Balfour Declaration, the 1917 statement by the British government in favour of a Jewish homeland that helped pave the way for the creation of Israel.

“It’s exactly one hundred years since Britain took control of Palestine and started re-arranging the furniture – with chaotic results,” Banksy said. “I don’t know why but it felt like a good time to reflect on what happens when the United Kingdom makes a huge political decision without fully comprehending the consequences.”