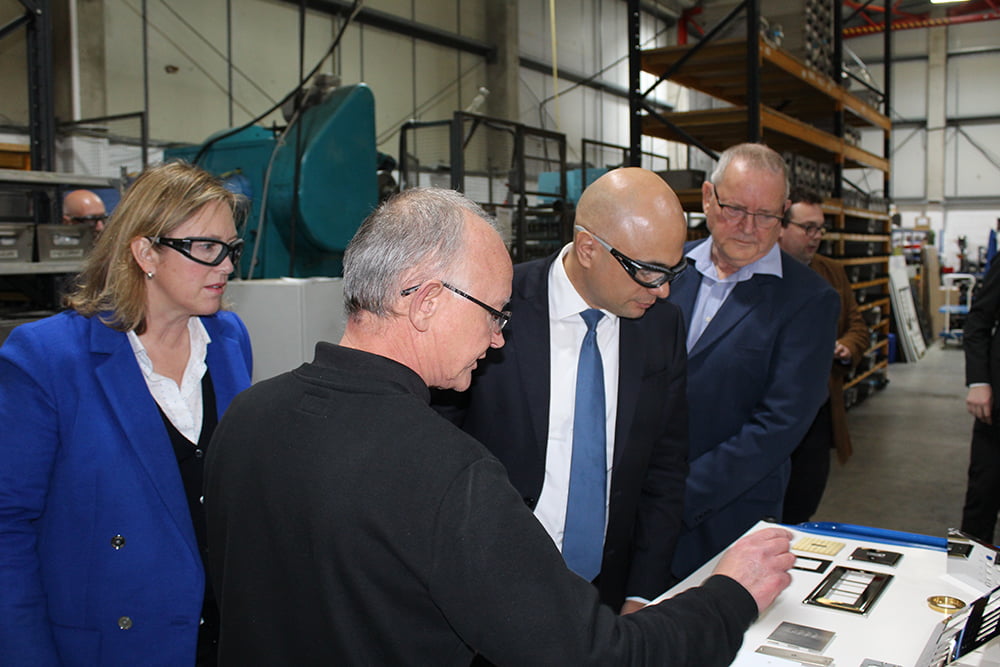 The Right Honourable Sajid Javid, Chancellor of the Exchequer and Conservative Party MP for Bromsgrove was welcomed by Roger Kemp, chairman of electrical wiring accessories manufacturer Focus SB in St Leonards on Sea on Friday 22nd November, the same day as the company announced the opening of its 7th sub distributor showroom Fudi in China, at a private launch event. Mr Javid enjoyed a private tour around the head office and factory premises based on the outskirts of Hastings, accompanied by local Conservative Party candidate Sally-Ann Hart, to discover how the British manufacturer has risen to the challenges of forthcoming Brexit, deal or no deal, and local issues impacting business operations.

Mr Kemp was delighted the British manufacturer had attracted the attention of the Chancellor of the Exchequer, who requested a private tour to go behind the scenes to learn about the success story behind the business which saw it become the first and only UK manufacturer in its industry to be licensed to export products to China in 2017.

Kemp commented: “We are pleased to welcome Sajid Javid to our factory today. It gives recognition to all the hard work put in by our employees and our partners in China to make a success of opening up the China market for our electrical accessories, where we now have seven showrooms and 10 sub distributors.”

Focus SB’s research and development into a new product range for China is just one in a recent string of ongoing major investments made by the company since managing director Gary Stevens’ appointment in January 2016, which have included the purchase of an advanced 3D printer; robot cell; expansion into additional premises and growing the workforce. Recently awarded ‘Most Dynamic Employer’ by local charity Little Gate Farm, the company’s impressive future plans were of considerable interest to Mr Javid as Focus SB looks set to provide real prospects to resident job seekers in Hastings, which is one of the more deprived coastal towns in Sussex, despite being one of the richest in culture and diversity.

Mr Javid himself is no stranger to coastal communities and the challenges to businesses in these areas, and delivered a £40 million cash boost in 2017 announcing. “This latest investment delivers on the government’s manifesto commitment to support fishing and coastal communities, and create an economy that works for everyone.” The then Communities Secretary Sajid Javid said: “We’re backing the Great British Coast with £40 million to create new jobs, boost economic growth and increase tourism.”