Luxury cruise line Cunard has announced the world-class team of designers recruited to create the interiors for its eagerly anticipated new ship.

Award-winning designers Simon Rawlings (David Collins Studio), Terry McGillicuddy (Richmond International) and Sybille de Margerie (Sybille de Margerie Paris) are already working with the ship’s globally renowned Creative Director, Adam D Tihany. Cunard’s fourth ship, which is set to join the fleet in 2022, is yet to be named but will be built at the Fincantieri shipyard in Italy.

“The calibre of talent we have brought together for this project will bring to life our vision of creating a truly world-class ship. Working alongside the legendary Adam D Tihany, the team is working hard to ensure that every aspect of our new ship is exciting and forward-looking, yet unmistakably Cunard.” says Simon Palethorpe, President, Cunard.

Adam D Tihany, Creative Director, added: “We have assembled a dynamic, passionate team of talented creatives whose unique design sensibilities and innate understanding of the Cunard brand will move the dial forward while recapturing the beloved spirit of Cunard travel in this next generation cruise liner.”

While design details of the new ship are still under wraps, Cunard can confirm some of the key spaces that the expert design teams will be bringing to life:

The new ship will be the 249th vessel to sail under the Cunard flag and will bring the luxury line’s fleet up to four, for the first time since the 1980s. She joins Queen Victoria, Queen Elizabeth and the flagship Queen Mary 2.

An instant love affair with an 18th century palace led to the recent opening of Paragon 700,... 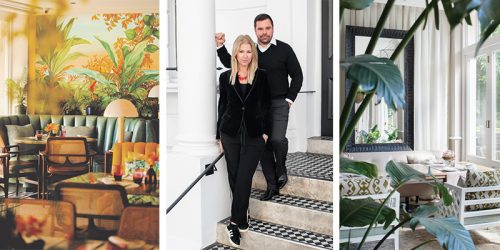 When Inge Moore and Nathan Hutchins formed Muza Lab four years ago, it was with a sense of w...