DOWNTOWN BROOKLYN GETS A NEW HILTON 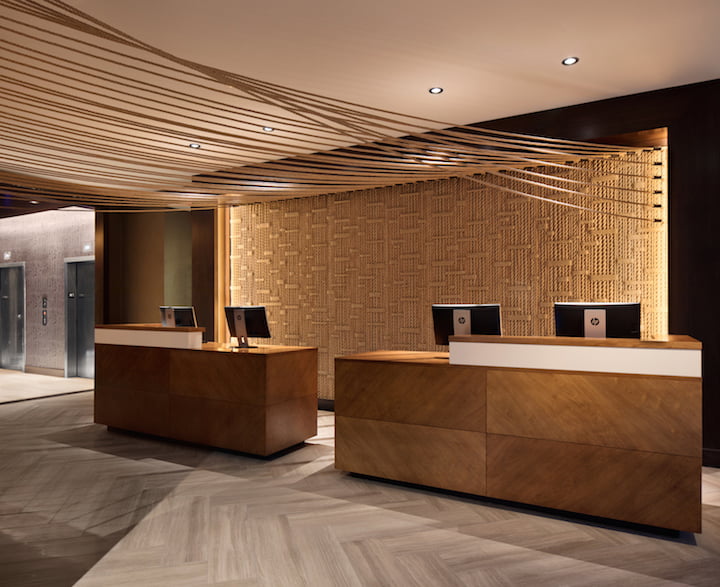 Within walking distance of attractions such as the Barclays Center, BAM (Brooklyn Academy of Music) and Brooklyn Bridge Park, Hilton Brooklyn New York offers a welcoming environment with a distinct sense of place. Stonehill & Taylor’s urban, contemporary design is inspired by the hotel’s Schermerhorn Street address, which dates back to the early 19th century. Taking its name from influential shipping businessman Peter Schermerhorn, the exceptionally long street running from Smith Street to Bond Street was originally the site of his “ropewalk.” The required length of rope was to be “walked” while it was twisted, serving the ships in the Brooklyn Navy Yard. References to rope-making and maritime life are weaved into the design, merging historic Brooklyn with the current cultural landscape.

Hilton Brooklyn New York’s lobby is comfortable and polished, with materials and textures layered to create diverse areas for lounging and socialising. At reception, a wall of woven, intertwined rope creates a bold moment for arrival. Several strands of rope extend from the wall and are draped overhead before dropping down into a low millwork wall, forming a screen between reception and the lobby. Throughout the lobby, herringbone marble floors are paired with a warm material palette, mixing metals with accents of black, burgundy and saturated navy.

The rope-making motif continues throughout the hotel’s guest rooms, including four suites, and the guest corridors. As guests enter the elevator lobby, they are met with a mirrored triptych screen-print with a Brooklyn Bridge marathon scene. Corridors are covered in navy blue carpeting with an unravelling rope graphic, while wallcoverings feature a series of vintage Brooklyn map prints.