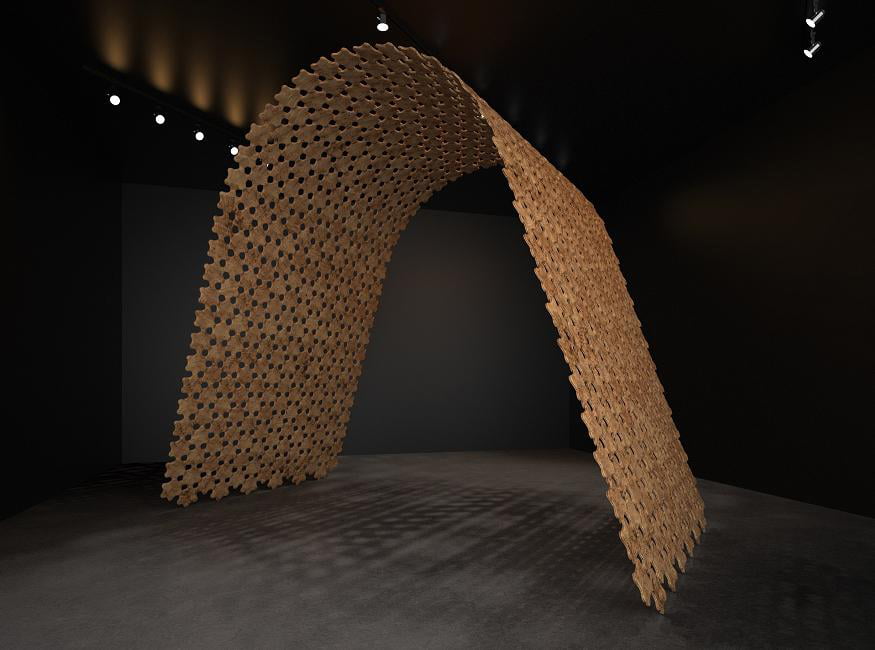 During Dubai Design Week, one of the major design events of the year, will take place between 24-29 October. Six pavilions exhibit the work of the region’s most exciting curators, designers and studios and this year’s theme invited designers to produce work inspired by ‘The Human Senses.

Rawan Kashkoush, Creative Director of Abwab, said: “The Abwab pavilions are a microcosm of diversity each year, showcasing design in a format that brings the region closer together. Sat side by side, the ideas of each of the countries are emphasised. The exhibitions tell of their origins more clearly when we are able to read them all at once.”

Located within the walkways of d3, Abwab will be housed in a pavilion cluster designed by architects Meitha Al Mazrooi, Hatem Hatem and Fortuné Penniman of UAE-based architectural practice A Hypothetical Office. Integrated within the d3 site, the pavilions will be made from a re-appropriated greenhouse structure to form a ‘housh’ or courtyard, a playful nod to Arab neighborhood nostalgia that is both enclosed and permeable. Paths of filtered light and shady, canopied public spaces allow for access and pockets to converse in – the negative space acts as a harbour and gathering space for visitors.

Hatem Hatem from A Hypothetical Office said: “The structural language of the Abwab pavilions will be composed of faceted surfaces that provide intimate enclosures, lit by lighting specialists Acdc. The surface material is a form of woven plastic mesh that allows for light and transparency, enclosed between a field of columns and delimited by reclaimed rubber flooring donated by Bee’ah.”

Mohammad Saeed Al Shehhi, Chief Operations Officer of d3, said: “One of our ambitions at d3 is to fully enable creative potential and our flexible spaces here at d3 allow us to offer a platform for artists and designers to showcase their work within a suitable infrastructure. In working with Downtown Design and Hypothetical, we are proud to establish the Abwab series and help champion some of the best examples of design from the MENASA region.”

The vast quantity of millennia-old artefacts found in archaeological sites throughout Bahrain is testament to the island’s ancient art of pottery. The Bahrain Authority for Culture and Antiquities has appointed interdisciplinary designer Othman Khunji and architect Maitham AlMubarak to design an accessible and interactive interface and video installation to teach visitors the value and heritage of this largely forgotten, traditional craft.

Olive wood-carving represents a third of the artisanal industry in Bethlehem, but cheap imports and mass customization are threatening this tradition which has its roots in the 16th century. French-Palestinian architects Elias Anastas and Yousef Anastas have created an innovative olive wood structure in the Palestine pavilion that celebrates the imperfections of the olive wood master carvers’ craft.

India has been producing world-class encaustic cement floor tiles for almost a century and to reference this artisanal history, multimedia artist duo Thukral & Tagra have built an interactive ‘Memoir Bar’. Visitors can write down a memory or emotion, record it in their own hand-made, hexagonal floor tile and add it to this ‘library of memories’ where they can deposit, transfer or exchange it for another one.

In the United Arab Emirates pavilion, curator and multidisciplinary designer Salem Al-Qassimi and Maryam Al Qassimi draw inspiration from the ubiquitous cafeteria’s that have become an integral element of the Emirati culture. As a cultural concoction, the cafeteria is a mélange of disparate tastes, visuals, and ideas coming together to form a multicultural singularity. The pavilion titled Afaaq Al Mustaqbal, attempts to highlight the many layers of this cultural phenomenon.