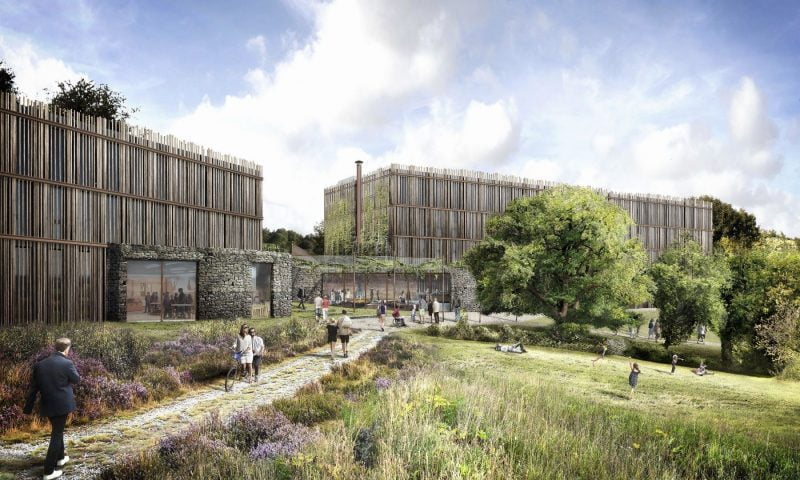 New plans for an £8.5m, 109-bedroom hotel to be developed within the Eden Project have been submitted to Cornwall Council.

Planning permission for an on-site hotel was originally granted by the council in June 2015. A revised design with additional facilities was submitted in May 2016, but was later withdrawn following public concerns about the visual impact and scale of the proposals.

The new property will be split into two blocks in a bid to reduce its visual impact. Local stone cladding will be used at the lower level of the buildings, and locally-sourced timber poles are designed to set the main accommodation blocks into the surrounding landscape.

Existing features in the area, including old trees and stone walls, will be incorporated into the design of the grounds, while new features, such as a meadow and orchard, will be planted around the hotel.

The visitor attraction said the hotel has been designed to ‘blend into the countryside’ and have high standards of accessibility, energy-efficiency and sustainability.

If the plans are approved, the Eden Project is aiming to start construction in late 2017 with an expected opening date of April 2018.

David Harland, executive director, said: “We have always aspired to have a hotel at Eden and this is the culmination of years of work towards that aim.

“We feel that hotel accommodation at Eden would not only give an attractive option to our day visitors, but also increases Eden’s appeal as a venue for weddings, conferences and events. This is part of our plan to enhance the year-round sustainability of Eden’s business.”

More than 18 million people have visited the Eden Project since it opened in 2001, contributing more than £1.7bn to the Cornwall economy.