Former US Embassy to become second London home for Rosewood 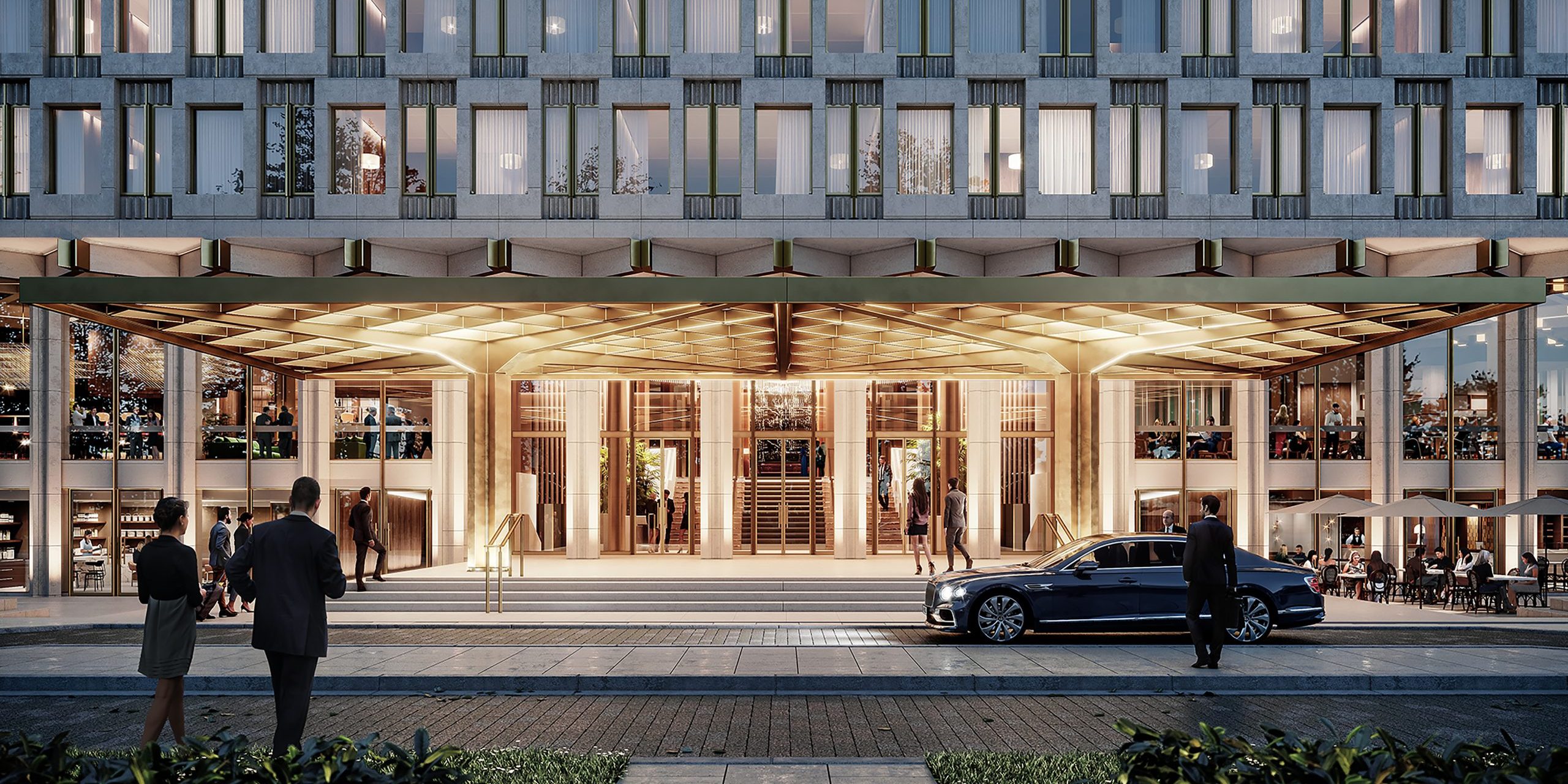 The former US Embassy, housed at 30 Grosvenor Square London is set to become the Rosewood brand’s second home in London, Qatari Diar has announced. Recognised for delivering some of London’s most celebrated landmark schemes, the development is the latest example of Qatari Diar’s continued investment into the UK. The Grade II listed building is currently being reimagined by British architect Sir David Chipperfield as a new retail destination and a Rosewood Hotels & Resorts®’ luxury hotel.

Qatari Diar’s plan for The Chancery Rosewood will form part of a new-look Grosvenor Square. Multiplex have been awarded the contract, with the main construction works commencing in 2021. Once open, a new landmark to the Mayfair neighbourhood and the square will emerge as a vibrant hospitality and retail destination.

The ambitious project will include a variety of retail spaces within the building, opening onto a newly created public realm to support the future plans for the enhancements to the Square. These units will face the square and create a permeable and accessible ground level as the hotel opens up and connects with its surrounding public realm. The Chancery Rosewood will deliver a significantly revitalised public realm and the creation of a world-class destination.

As with their other landmark schemes such as Chelsea Barracks and Southbank Place, Qatari Diar are committed to ensuring the historic location is given a new lease of life for future generations. With nearly £4bn invested to date in UK real estate projects, once The Chancery Rosewood and all other UK projects are completed, they will have a combined value of £7bn.

Abdullah bin Hamad Al-Attiyah, CEO of Qatari Diar, commented: “The announcement of The Chancery Rosewood name and the award of the contractor appointment to Multiplex marks a significant milestone in the transformation of Grosvenor Square, and is a project that we are extremely proud to be delivering as part of our ongoing investment into UK real estate.

“Our vision at Qatari Diar is to revitalise this public space through the creation of a world-class hotel destination, and in turn inspire the wider regeneration of central Mayfair. Alongside the development of The Chancery Rosewood, our investment will create significant enhancements to the area to help reconnect it to the Mayfair neighbourhood. We’re looking forward to seeing this and the hotel development take shape with Rosewood Hotels & Resorts in the near future.”

Callum Tuckett, Managing Director of Multiplex, said: “Multiplex is very proud to be awarded the contract for The Chancery Rosewood, continuing the productive relationship we have built with Qatari Diar on their Chelsea Barracks development. We have assembled a fantastic team and look forward to working closely with Qatari Diar to deliver an exceptional new destination in this historic part of Mayfair – safely, sustainably, and to the highest quality standards. Grosvenor Square is a part of London we know very well, having delivered several other projects in the area, and the relationships we have in place will help ensure that we maximise the benefits this project creates for the local community.”

The Chancery Rosewood provides Rosewood Hotels & Resorts the unique opportunity to create an ultra-luxe residential atmosphere, with the aim to establish a new benchmark for modern luxury and attract a global and local clientele to set the new benchmark in luxury hotels.

The Chancery Rosewood destination will include 139 spacious guest rooms and suites designed by Joseph Dirand, publicly accessible spaces including a variety of formal and casual dining and entertainment spaces, a Yabu Pushelberg designed Asaya integrative wellness facility, five flagship retail spaces and a grand ballroom with space for up to 750 guests. The designers behind additional F&B outlets will include Tristan Auer and Bar Studio.

The Chancery Rosewood name was ultimately chosen for its relation to the building’s history and original purpose. Invoking a sense of grandeur and importance, the name celebrates its origins as the first purpose-built chancery in London. Architect Eero Saarinen’s mid-20th century Mayfair landmark previously housed the US Embassy before its relocation in 2018 and Qatari Diar’s acquisition in 2009. The US commissioned Saarinen to design the original building which opened in 1960. His listed grand facade dominated the western border of Grosvenor Square, with the building and its surroundings becoming synonymous with the UK’s diplomatic relationship with the US.

Radha Arora, President of Rosewood Hotels & Resorts: “At Rosewood, each element of our properties are informed by the unique nuances of the destinations in which they reside. The Chancery Rosewood will realise this Sense of Place® philosophy in new and innovative ways, as evidenced by the hotel’s new name, which pays homage to the Mayfair landmark’s storied past. It is an honour to work with such a talented team of architects and designers who share our mission of bringing an unparalleled, ultra-luxury lifestyle experience to one of London’s most iconic neighbourhoods, and we thank our partners at Qatari Diar for the opportunity to be a part of this incredible project.”

David Chipperfield Architects’ scheme aims to restore Saarinen’s vision of creating a ‘palace on the park’. The grand piano nobile level will be opened up again to welcome both hotel guests and the public, extending the hotel and retail experience beyond the building and into the redeveloped garden square. The building’s original features and mid-century characteristics have been retained, including its Grade II listed façade and unique diagrid ceiling which have been restored and repurposed. In addition to the retained fabric on site, more than 4000 individual elements have been carefully disassembled for cleaning and refurbishment before being reinstalled into the building during the final construction phase. These elements include original details such as stone cladding for the interior, mullions, window handles and most prominently the golden eagle sculpture crowning the building.

David Chipperfield, principal of David Chipperfield Architects: “Through this project we are seeking to remain true to Eero Saarinen’s original vision for this building, converting it for a new role that maintains much of its original architectural character and civic presence. It is a great responsibility to work with this piece of young heritage, mediating with the past in order to ensure its future. We look forward to continuing the work on site and bringing this remarkable building back to the city.”

The Chancery Rosewood’s interior scheme is led by globally renowned French architect Joseph Dirand. As a longtime admirer of Eero Saarinen’s modernist style, working on the project was a thrilling opportunity to transform the space into something welcoming. His designs for the ultra-luxe guest rooms and public spaces are both intimate and glamourous. The scheme utilises a warm palette which will largely feature walnut panelling, marble and brass. The perfect counterpoint to Chipperfield’s renovation, Dirand has incorporated the warmth and intimacy of a British member’s club with the shapes and textures of Art Deco. His signature style of art de vivre will be felt in every corner of the building.

Joseph Dirand of Joseph Dirand Architects, “What would be a better dream for an architect than to be able to reinvent the future of such an iconic mid-century building in the middle of Mayfair by Eero Saarinen? This modernist landmark has been the headquarters of the US Embassy for more than 60 years. Originally conceived as a fortress and inspired by the Palais des Doges in Venice, it will now become the New British palace of hospitality and lifestyle.

“In respect to Saarinen’s original creation, I have tried to imagine a modern interpretation of the traditional British gentlemen’s club; full of warmth and intimacy, and inspired by the sophistication of the Art Deco of the Roaring Twenties combined with the creativity and glamour of the swinging sixties.

“To respond to this impressive architectural monolith, the interior will be dressed like a modern dandy. Bringing softness and warmth through the different spaces, we used a warm palette of material largely covered with walnut wood paneling along with marble and brass.

“The idea was to translate the soul of this sophisticated city and its classical architecture into a new ornamental vocabulary specific to this singular building and project. We are bringing this iconic place into the future for its second life, where it will be more generous and playful.”

Qatari Diar are committed to creating buildings that minimise their environmental impact, and The Chancery Rosewood is aspiring to be the first five-star hotel within the UK to achieve a BREEAM Excellent sustainability rating. In addition, the proposed development aims to significantly improve the site’s biodiversity through the use of extensive green roofs, maximise opportunities for minimising water consumption, implement passive design and energy efficiency measures and ensure a positive impact on the local community through local employment, local expenditure and local education.