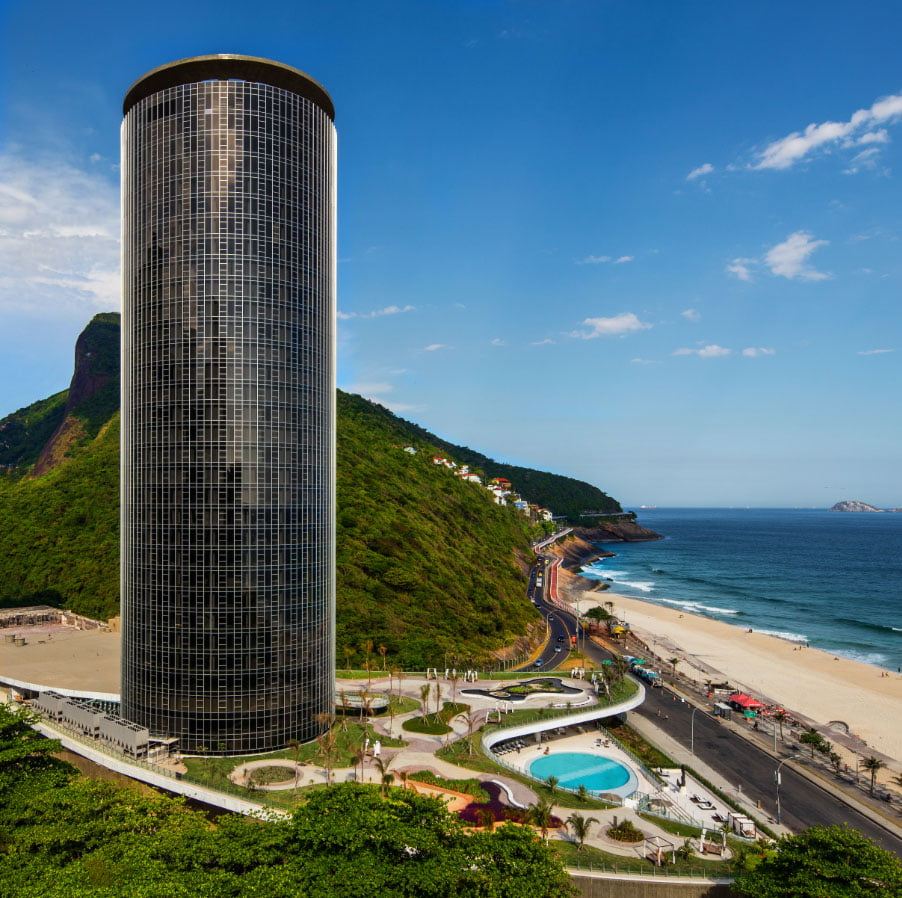 Originally built in 1972 by the world-renowned architect, Oscar Niemeyer, the famous ‘Hotel Nacional’ has reopened after more than a decade of being left abandoned, as the Gran Meliá brand’s flagship property. Following extensive renovations, the property has been restored to its former glory, maintaining the hotel’s original features, with the modern Spanish flare of the Gran Meliá brand.

During its heyday, in the 70s and 80s, Hotel Nacional was renowned as a celebrity hot-spot, with A-list guests staying at the hotel, including Liza Minnelli, BB King and James Brown. Hotel Nacional also hosted the spectacular Rio Film Festival.

Recognised as a national heritage site, Gran Meliá Nacional Rio houses some of Brazil’s most treasured modern art. The entrance of the hotel features the incredible “Painel de Carybé” created by Hector Bernabó (aka Carybé), a painter, sculptor, historian and journalist. The artwork includes 270 individually sculpted concrete slabs depicting classic carioca characters. Burle Marx’s gardens are also a stunning legacy belonging to the hotel and feature 46 species of native Brazilian plants and classic paving stones, known as “calçado”, which have been imported from Portugal. Roberto Burle Marx was a Brazilian landscape architect whose designs of parks and gardens made him world famous. He is accredited with having introduced modernist landscape architecture to Brazil.

Renowned Brazilian interior designer, Débora Aguiar has also designed all of the communal areas of the hotel, including the VIP floor and the rooftop.

Located in the South Zone of the city, Gran Meliá Nacional Rio boasts 413 rooms, from 33 to 300m², including one presidential suites and 66 executive suites. The circular design and glass façade of the property means that guests can enjoy panoramic floor to ceiling views of Rio de Janeiro from both their room or suite and the communal areas.

Gran Meliá Nacional Rio will feature the exclusive RedLevel service, offering the ultimate luxury experience from the Gran Meliá brand. It provides access to exclusive spaces allowing guests to enjoy a privileged sense of privacy and tranquillity, as well as a more personalised service. The RedLevel Lounge has a private reception area, lounge-library with TV and music, private breakfast area and an open bar with premium drinks. RedLevel will be fully operating from April 2017.

It features two restaurants including Sereia and the signature restaurant. Located near the pool, Sereia specialises in Mediterranean cuisine with a Spanish touch. It is named after the stunning sculpture of a mermaid, created by Alfredo Ceschiatti, which stands at the front of the hotel looking out onto the ocean. Located on the 32nd floor, the signature restaurant will serve avant-garde cuisine, by highly acclaimed Brazilian chef, Felipe Bronze, set against the stunning backdrop of Rio de Janeiro. The restaurant is scheduled to open in April 2017.

The hotel also has three luxurious, contemporary bars, Bardot pool bar, Amaro and the roof top bar. The exclusive Roof Top Bar boasts 360-degree views across the city and São Conrado Bay. It is the perfect place to enjoy the sunset whilst sipping on one of the delicious cocktails. An exclusive helipad located on the roof of the hotel offers direct access for VIP guests.

Gran Meliá Nacional Rio is moments from São Conrado beach, one of the city’s most beautiful coastal spots. Popular with celebrities, the neighbourhood is also renowned for The Fashion Mall, with over 150 designer brands, and an abundance of chic restaurants and bars.

The hotel boasts the only Spa by Clarins in Latin America and is a luxurious wellness space dedicated to health, beauty and sensorial experiences. There is also a luxury fully-equipped gym and fitness studio with personal trainers.

Gabriel Escarrer, Vice Chairman and CEO at Meliá Hotels International, said: “Rio de Janeiro is a city with a huge amount of history, incredible architecture and a booming luxury market. The outstanding cultural heritage, art and natural scenery available in the city really enriches the traveller’s experience. We are very excited to finally launch this unique property with such a huge historical significance in one of Latin America’s most important cities and we believe it has the potential to bring back the time of splendour of the city’s tourism.”