With a presence spanning 76 countries, Hard Rock International continues the expansion of its growing hotel portfolio with the opening of Hard Rock Hotel Amsterdam American, bringing its signature music-infused energy to this lively European capital.

Now open, the hotel states that the health and safety of their guests and colleagues remains top priority, and that as such the hotel has opened in compliance with all local regulations, government guidelines and Hard Rock’s new SAFE + SOUND programme. Developed by a team of hospitality experts in collaboration with worldwide health and sanitisation specialists, the SAFE + SOUND programme is a series of carefully developed protocols ensuring the highest standards of hygiene and cleanliness. These practices are being implemented across the brand’s portfolio and includes a 272-point inspection upon opening.

Located on the central square of the vibrant Leidseplein district, a renowned cultural hub in the heart of Amsterdam boasting iconic venues and world-famous entertainment, the 173-room Hard Rock Hotel Amsterdam American resides in one of the city’s most famous Art Nouveau buildings, a UNESCO Heritage site formerly known as the American Hotel. Built in 1903, the historic building has been transformed, sporting renovated interiors by Feran Thomassen, whilst also maintaining its historic decorative features, such as Art Nouveau stained-glass windows and chiaroscuro paintings. The hotel walls are also adorned with signature Hard Rock memorabilia, including prized possessions from artists such as Elton John, Slash and John Lennon.

“Amsterdam is an entertainment hotspot with an incredible atmosphere, and the perfect place to welcome a Hard Rock Hotel.” Dale Hipsh, Senior Vice President – Hotels, commented. “We are honoured to see our latest hotel open in such an iconic city with deep musical roots, bringing Hard Rock-signature hospitality to one of the liveliest areas in Amsterdam.” 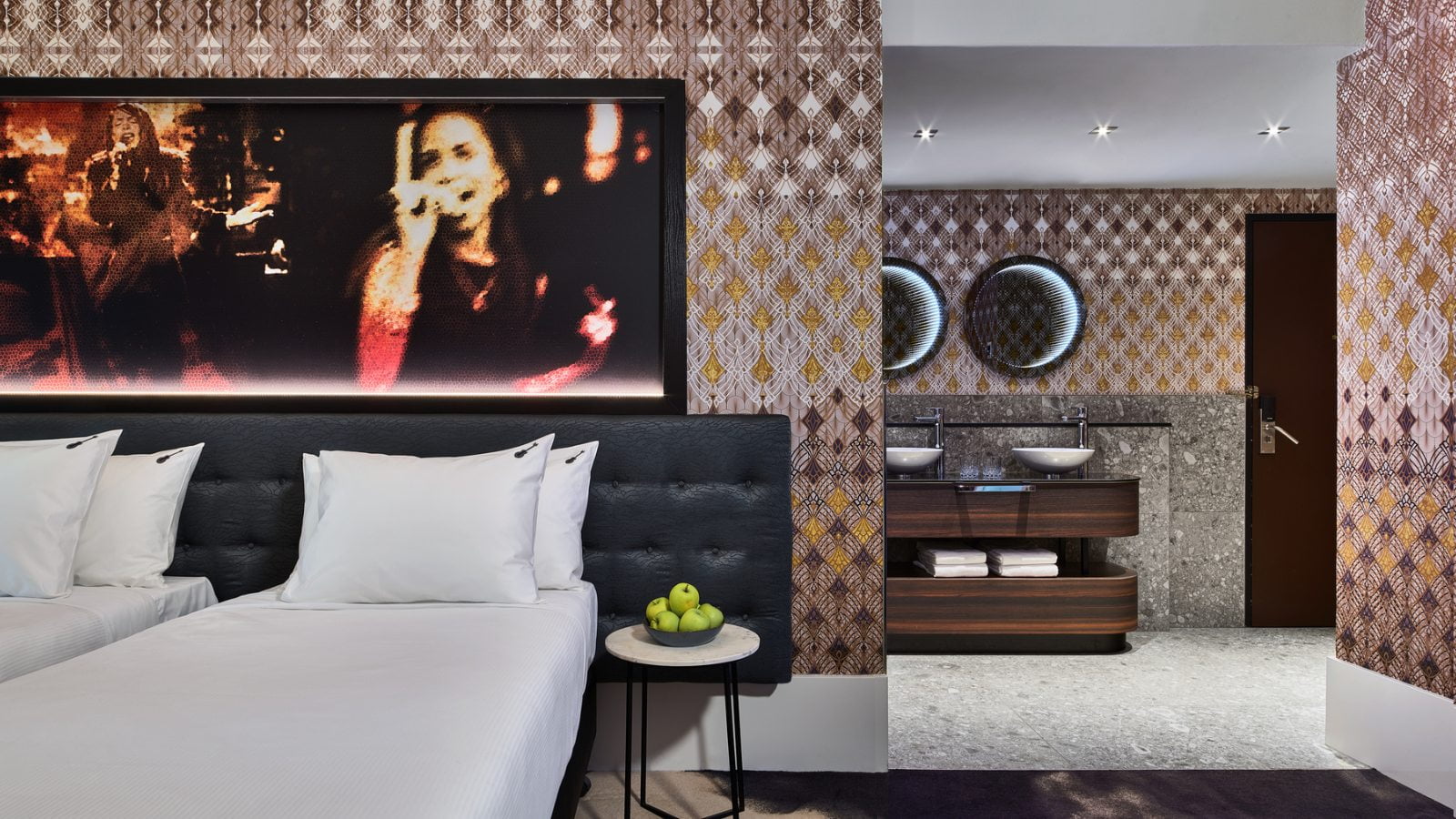 A National Heritage site, the historically famous Café Americain takes residence within the hotel, combining classic décor and contemporary cuisine, offering a modern twist to popular classic dishes using Dutch ingredients and locally sourced produce. Adjacent to the Café is Bar Americain, an iconic destination amongst locals and visitors, welcoming an array of famous artists over the decades, reflected in the celebrity photographs adorning the walls. Visitors can enjoy a Dutch bitterballen or craft cocktail on its terrace, or enjoy a drink at the hotel’s lobby bar, GMT +1. GMT +1 doubles as an event space, alongside Mata Hideaway, a secluded meeting room inspired by the Marrakesh Express. The two areas combine to create over 230 square metres of meeting space, the ideal location for social events or corporate gatherings.

“To us, becoming the first Hard Rock Hotel in The Netherlands, feels like the perfect match,” commented Léon Dijkstra, CEO of Eden Hotels. “The hotel has a very rich music history and is located near all the iconic venues Amsterdam has to offer. As Hard Rock Hotel Amsterdam American we will let music and culture live on in a place where artists have been coming together for decades.”

The hotel boasts Hard Rock’s brand-signature amenities, including The Sound of Your Stay®, where guests can reserve their choice of Fender guitar, complete with amp and headphones, or Crosley vinyl record player for an impromptu in-room jam session. Also on offer is Rock Om®, fusing the art of yoga with the beat of music, to deliver three melodic in-room yoga sessions. Hard Rock Hotel Amsterdam American will also feature Hard Rock’s Rock Royalty® service, offering use of a private Rock Royalty lounge and exclusive amenities such as complimentary minibar service in the rooms. The hotel is also home to a Body Rock® fitness centre and on-site Rock Shop®.