Hastings Hotels is delighted to be celebrating the 50th birthday of the jewel in its crown, the Europa Hotel. In recognition of this significant milestone, the Europa (the most bombed hotel in the world) will be hosting an interactive installation in the lobby depicting its impressive history and the finials outside the front of the hotel will transformed to golden. The hotel is also welcoming guests with brand new menus and cocktails inspired by the 1970s.

History
The world-famous hotel was built on the site of the former Great Northern Railway Station and was opened in 1971 by Grand Metropolitan Hotels. The Europa was then purchased by the late Sir William Hastings in 1993 after it was taken over by receivers at a time when it was hard to believe that Northern Ireland would be seen as a tourist destination due to the Troubles across the province. The pioneering hotelier invested £8M and reopened the hotel in 1994.

And whilst it is known as the world’s most bombed hotel, having been targeted 33 times between 1970 and 1994, the Europa is part of the peace story of Northern Ireland and has transformed into an iconic symbol of Belfast’s survival.

Celebrity Guests
The hotel is even better known for the celebrities that have stayed there over the years. In 1995, President Clinton became the first US serving President to visit Northern Ireland and stayed at the Europa. 110 rooms were booked for his entourage and Clinton returned to stay at the hotel in 1998. Other famous guests have included Brad Pitt, Julia Roberts, Bob Dylan, Lionel Ritchie, Victoria Beckham and Elvis Costello.

The Hotel Today
When it first opened, the Europa was 51 metres tall and had 205 bedrooms. Hastings Hotels has invested over £40m after continuous renovations over the last 30 years and the hotel now has 272 luxurious bedrooms and is currently in the process of a renovation programme which will see the 100 front-facing Superior bedrooms, 80 Classic bedrooms and five Suites redesigned and upgraded.

Julie Hastings, Marketing Director of Hastings Hotels said: “Despite almost constant challenges and setbacks, the Europa continues to stand proud as a beacon for Belfast’s unique enduring spirit. No other hotel in the world has the history to rival that of the Europa’s. My father had the courage and optimism to buy it when nobody else did. He invested heavily at the time despite the bombings that followed over the next three years. And it was this confidence that then led to Belfast, and Northern Ireland, to begin its journey to become the well-loved tourist destination that it is today.”

In Celebration
The story of the Europa was told in a book published 10 years ago called ‘In the Headlines’ because it always was! And now for this 50th celebrations there will be an interactive installation in the hotel’s lobby depicting its history for everyone to peruse and enjoy.  The well-known central finials down the front of the outside of the hotel will be changed to golden and the famous sign that can be seem across the city will be replicated inside the hotel for those Instagram pictures.  There will be menus, and cocktails offered from the 1970’s and the famous Hastings Hotels ducks will become golden.

Martin Mulholland, Head Concierge of the Europa Hotel and one of the longest serving employees added: “The Europa is a Belfast icon. Guests love its story, the characters that have stayed here and indeed its workers. The story of Belfast in the last 50 years can’t be told without mentioning the Europa – from being the first international hotel in the city to the last word in luxury. It has never rested on its laurels, constantly extending, refurbishing, and updating to maintain its reputation as the place to stay when visiting Belfast. It has been my absolute joy and pleasure to be ‘front of house’ welcoming our guests from around the world for the last 35 years.” 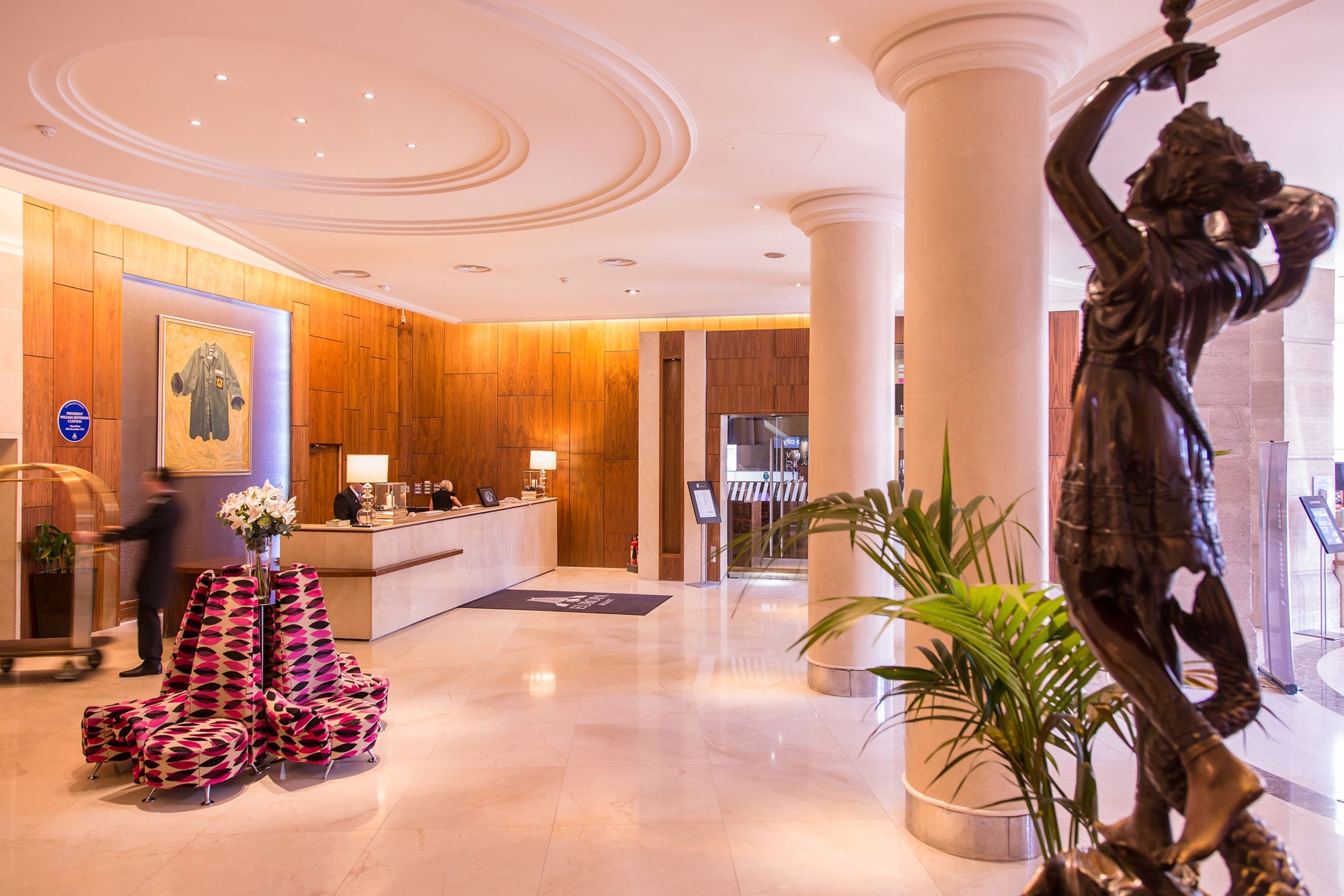 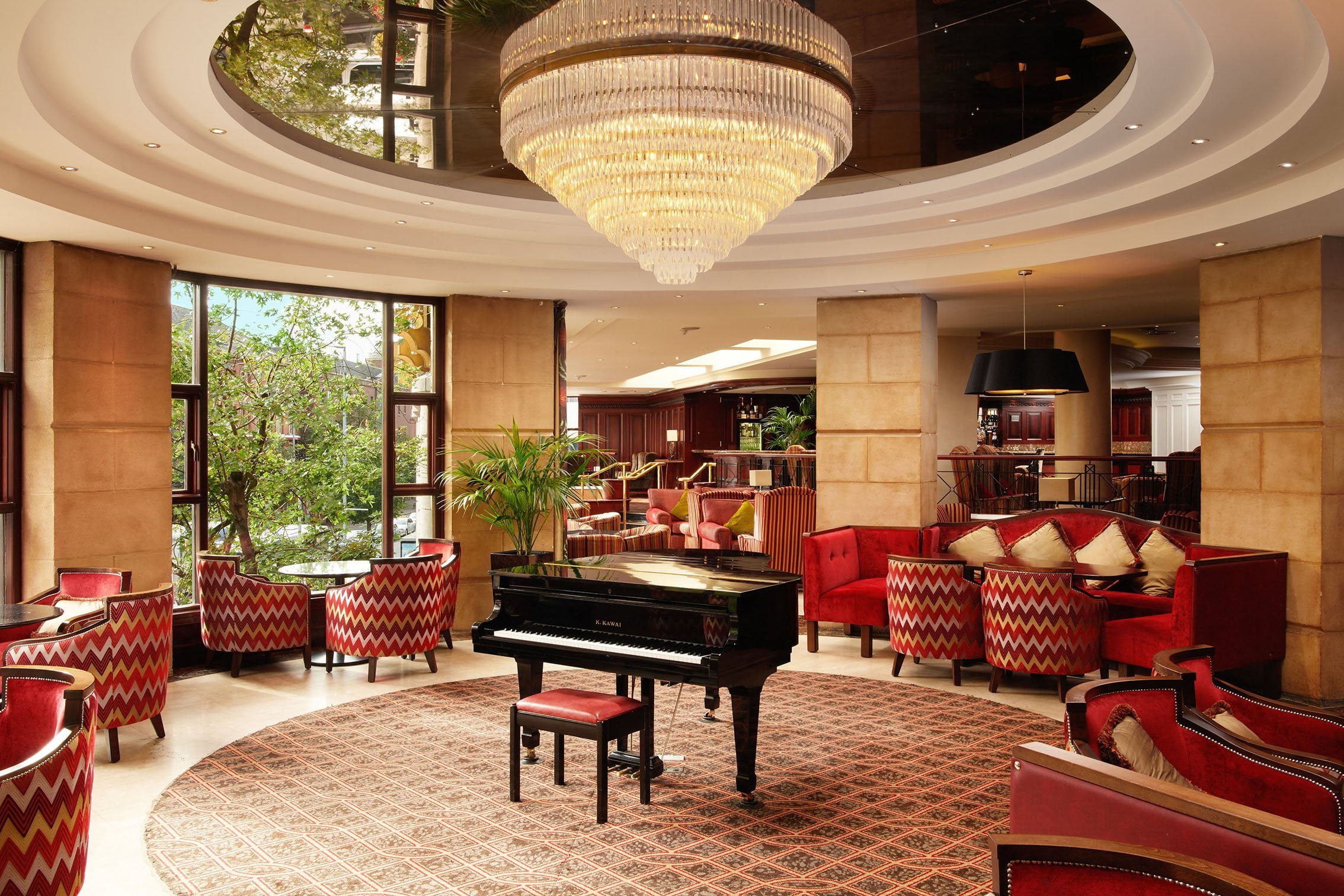 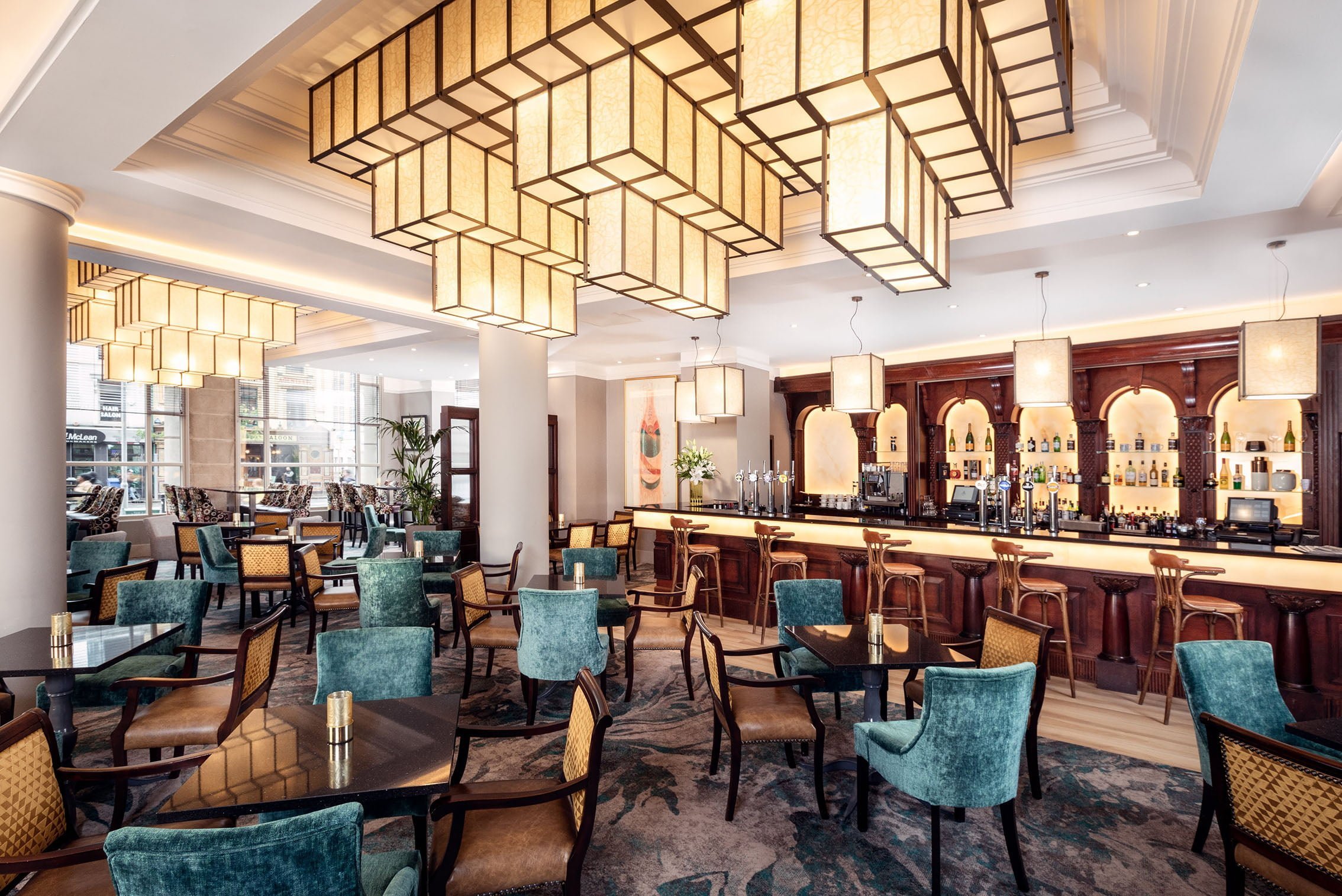 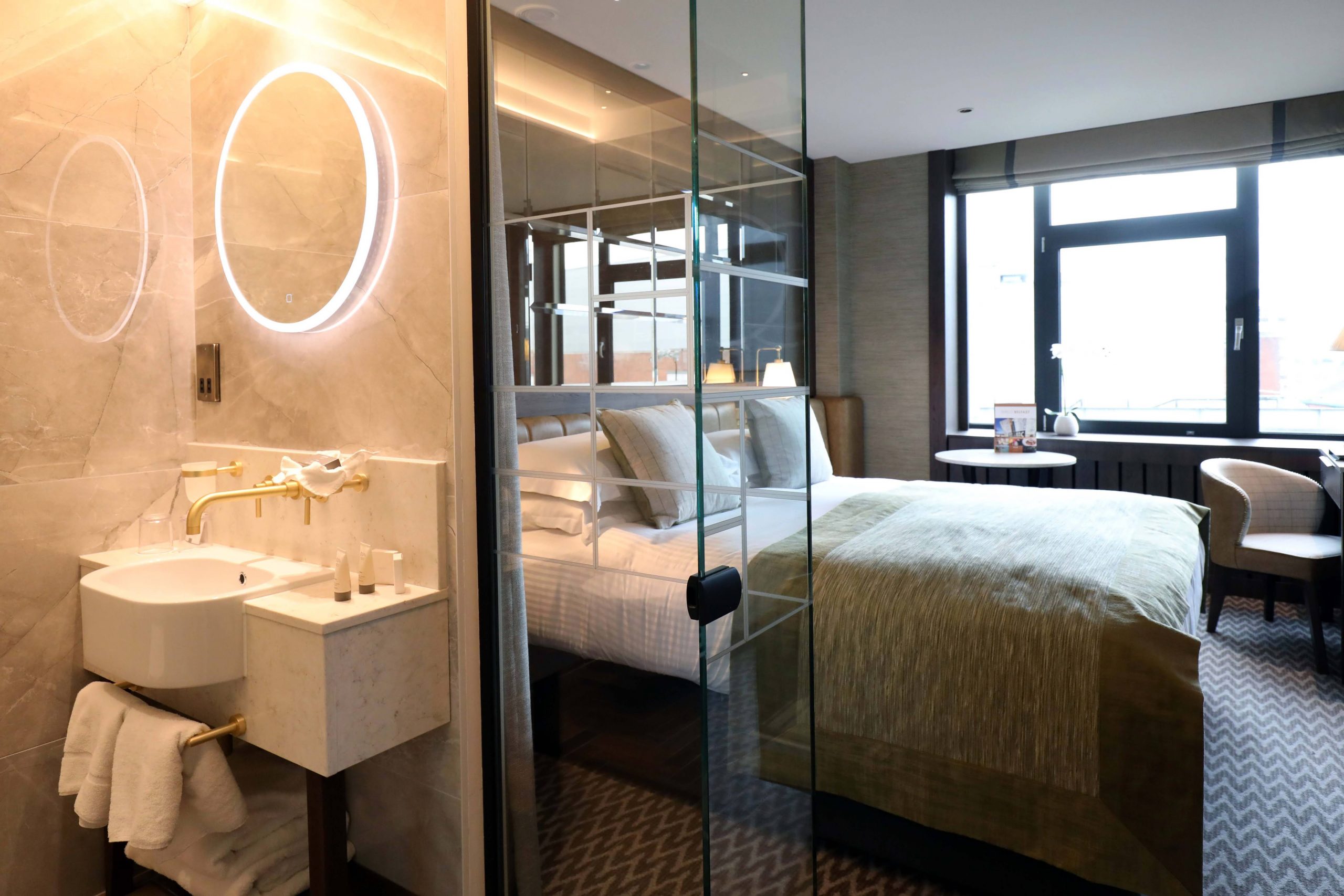 Classic Bedroom
Press Eye – Belfast, Northern Ireland – 7th October 2020
Photo by Darren Kidd / Presseye
Europa Hotel new guest bedrooms.
The programme, which started in September 2019 and will be completed by March 2022, will see the 100 front-facing Superior bedrooms, 80 Classic bedrooms and five Suites redesigned and upgraded.
Upon completion, all rooms will be individually air-conditioned, have automated window blinds, new bathrooms and refreshed interiors and Classic rooms will have a new King Cloud Bed with Super King Cloud Beds in the Superior rooms. 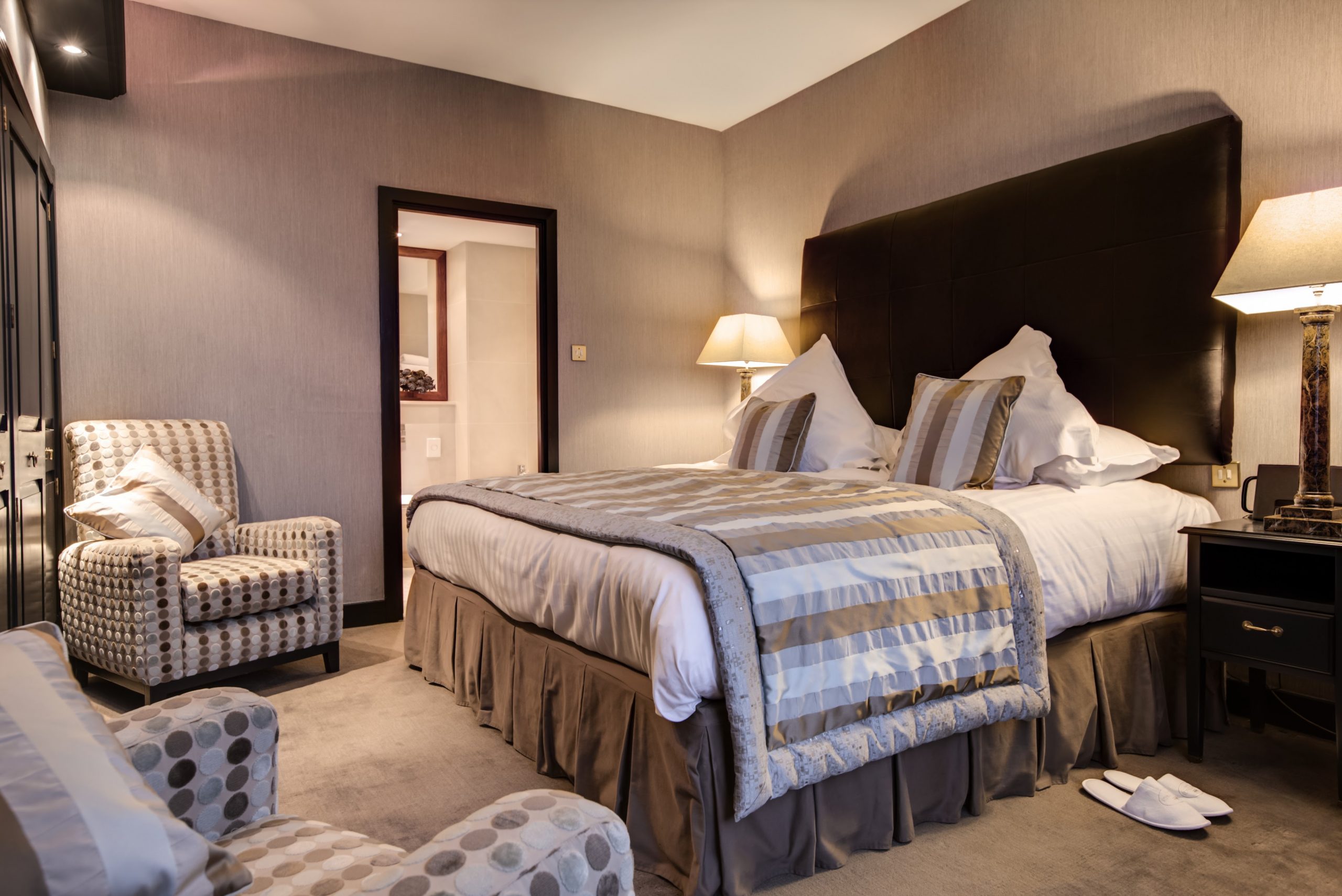