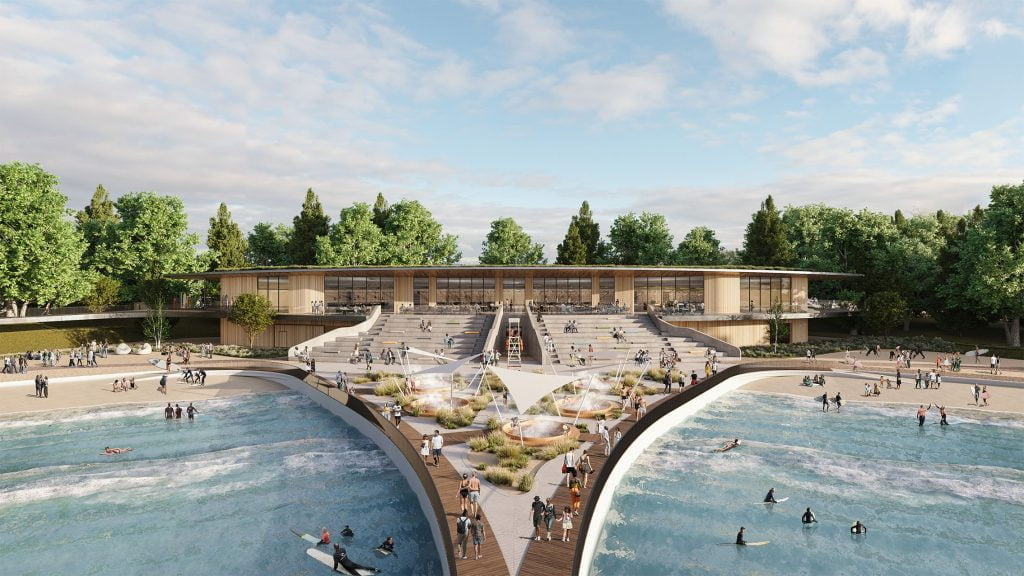 Hollaway Studio, the award-winning architecture practice which has studios in both London and Kent, has created the designs for the 15-acre site which will feature a Wavegarden Cove technology surf lagoon at its centre, which would be the second of its kind in England and the seventh of its kind in the world following facilities in Melbourne, South Korea, Switzerland, Brazil, Wales and Bristol. The revolutionary Wavegarden Cove technology featured in the lagoon, which can be used by up to 80 people at a time, offers up to 1000 perfect waves per hour similar to those in the ocean. It can create more than 20 different wave types ranging from 50 cm to 2m in height, providing rides of up to 15 seconds long for all ages and abilities. 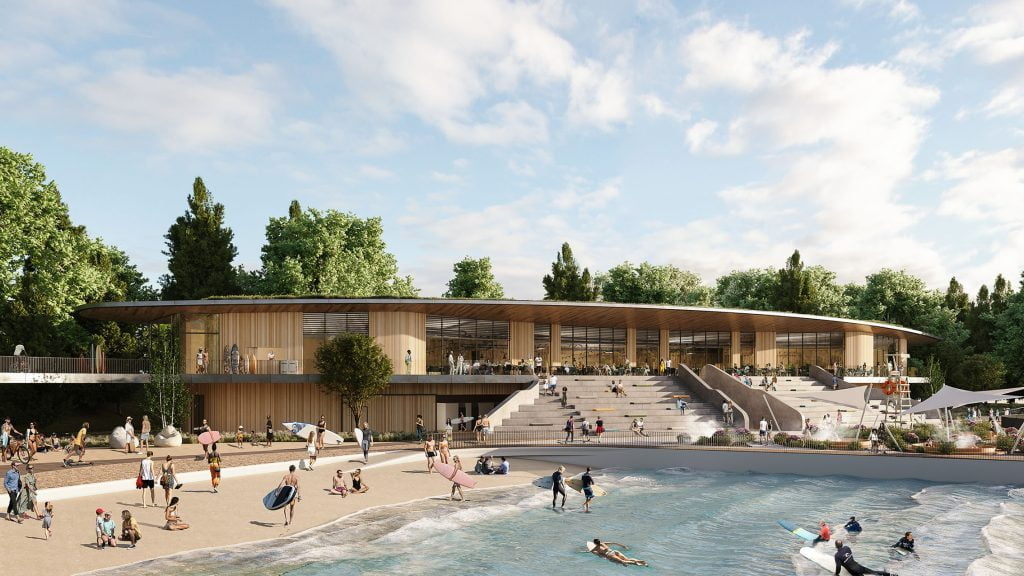 Overlooking the surfing lagoon is the ‘Lagoon Surf Hub’ with 15 accommodation lodges; a wellness centre with yoga and fitness zones, cold water therapy, meditation pavilions and a splash pool; a clubhouse with a surf academy as well as a restaurant and bar; conference facility; retail outlet; chill out spaces; dedicated work area; and immersive balcony. A dedicated learning hive will run a full-time schedule of courses for children via surf therapy and educational intervention programmes to enhance and protect their mental health. 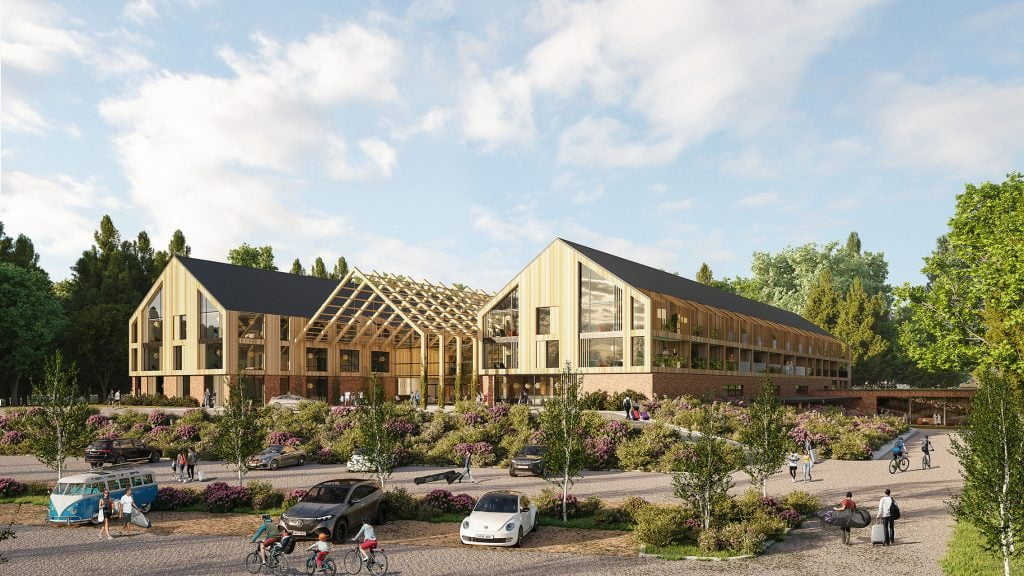 In addition to the hub, there is a separate design for the destination 120-bed hotel, spa and gym. The inclusion of the hotel will work to readdress the lack of hotel rooms available in the surrounding area and welcome visitors from outside of the area.

While Kent may have easy access to the sea, the inclusion of the surf lagoon at The Seahive is an exciting one as the local sea conditions are not suitable for surfing.

Jim Storey, chief executive and founder of The Seahive describes Kent as ‘one of the most surf-locked’ parts of the UK. “Kent is not renowned for its surfing at all, in fact, a lot of people who love surfing drive six hours to Cornwall or hop on a flight somewhere abroad and that’s not ideal when it comes to the use of fossil fuels. The sea is not a particularly welcoming environment for children or people who suffer from various mental and physical disabilities but this is a space designed for all abilities. It’s a safe space where people can push boundaries, make friendships, connect with their communities and experience personal growth.”

The Seahive project will occupy 15 acres of the popular 250-acre Betteshanger Country Park. To ensure there is no damage to the existing wildlife and plans there has been in-depth research into enhancing sustainability and biodiversity in the area. On completion of The Seahive, it is estimated that this will in fact be improved by 11% which will offset the initial loss of habitat.

Alex Kalorkoti, consultant to Betteshanger Country Park, says in response to this: “We have been aware of the valuable habitats and important species here from the outset and we have incorporated ecology into our plans. It’s not development first, and the environment as an afterthought. We’ve set aside 11 hectares of the country park which is furthest away from the hub activity and the car park. That land will become part of the ecological management plan. We are also funding an ecology warden because at the moment there are no people dedicated to ecology on the site. By doing this, the habitats are being managed in the long term, so we keep favourable conditions for lizard orchids, turtle doves and invertebrates.”

The Seahive project is part of the Betteshanger Country Park’s wider plans to expand, reflected by the recent additions in 2022 of a Mining Museum, café and restaurant as well as cycling tracks and play areas. 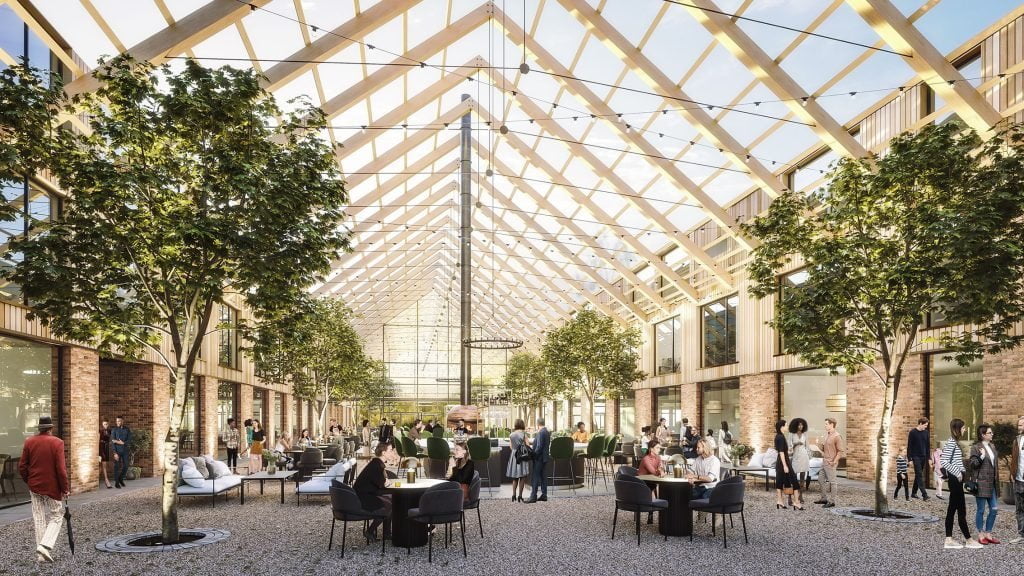 About Hollaway Studio
Hollaway Studio is an award-winning architecture and interiors practice that places people and feeling at the core of its philosophy of architecture. With offices in London and Kent and a strong reputation for design, the practice is working in a wide range of sectors including hospitality, hotels, restaurants, education and housing. Hollaway has designed the world’s first multi-storey skatepark – F51, located in Folkestone – which has been named one of the “10 coolest new buildings to gawp at this year” by the Times. In recent years it has worked on a number of large-scale regeneration schemes including the restoration of five listed buildings into a mixed-use site involving four TV & Film Studios, Post Production, educational facilities and residential. Recent projects include the award-winning Process Gallery for artist Nick Veasey; the first new-build Picture-house in the UK at Ashford for developers Stanhope; a new winery, gin works and brewery for Chapel Down; and a number of large regeneration and housing schemes in London including Bromley South Central for U&I, and the Fisheries in Hackney’s London Fields.