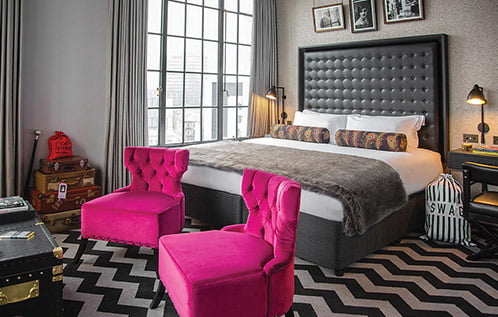 Hotel Gotham has been named the World’s Best New Hotel by the World Boutique Hotel Awards, giving it an unprecedented ninth award since its 2015 launch at the head of King Street in Central Manchester. Having also been named the Best New Boutique Hotel in Europe at the event, Hotel Gotham can toast a remarkable first full year of trading, with outstanding commercial performance and over 90 per cent average occupancy, five-star certification and Two Rosettes awarded by the AA, alongside glowing reviews from guests and media alike.

Following the property’s dramatic opening in April 2015, Hotel Gotham has secured recognition from a range of media outlets and awards ceremonies, including ‘Hotel of the Year’ at the Independent Hotel Show Awards, ‘Top New City Hotel’ in the Hoteliers’ 100 Awards, ‘Best Launch Campaign’ at Caterer.com’s People Awards, ‘Most Stylish Independent Hotel’ at the Hilden Style Awards, ‘Coolest Boutique Hotel’ at the Cool Venue Awards, as well as ‘Manchester’s Finest’, in addition to being named as part of the ‘International Hot List’ by Conde Nast Traveler.

“We are absolutely thrilled to continue to be recognised in this way,” said Hotel Gotham’s General Manager, Mario Ovsenjak. “The awards and acclaim the hotel has received since launch is entirely down to the hard work and dedication of our outstanding team, so it is fantastic to see them rewarded.”

“Hotel Gotham has exceeded all expectations since it launched a little over 18 months ago,” added Graham Marskell, Managing Director of Operations for Bespoke Hotels. “We have been thrilled both with the critical and public response, as well as the outstanding commercial performance and, of course, the efforts put in by every member of the staff.”