With two offices, one in London and the other in Zagreb, Atellior has good coverage of the European market, and has been working on an impressive number of projects in the UK and Croatia given the company’s size. Sophie Harper paid the London office a visit, in its ‘trendy warehouse’ setting in the side streets of London’s East End, to speak to Una Barac to find out how the team have garnered such success so early on.

A design studio in its relative infancy, Atellior has burst onto the scene with an air of quiet confidence. Headed up by Executive Director Una Barac and Managing Director Ante Marić, who between them have 30 years’ experience in the industry, it’s of little wonder that this chic, new(ish) design studio feels like an established name already. “Atellior was formed two-and-a-half-years ago. It’s been amazing – the best thing I’ve ever done. There hasn’t been a nanosecond where I’ve thought ‘what have I done?’ – I’ve never had such a clear vision or path and clarity in thinking this is the best thing ever! It’s been a buzz – a big long, two and-a-half-year buzz!” Having begun her career at Foster & Partners when she was still a student, Una was introduced to the world of architecture on a work experience placement. “I ended up spending seven years there, which was phenomenal; I think it’s the best sort of schooling you can have,” she says. “I saw them grow from around 250 to 650 people and it was great experience as back then you were actually working with the partners and getting direct interaction, which was wonderful.” 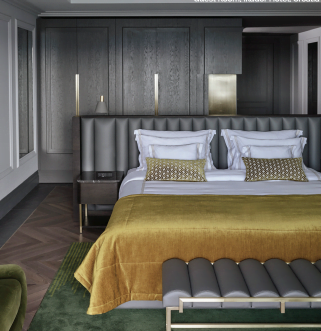 After seven years at the firm, Una decided to move to a smaller company to broaden her experience and develop her career, “I was at Scott Brownrigg for 14 years and ended up on the partnership board but eventually decided I wanted to run my own business and be master of my own destiny.” During her time at Scott Brownrigg, Una had pitched the idea of opening an office in Croatia and been given the go-ahead to spearhead the project. She flew out with a business plan approved by the board and found premises, staff, solicitors and accountants to help set up the business. “It made sense with my background…” (Una is originally from Croatia), “…to run the Croatia office, so it became my baby,” she says. It was prime experience for running an office abroad and for setting up a new business, so when it came to management buy-out it was agreed with the board that that was the part of the business Una would take with her. “It wasn’t like resigning from one job one day and then starting afresh somewhere different the next, or starting an entirely new venture, there were 23 of us continuing, doing what we had always been doing just under a different name.” The challenge then was to set up the London office. “I remember telling my business partner how I’d forgotten how hard it was the first time around,” Una says. “It’s a bit like childbirth, you forget all about it and then find yourself doing it all over again a few years later, but it was brilliant. There will always be hard days and challenges, but it’s been really good.”

In the space of two-and-a-half-years, Atellior has already grown from a 23 to a 33-people-strong team. “It’s been a good level of growth so far, a natural progression: we needed to grow the team as we continue to take on more projects and grow our clientele in London, but I didn’t want us to ‘explode’ too quickly,” she explains. “It’s important to monitor the quality of work and growing too quickly could have had an adverse effect on that. It takes time to train people, to invest in a team that understands the brand ethos while still being innovative and able to generate fresh ideas.” With a number of clients bringing repeat business their way, Una says she is mindful to be offering new ideas and solutions for each individual project, so it’s important to get the training right for new members of the team. “There’s no company style exactly, but there are company procedures. Obviously having come from a corporate background, we’re very structured and organised in the way we work and that enables us to serve our clients in the most efficient way possible, but I’d say it takes three to six months to really train somebody properly, and then we don’t want them to go, so it’s about carving out careers for anyone working for us – we want them in it for the long term – that way the benefits for them are greater, as well as for the company.” 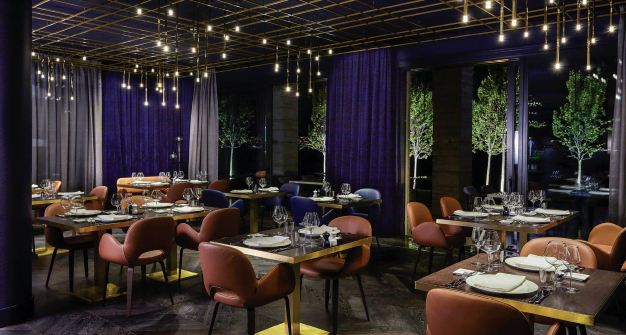 Una tells me about some of the training involved including getting everyone up to speed on AutoCAD etiquette, quality drawings, and near-perfect content. “The processes we have in place ensure the quality of our drawings so that we have highly and professionally put-together drawings for mechanical engineers and structural engineers to follow. It’s nice to design something but to have it delivered well, it needs to be put together technically – it’s the less glamorous side of what we do but it’s the most important.” We discuss the general running of the business and Una tells me how she has become involved in every aspect of the business, “You kind of have to be involved in everything, from IT problems to HR, to managing client relationships and be able to answer the phone to a contractor and know about every nut and bolt onsite – there are a lot of aspects to it, a lot of facets.” She adds, “I personally get most excited about the design work, presenting the design to the clients, developing designs with my team, but you’ve got to do the more serious stuff like the admin – you’ve got to be aware of what’s happening with the team at all times.” She tells me how important it is to plan ahead for the future, continually thinking about the next 12, 18, 24 months in advance. “Whilst there’s a lot of being ‘in the moment’ and enjoying that with the team or with the client, you can’t afford to take your eye off the ball, so you’re constantly thinking about what’s happening in the next year or more, making sure we are all still gainfully employed and thinking about new projects to work on.”

With over 20 projects being worked on by the team at any one time, both offices are a hive of activity, “The projects range from really large hotels through to smaller luxury apartments, but we have a really good team structure so we’ll have directors and associates and project runners all working on a project with a good overview and who can deal with any situation. One day we might be looking at a 400 square metre residential apartment and the next day a 30,000 square metre resort – but no project is more important than another.”

I ask Una what inspires her design ideas other than the locale or brief for a project and she tells me how she often thinks up a backstory, “I call it a crutch for us designers, if you do a bit of research it’s amazing how you can go off on a weird and wonderful journey and get lost in a story that you can unfold within the design. I find it really adds something different and unique to any project.” Whilst we talk about design inspiration and envisioning different concepts, it makes me wonder if Una has always had an eye for design and I ask her to tell me more about what first sparked her interest in the industry.

“My parents are civil engineers and I grew up watching them draw,” she says. “They’d buy me these massive packs of felt pens but I always wanted one of their technical pens – at the time they used to draw with gold-nibbed rotary pens, which were super expensive, and they used to tell me if I became an engineer or an architect when I grew up I could have my own set. That, to me, was such an enticing thought so that’s where it started.” Una explains how she’s always been more creative and less science-orientated, which is why she didn’t pursue engineering, “Architecture was really the calling for me. I remember going to a careers day at school and telling the advisor there that I was going to be an architect. I made her job very easy! It was always quite a clear vision for me.” 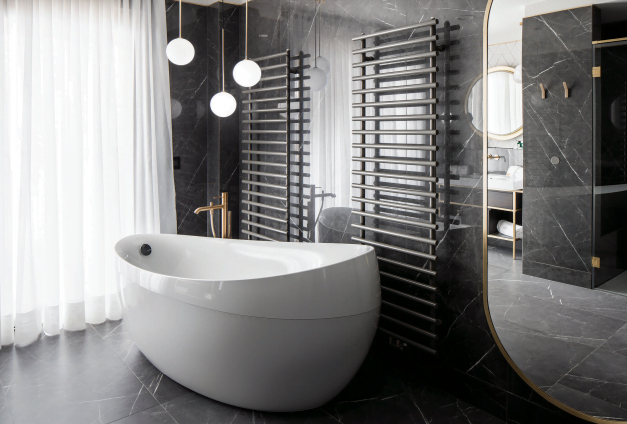 It was only when Una started working at Foster + Partners that she was encouraged to look at interiors. “My peers and mentors could see I had an eye for interior design, and then the same happened in my next job, so I started digressing from architecture to design and interior architecture. I’m immensely proud to be a registered architect, but ultimately interior design is where my strengths lie – interiors can be so dynamic and versatile and come together at a faster pace with quicker results than architecture. It takes a strong person to recognise their strengths and weaknesses,” she says, “and I’m quite happy to say I’m a better interior designer than I am an architect. I don’t want to be a Jack of all trades and master of none, that’s why we don’t do architecture [at Atellior], we’re a niche boutique studio that focusses on things we’re bloody brilliant at.”

And that, perhaps, is the underlying reason clients keep returning to the studio and developers and architects put Atellior forward for new projects; because they are a focused and driven team, able to deliver projects professionally as well as manage expectations. Una tells me her goal for the business is to be the go-to design studio for hospitality and residential interiors, “I think the brand will keep going from strength to strength as we grow.” She adds: “I don’t have any aspirations for world domination just yet, but I’d like the business to steadily grow.” And on that note, I can’t wait to see how the studio progresses. 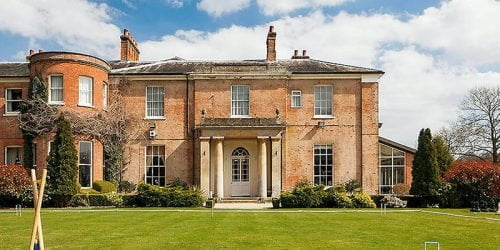 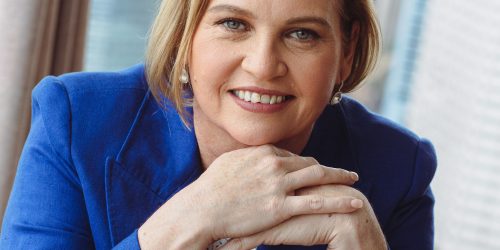 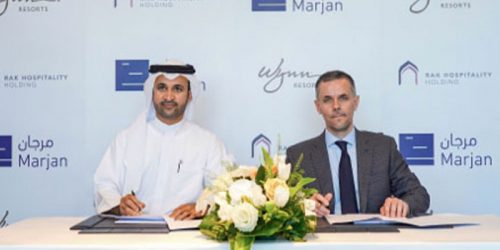