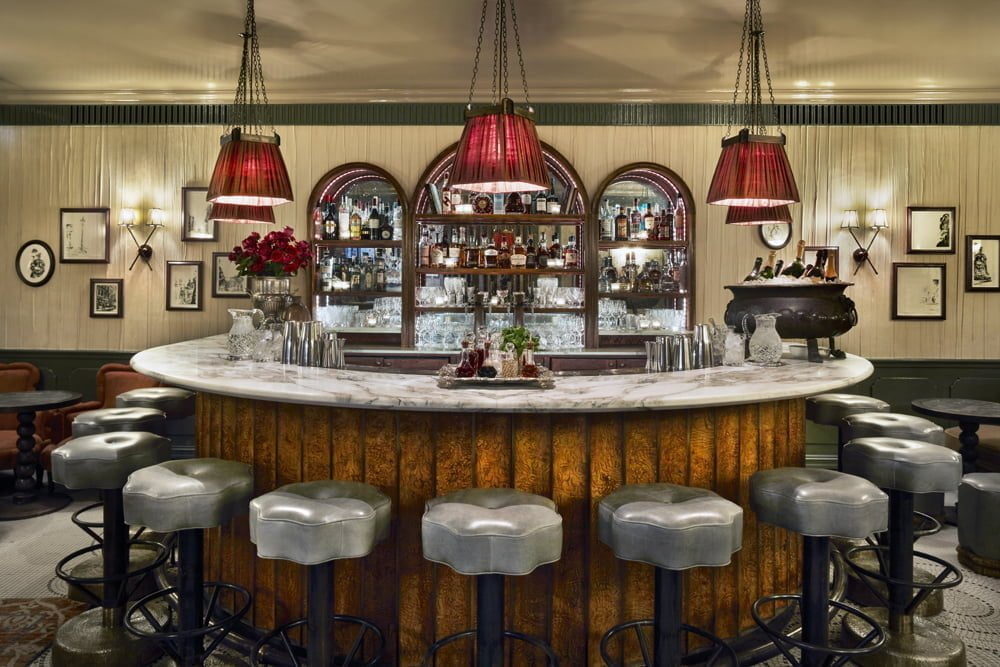 As a building steeped in history and famed for drawing well-known guests, the redesign of Kettner’s Townhouse was always going to be a delicate affair, but one with exquisite results. Features Editor Sophie Harper finds out more about the year-long refurbishment.

Nestled in the heart of London’s famously fun Soho district stands the proud row of four typically smart townhouses that make up the bricks and mortar of Kettner’s. Originally a restaurant opened in 1867 by Auguste Kettner, Napoleon III’s chef, Kettner’s had a reputation as the place to be if you were anyone of any substance, and as such attracted a whole host of famous names. In fact, frequent visitors to step through those glossy framed doors included King Edward VII and his mistress Lillie Langtry, Bing Crosby, Winston Churchill, Agatha Christie, and Oscar Wilde – who was famously arrested quite regularly during his three-year occupancy there.

Today, Kettner’s retains its lure, albeit in a more sensible manner, perhaps, but its appeal comes more from its exquisite French-inspired drinking and dining offerings with a pinch of quintessential Britishness felt in its interior reimagining, which was unveiled at the beginning of the year.

The refurbishment of the Grade II listed building began in 2016, following the takeover of the lease from Gondola Holdings, along with several other Georgian townhouses, by the restaurant and hotel operator Soho House. The works were completed at the end of 2017 and Kettner’s new look was revealed to the public in January this year with the addition of ‘Townhouse’ to its former title.

From the outside, Kettner’s is a smart and sophisticated building that doesn’t feel the need to shout at onlookers to admire it. Instead, it stands quietly, allowing its guests to feel as though they’ve discovered something rare and mysterious, and rewards visitors with a bounty of beautiful prints, fabrics, and flooring once they’re safely through the doors. Soho House has, it seems, worked its magic and used its knowledge of private members clubs to give Kettner’s an exclusive feel all of its own.

Much of the ground floor of the building, including the staircase, is listed (as is the Jacobean suite on the first floor), which was a challenge for the in-house design team. The brief for the refurbishment was to achieve a feel of ‘accessible glamour’, which was to incorporate typical Soho House traits and comfort whilst retaining the building’s historic features. The public spaces, namely the dining room, piano bar, and champagne bar, are all quite different to each other for guests to distinguish easily between each area.

Kettner’s holds a lot of history in Soho in one form or other, and it was important during the design process to preserve the ground floor’s champagne bar and restaurant. The original 1920s mosaic tiled floor, heritage mirrors, and art deco flourishes have been kept in the champagne bar with the addition of hand-printed curtains, suede wallpaper, and handcrafted furniture, all of which complement the original features in an easy and pleasing manner. Taking centre stage is a statement bar consisting of a walnut base and marble counter as the room’s star attraction, beautifully framed by original artworks inspired by the murals discovered on the building’s walls during the refurbishment.

The design team were very much looking for French-Anglo styling in the dining room, with the original Kettner’s being one of the first in London to serve French food and current Head Chef Winston Matthews designing the menu around Auguste Kettner’s Book of the Table, which features plenty of traditional French dishes. The refurbishment here has done a lot to warm up the previously cool white and grey tones, which have now been replaced with rosewood and mahogany furniture, soft-toned table linen, and daintier lighting for a better ambience and elegant bistro feel. Given its Grade II listed status, the floral plasterwork remains intact, with the addition of Victorian-inspired botanic prints and pink marble detailing peppered throughout the restaurant to further enhance the original features.

Adjacent to the restaurant is the hotel’s famous piano bar, a seemingly laidback area where comfort appears to be the overriding feature. The colour scheme that runs throughout the rest of the ground floor works to great effect here with a warm and inviting theme. It’s quite the setting to sit back and enjoy a ‘High and Wilde’ – a twist on the classic champagne cocktail with a sugar cube soaked in absinthe (Oscar Wilde’s favourite tipple), topped with peach purée and prosecco.

Climb the building’s original 18th-century spiral staircase to the upper floors and you’ll find seven private rooms, which include the two showcase spaces: The Apartment and The Salle De Fête. The Apartment has a members club feel with a secret entrance on Greek Street. The space draws inspiration from a French film director’s lair, with wooden panelled walls, comfy ‘casting’ couches, a bespoke drinks cabinet and a grand piano available to hire. The Salle De Fête has an elegant, light and airy penthouse feel and comprises three open spaces; The Salle, The Attic Bar and The Den.

Across the upper floors are 33 individually designed bedrooms, each conveying a luxurious French boudoir air with a nod to the 1920s. Ranging in size, each room features Georgian timber floorboards, original fireplaces, and vintage items from antique sinks and vanity units to delicate chandeliers. Much of the bedroom furniture was made especially for the hotel, with plump and inviting deep-button armchairs and scalloped, hand-finished velvet headboards adding to the indulgent feel of the rooms. Coupled with Georgian-inspired wallpaper, unique works of art and, in some rooms, a freestanding copper bathtub, guests might feel as though they have stepped into a more genteel era, although the bathrooms themselves do feature more modern rainforest showers and a range of fragrant Cowshed products. The pièce de résistance is undoubtedly the Jacobean Suite, which comes with its own living and dining area set over 80 square metres and is adorned with original Edwardian wood panelling and ceiling detail, and weighty tapestry curtains. The large emperor bed and private entrance give it that extra je ne sais quoi.

The overall presentation of the refurbished Kettner’s Townhouse has been handled delicately, with the design team working with English Heritage to not only preserve original features, but to enhance them with design that honours and complements different periods throughout the building’s unique history. And that in itself is an art form worth celebrating.