In celebration of its first anniversary this August, Mondrian Shoreditch, in the heart of London’s creative and cultural hub, has collaborated with fashion designer-come-artist, Jack Irving, to unveil a striking inflatable sculpture on the facade of the hotel.

For this milestone anniversary, Irving has designed an abstract inflatable rocket, Futura, measuring 12m wide x 8m high, in a bronze mirror nylon finish which covers the entire front facade of the hotel. Conceptualised to “blast Mondrian into the future”, the piece empowers the positive drive towards reaching higher ambitions and the futuristic bronze form shows Irving’s own artistic impression of a space rocket blasting off.

Commenting on the partnership, Jack Irving said “I wanted to create a sculpture that represents the future of Mondrian, that both draws people in and celebrates the playfulness of the brand. I’m really proud of Futura and the message that it signifies.”

David Lockhart, Mondrian Shoreditch General Manager said, “We’re so excited to be working with Jack on this collaboration. We knew we wanted to unveil something out-of-the-ordinary and special for our first anniversary. For us, the birthday rocket sculpture encapsulates all that we have achieved in the last year after opening in the midst of the pandemic, and demonstrates our positive attitude for the future. We endeavour to work with local talent where we can, and are so pleased that Jack has been the one to bring our vision to life so brilliantly.”

The rocket was officially installed on 31st August, and is located on the hotel’s canopy rooftop on Curtain Road, where it will stay for two months across London Fashion Week and London DesignFestival. Hotel guests, diners and East London locals are encouraged to take part in the celebrations using the hashtag #MondrianBirthdayBlast.

Those who use the dedicated hashtag to share on social media, will be entered into a prize draw to win a full-experience Mondrian overnight stay. One lucky winner will receive an overnight stay in Mondrian’s Penthouse Suite, with breakfast at Laurel’s on the Roof, a welcome cocktail at Christina’s and dinner at BiBo for two. 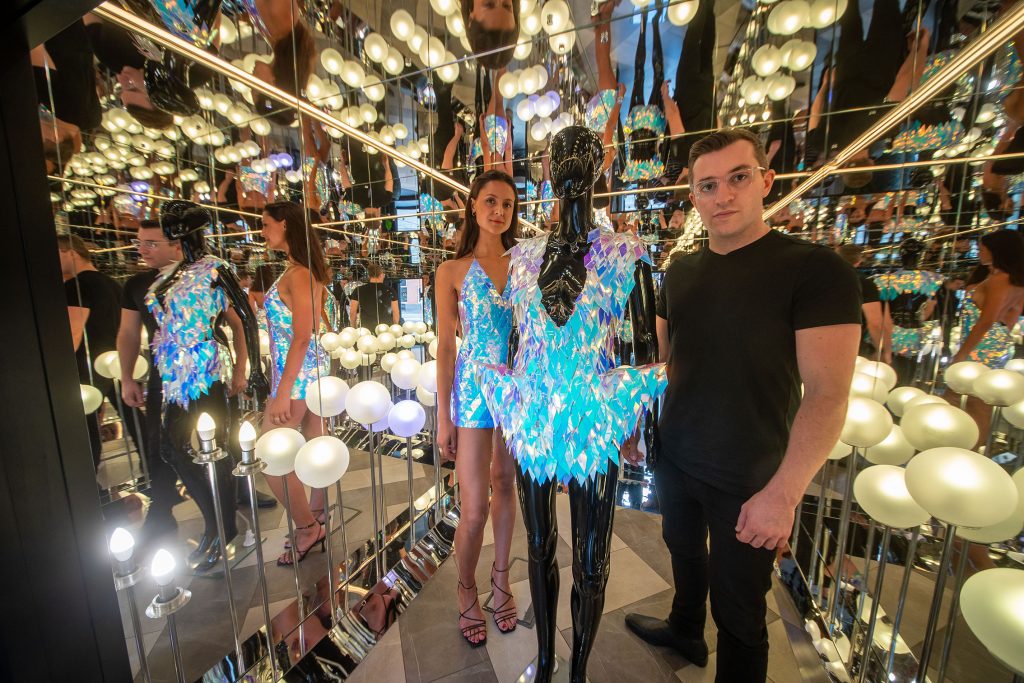 Jack Irving with Lady Gaga dress and model in Paris Hilton dress in the lobby at Mondrian Shoreditch. © Jeff Moore

Irving is perhaps best known for his work with Lady Gaga, who is a longstanding fan and has worn many of his pieces – the most famous of which is the Sea Urchin Showgirl inflatable dress, not to mention the three outfits featured in her acclaimed Netflix documentary. Inside the hotel will be two pieces from Jack’s archive which have also been worn by Lady Gaga and Paris Hilton. The two holographic dresses will be displayed in the lobby’s Infinity Room for guests to view, and the Curtain Club for members.

This October will also mark the first anniversary of refreshed members’ club, The Curtain Club. Representing a collective of forward-thinking, diverse and driven individuals, The Curtain Club offers a relaxed co-working space, wellness & fitness and unique social spaces that blurs the lines between work and fun, and business and culture. Its curated calendar of events span music, wellness, art, film and fashion.

As a leading lifestyle brand, Mondrian recognises the cultural vibrancy of a place and elevates it – intertwining guest offerings with local highlights, bringing the essence of East London to the hoteland vice versa. Since its opening a year ago, Mondrian Shoreditch has sought to collaborate with local personalities and artistic pop ups, and will continue to do so into the future.

Mondrian Shoreditch is also pleased to announce its partnership with Hotel School, a charity that supports vulnerable and homeless people into the hospitality industry. Mondrian will work with HotelSchool to provide taster days, training courses and employment opportunities, teaching the skills needed to work in the industry. Graduates who complete the training course are then carefully matched into partnership businesses with a dedicated mentor.

Social Media Competition
Subject to terms and conditions: Subject to availability. To be redeemed until the 30th of April 2023. Any additional services or consumption will be charged. Prize is not transferable. Dinner at BiBo for two is to the value of £150.

About Mondrian Hotels & Residences
Mondrian is more than a hotel: it’s a way of travel. Known for its groundbreaking design and progressive programming it is a “must” destination for locals or travellers. Mondrian is always at the heart of the most exciting cultural scenes in the world, serving up innovation and creativity for everyone. Mondrian provides a playful framework so that guests and locals alike can immerse themselves in the culture of each city it inhabits. Design is at the centre of the Mondrian experience with hotels designed by some of the world’s most famous architects and designers, including Philippe Starck and Marcel Wanders. With six properties in Los Angeles, Miami, New York, London, Doha and Seoul, the brand is on track to more than double its footprint by 2023, with upcoming openings in Bordeaux, Cannes, Singapore, Mexico City, Australia’s Gold Coast and more. MondrianHotels.com.

Mondrian Hotels & Residences is part of Ennismore, a creative hospitality company rooted in culture and community, with a global collective of entrepreneurial and founder-built brands with purpose at their heart. Formed in 2021, Ennismore is a joint venture with Accor, which holds a majority shareholding. ennismore.com

About Jack Irving
Jack Irving is a multidisciplinary artist and designer, originally from Blackpool, who now runs his own design studio in Stoke Newington, London. His futuristic vision fuses the worlds of fantasy and experimental design.  He is heavily inspired by deep sea life and nature, often experimenting with the concept of shape, silhouette and transformation.

Irving creates collections of wearable art: his own cosmic worlds of his hyper-reality. Over recent years he has expanded his designs away from the body and into immersive installation experiences.

Irving has showcased a live installation of his inflatable wearable sculptures at the V&A museum London, in addition to showcasing his last four collections of wearable art at London Fashion Week, most recently in February 2022.  His work has been featured in British and American Vogue, Dazed, Wonderland, Elle, New York Times and Daily Mail, to name a few, and also featured on ‘The Ellen Show’ in the US.  Lady Gaga recently featured her collaboration with Irving in American Vogue as one of her top 20 most iconic looks of all time.

Irving has designed and created costumes for the Doja Cat VMA performance, Paris Hilton, Cheryl Cole, and worked on costumes for Spice Girls – Spiceworld Tour, as well as having his own episode on Heidi Klum’s Germany’s Next Top Model, featuring his wearable art.

He won four major awards at the World of Wearable Art Awards in New Zealand, including the Cirque Du Soleil artisan award for innovation in costume design. Irving will be launching his first big public art installation in October 2022 as part of the iconic Blackpool Illuminations.