In celebration of its first anniversary, Mondrian Shoreditch has collaborated with British fashion designer-come-artist, Jack Irving, to unveil a striking and giant inflatable sculpture on the facade of the hotel

Hotel guests and London locals are encouraged to take part in the celebrations, snapping themselves with the rocket and using the hashtag #MondrianBirthdayBlast, to be entered into a prize draw to win a one-off complimentary Mondrian experience. 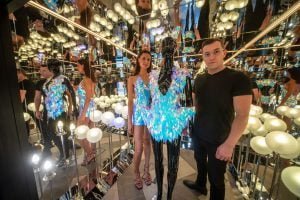