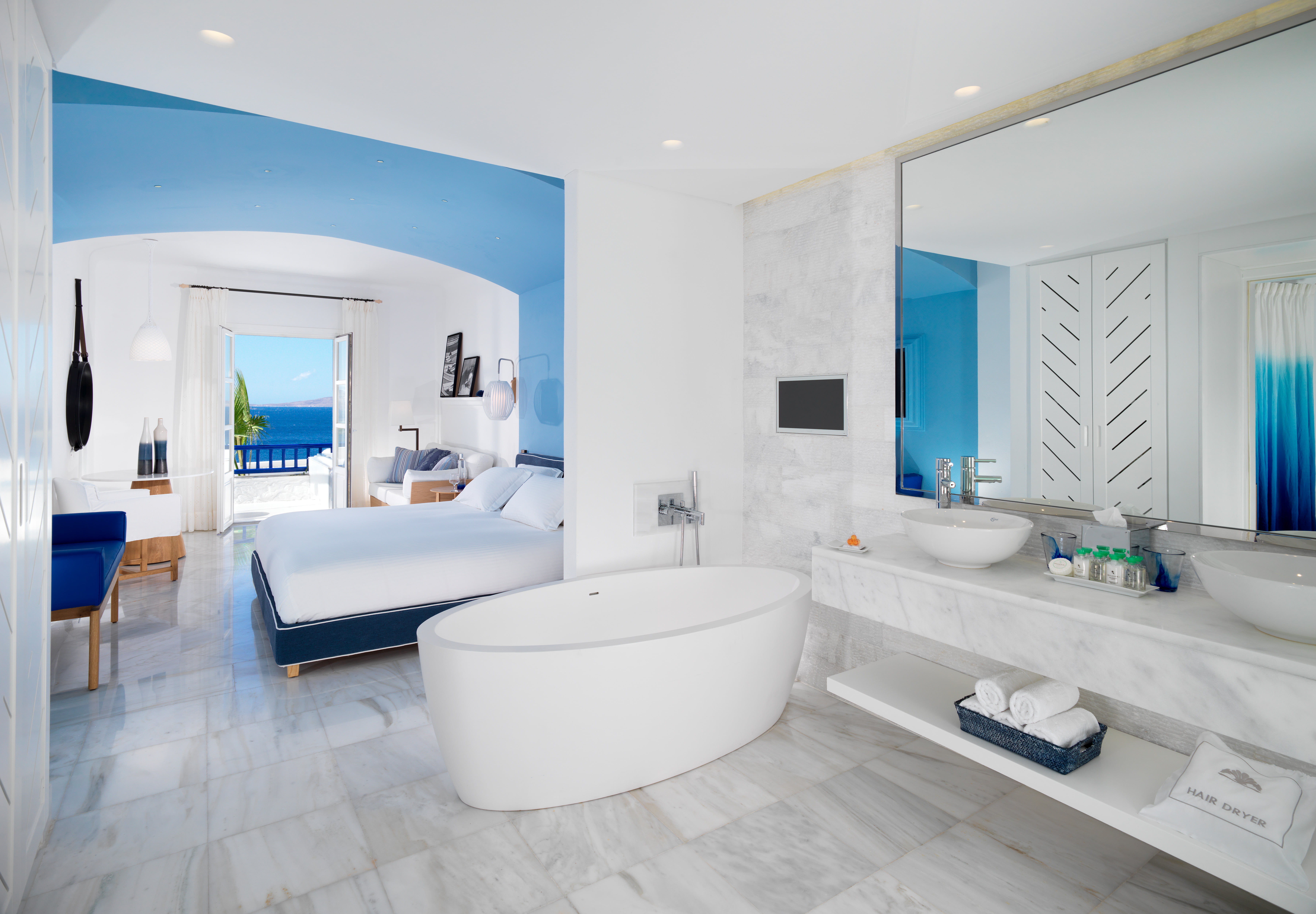 The Mykonos Grand, located on the picturesque Greek island of Mykonos, has reopened following an extensive renovation. The design team at MKV Design, who originally worked on the project in 2000, have completed work on all guestrooms and the library with the aim to gently update and enhance the hotel’s interiors.

The sequence of MKV’s designs at the Mykonos Grand is also the story of the changing tastes in 21st Century luxury design from the vogue for minimalism around the millennium to the return of light-touch decoration and, now, a preference for simple, authentic palettes. Throughout however, MKV Design – a practice which instinctively designs to elevate the indoor / outdoor relationship for hotel guests – drew on location as well as luxury of simplicity. The distinctive allure of the Mykonos Grand has always been, and remains, that it is a ‘secret’ gem that completely belongs in its landscape. Now in the latest refurbishment, this point is further made. Only the iconic colours of Mykonian architecture, white and blue, are allowed to prevail in the guestrooms.

All the guest bathrooms have been upgraded with white Greek marble throughout – continued on the floor of the bedroom area. A contemporary, free-standing Corian tub is located so that guests can either bathe with a view out to their terrace and beyond or watch the bathroom TV. The classical Mykonian arch which frames the bedroom space of the larger rooms is boldly emphasised in blue with inset ceiling lights like tiny stars; the sheers which previously draped the beds have gone to be replaced by crisp blue and white beds. Furniture and new decorative lighting is elegant and streamlined, recalling mid-twentieth century styling.

The refurbished library is light and joyful in tone with its white marble floor and simple painted walls juxtaposed with the strong accent colours of cushions, books, artwork and accessories. To one end, a collection of custom-designed pendant lights are arranged like clusters of orbs against a feature wall. Warmly toned timber adds further pace to the design while two oversized pouffes, upholstered in felt to resemble giant natural boulders, add fun; a floor mosaic in a design inspired by the mosaics of the neighbouring island of Dilos heralds the heart of the room. This is a very comfortable space for socialising, reading and, for those who must, even a spot of working.

“It is always very pleasing to be invited back to a project after several years so that we can freshen it up and meaningfully move the design on,” says Maria Katsarou-Vafiadis, Founder and Managing Director of MKV Design. “This time round, we have given the Mykonos Grand an even greater sense of place and introduced some touches that add further to the luxury experience.”