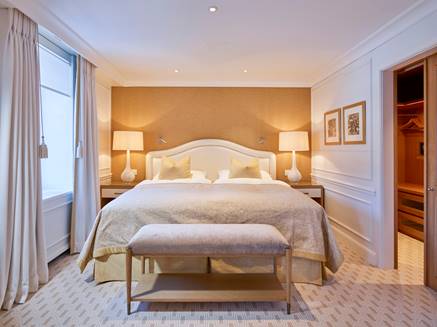 For the winter 2020/21 season (starting 10 December), Grand Hotel Kronenhof in Pontresina will unveil 15 newly-renovated rooms and suites by the award-winning French interior designer Pierre-Yves Rochon, who has also worked on the Four Seasons George V in Paris, the Waldorf Astoria Beverly Hills, The Savoy in London and sister property Kulm Hotel St. Moritz. Up to four rooms can be linked making these new rooms ideal for families and multi-generational travel.

All of the rooms are in the historic part of the hotel, which dates to the late 19th century, but all have a contemporary feel incorporating calming colours that reflect the local landscape. So, for example, one colourway uses beige and terracotta tones that echo the paints used on traditional Engadine houses, while another incorporates varying shades of blue inspired by the colours of the sunny skies and lakes for which this part of Switzerland is known.

When creating his designs, Mr Rochon is always mindful of the history of the building and its location, as well as the natural characteristics. As a result, many of the materials also reflect the region: the grey granite used around the wash basins and bath-tubs is from Bergell (less than an hour by car from the hotel), a patterned cork wallpaper used in the walk-in wardrobes mimics the sgraffito decorations found on historic Engadine houses and lightly waxed spruce highlights in the living areas connect to the local coniferous forests.

The rooms on the first floor of the hotel have oak wood floors, as the original floors (found in many of the hotel’s public spaces) are made of oak parquet, but room on higher floors have been carpeted to reduce noise impact. Black & white photographs of the area, as well as pictures featuring Alpine motifs (specifically produced for Grand Hotel Kronenhof), hang on the walls.

The end result is newly-created rooms that provide the perfect synergy between grand hotel style and modern Alpine living, somewhere that regional traditions and international expectations combine to create tranquil, luxurious and light interiors where every comfort is met and guests can completely relax.

Pierre-Yves Rochon of the renovation project said, “With every new project, I look at the existing architecture, the environmental characteristics, the local people’s way of life and typical construction materials. I respect the village’s history and its traditions. And then I hope to create something that will amaze the hotel guests that choose and love this property and make them like it even more. The design has to be committed to the needs of the guests and should not reflect the ego of an interior architect.

“And, of course, there are details that make a stay in the room more pleasant. A practical entry area, comfortable bathrooms with separate showers and toilets behind glass doors, a generous dressing space, the light, the view…  The new hotel rooms of the Grand Hotel Kronenhof are designed like apartments or studios”.