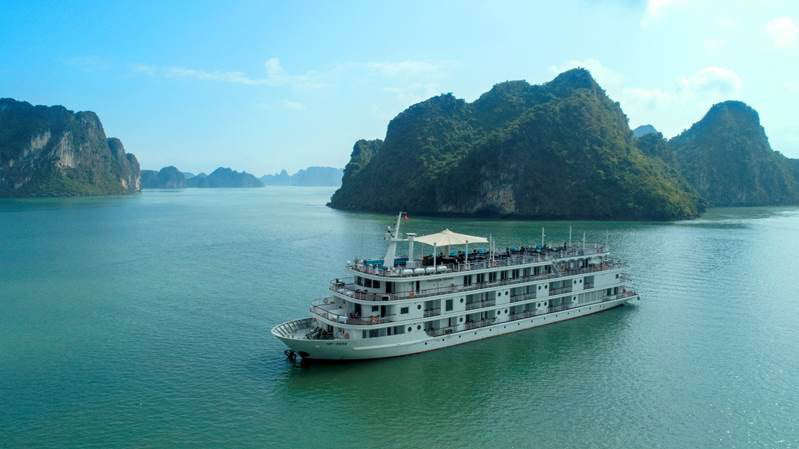 One of Vietnam’s leading providers of luxury hospitality services recently sailed into uncharted waters with the launch of its inaugural cruise in Lan Ha Bay, situated just south of famed Halong Bay.

The five-deck steel craft measures 70 metres long and 13.5 metres across the beam, caters for up to 80 passengers and houses 39 spacious cabins with separate walk-in closets, ensuite bathrooms and private balconies affording vistas of the bay.

Highlights on the new cruise’s one-night and two-night itineraries include kayaking in Lan Ha Bay, and trekking and cycling in Cat Ba National Park on Cat Ba Island, as well as a cooking class, Vietnamese wine tasting and sunrise tai chi and yoga onboard.

Passengers check-in at Paradise Vietnam’s exclusive lounge on Tuan Chau Island before departing for Cat Ba Island on the region’s first high-speed ferry, Paradise Express. With 198 airline-style seats and six round trips daily, Paradise Express cuts the ferry between the islands from 45 minutes to 15 minutes.

Since putting its first boat on the water in 2008, Paradise Vietnam has made a name for itself as the premier luxury cruise operator on Halong Bay. Paradise Vietnam also owns and manages Halong Bay’s first boutique hotels, Paradise Suites Hotel and Paradise Trend Hotel, and a burgeoning portfolio of restaurants situated in Hanoi, Halong Bay, Danang, Hoi An, Nha Trang and Ho Chi Minh City.