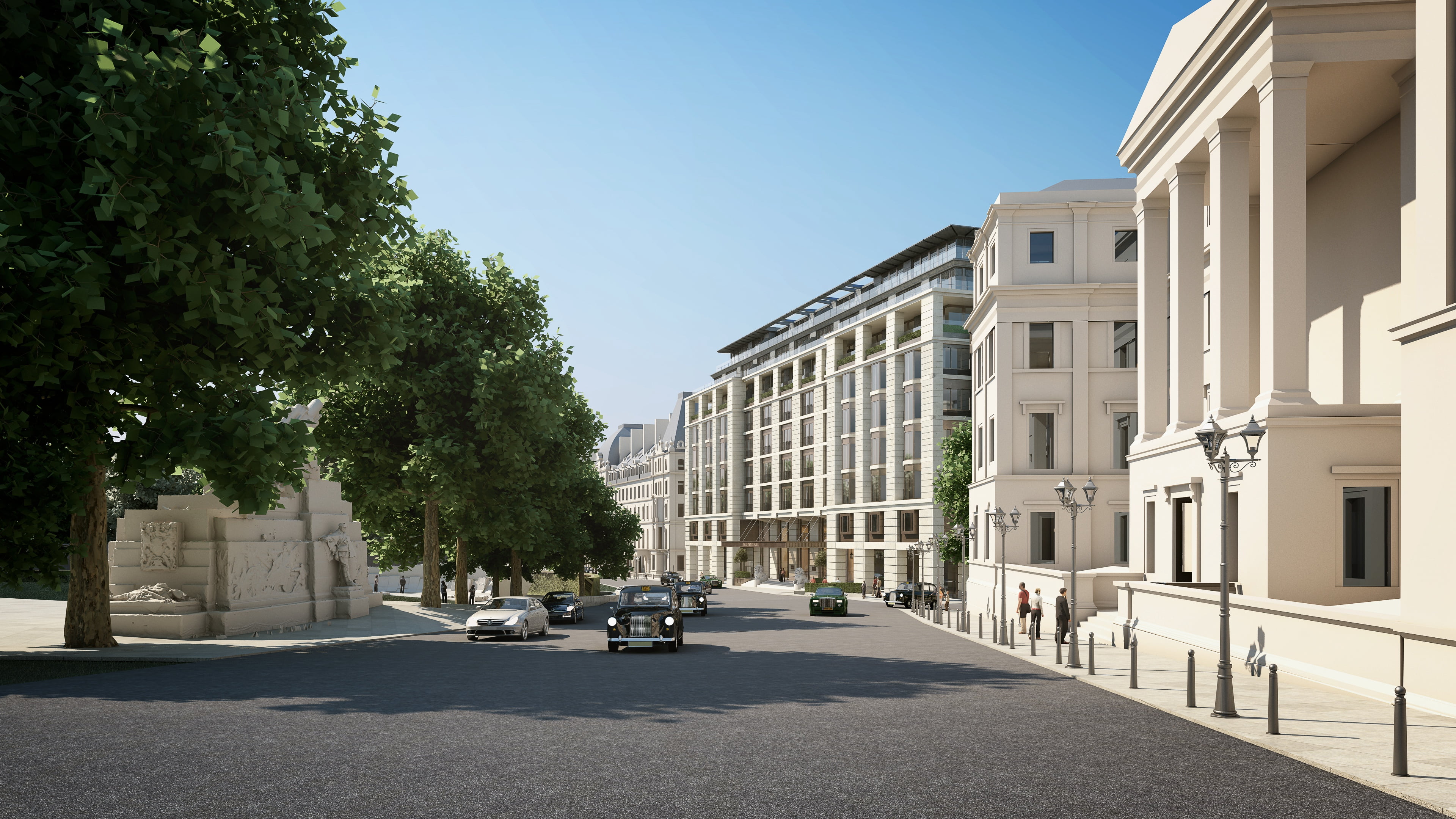 Joint venture developers Grosvenor Britain & Ireland (Grosvenor) and The Hongkong and Shanghai Hotels, Limited (HSH) are pleased to announce that Westminster City Council’s planning committee has resolved to grant planning consent for a new 190-room hotel, to be known as The Peninsula London, at 1-5 Grosvenor Place, Hyde Park Corner, Belgravia in central London.

The partners submitted an application in July to replace the existing 1950s and 1960s offices with a high-quality hotel and residential apartments designed by British-based Hopkins Architects.

The Peninsula London aims to bring a new level of distinction to London’s luxury hospitality scene and will cater for both hotel guests and local customers. In addition to guestrooms and spa, it will include shops, bars, restaurants and a ballroom. The design is inspired by the area’s heritage, befitting one of London’s most celebrated addresses. A grand pedestrian entrance on Grosvenor Place will be accessed from a colonnade linking to an internal ‘Palazzo-style’ courtyard, approximately 30 x 30 metres in size. Vehicle access to the hotel will be via this courtyard off Grosvenor Crescent. Plans also include 24-28 residential apartments with their own leisure and spa facility and separate entrance on Halkin Street. Separately, 23 intermediate affordable homes will be built nearby in Buckingham Palace Road, adding to housing supply and diversity of the area.

Grosvenor and HSH aim to start construction in summer 2017, with completion due in 2021. Research by Volterra suggests the scheme will support over 2,000 jobs and deliver up to £60m to the London economy annually.

Peter Vernon, Chief Executive Officer at Grosvenor Britain & Ireland said: “This is an excellent opportunity to shape a very special part of London. The Peninsula London is an example of the long-term thinking and high-quality design required to maintain London’s status as a global city. The scheme will support thousands of jobs and brings tens of millions of pounds to the West End economy. The Peninsula London also provides a chance to improve the surrounding realm by widening pavements, planting more trees and providing easier road crossings. It is a major milestone in our efforts to improve Belgravia as a place to visit, live and work.”

Clement Kwok, Managing Director and Chief Executive Officer of The Hongkong and Shanghai Hotels, Limited said: “We are delighted that Westminster City Council’s planning committee has resolved to grant planning consent for the development of The Peninsula London. London is one of the world’s most dynamic capital cities and we are excited to move another step closer to introducing The Peninsula brand to London together with our partner, Grosvenor. This hotel has been designed to align with our group’s philosophy of developing a small number of the world’s best hotels in exceptional locations, while respecting the history and heritage of the local area. We are very optimistic for the long-term future of London as a business and tourism destination. ”