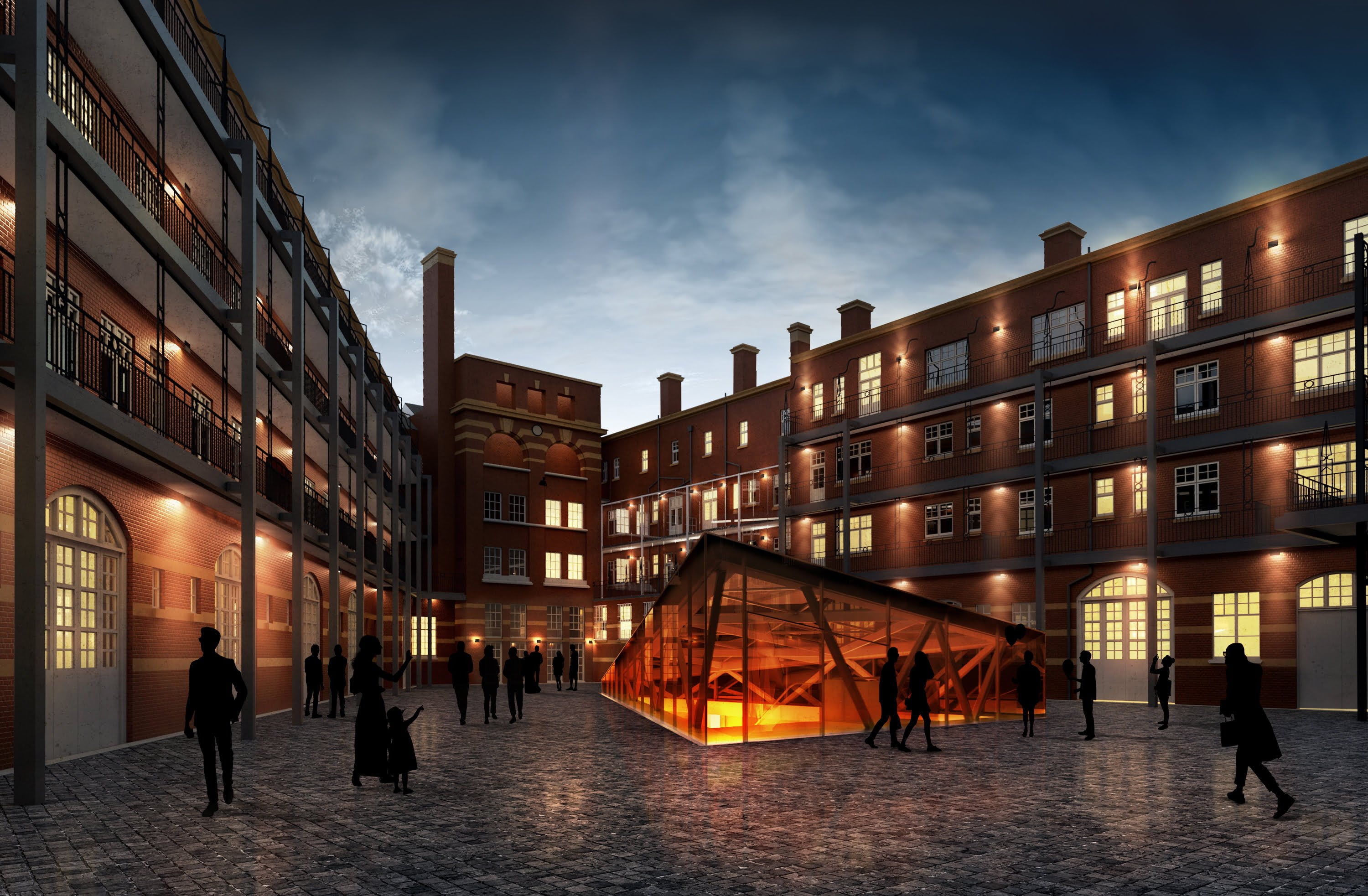 Allied London and Levitt Bernstein have submitted design proposals to reinvigorate two of Manchester’s best-loved buildings – London Road Fire Station and the Old Granada Studios at St. John’s. Both are iconic redevelopments for Manchester spaces that have been largely dormant for years, with plans carefully designed to reinvigorate the buildings themselves, the surrounding neighbourhood and contribute to the city of Manchester.

The Grade II* listed Edwardian Baroque style London Road Fire Station, which had fallen into disrepair when Allied London purchased the building in 2015, will be sensitively refurbished and expanded to house a boutique hotel, bars, restaurants, workspace and apartments.

Throughout, wherever possible the historic building fabric will be protected and preserved, in order to celebrate and preserve its unique character. A new hotel wing will also sit in front of the existing London Road courtyard elevation, with the original façade becoming one side of a corridor connecting the two. This extension is conceived as a metal tableau, designed to reference the site’s heritage and create a harmonious composition within the courtyard.

In the Fairfield Street wing, the old firemen’s flats will be sensitively adapted to create a series of workspaces and apartments – each of which will be truly unique in response to the building’s layout and retaining many original interior details. Elsewhere within the building, a spa and themed bars and restaurants will also be provided.

A new pavilion in the central courtyard will provide access to a further bar and event space. Its glass prism structure creates a stunning entrance with a grand sweeping stair descending into the subterranean space. Clad in semi-reflective glass, during the day it will reflect the surrounding architecture and blend into the background, whilst at night, it will be illuminated from within and draw people into the courtyard.

Popular tours by qualified Manchester Tour Guide, Jonathan Schofield, which have opened the building up to thousands of people for nearly a year, will complete with four days of tours between 01st – 04th June. These tours have allowed the public to experience London Road Fire Station and learn about its rich history. Visit Jonathan’s website for ticket information, available from 5pm today.

On the other side of the city, the Old Granada Studios will be reimagined into new mixed-use development at the gateway to the emerging Enterprise City at the St. John’s neighbourhood. OGS Works, the studios and flexible collaboration spaces, will be at the heart of the ECUK vision, which launched last month with a one day creative industries festival.

The iconic former Granada House, designed by Ralph Tubbs in 1962, will be converted into a 210-room hotel with restaurant and bar areas on the ground floor and rooftop. A new ‘glowing box’ structure will house the new restaurant atop the building, constructed on a network of fine columns to create a sense that it is floating above the hotel. Many of the existing studios are being retained to provide studios and flexible event space that will cater for a diverse range of performances and artists.

A new building adjacent will provide 22 new homes, workspace and retail units. The homes, a mixture of duplex and penthouse apartments, all have generous winter gardens or balconies as well as access to a private rooftop swimming pool and sun terrace. The commercial space here is complemented by modular units to the rear of the site, which offer further workspace for small, start-up companies.

Historically the Old Granada Studios buildings have expanded in an organic manner, with each addition functional and pragmatic in its aesthetic and clearly readable on the façade. The intention is to follow this approach and allow the new buildings to read as such and express their own architectural identity.

Following the high profile launch of Enterprise City UK at St. John’s on April 26th, Allied London will announce the beginning of regular ECUK events, the first of which will take place in June. Enterprise City UK is a new digital, tech and creative eco-system for Manchester – a place for innovators, creators and makers; trailblazers, pioneers and leaders.

Gary Tidmarsh, Chairman of Levitt Bernstein, said: “It’s a privilege to be able to work on and bring these two landmark buildings back to life, both of which will add to Manchester’s already vibrant cultural scene and consolidate our association with the city.”

Mike Ingall, Chief Executive at Allied London, said: “We enjoy working with Levitt Bernstein as they have a creativity that both informs and matched our vision, which helps deliver what are often complex reuse projects. We worked jointly on the Brunswick centre to great acclaim, and will do so similarly on London Road Fire Station and Old Granada Studios”.

The two projects are currently with planning and due to start on site later in 2017.

Four Seasons to Bring Legendary Service to the Seas

The Launch of a Luxury Yacht Experience in partnership with luxury shipping experts Marc-Henry Cruis...