The iconic hotel has returned with its refreshed new look, offering guests a compelling mix of culture, heritage and charming hospitality.

Raffles Grand Hotel d’Angkor, one of the most iconic heritage properties in Southeast Asia, reopens its doors to guests on 1st June 2022 for the first time in almost three years.

First opened in 1932 and widely celebrated as La Grande Dame de Angkor, the hotel has been welcoming discerning travellers and famous faces – from Charlie Chaplin to Jackie Kennedy and Michelle Obama – to the historic heart of Cambodia for almost ninety years. 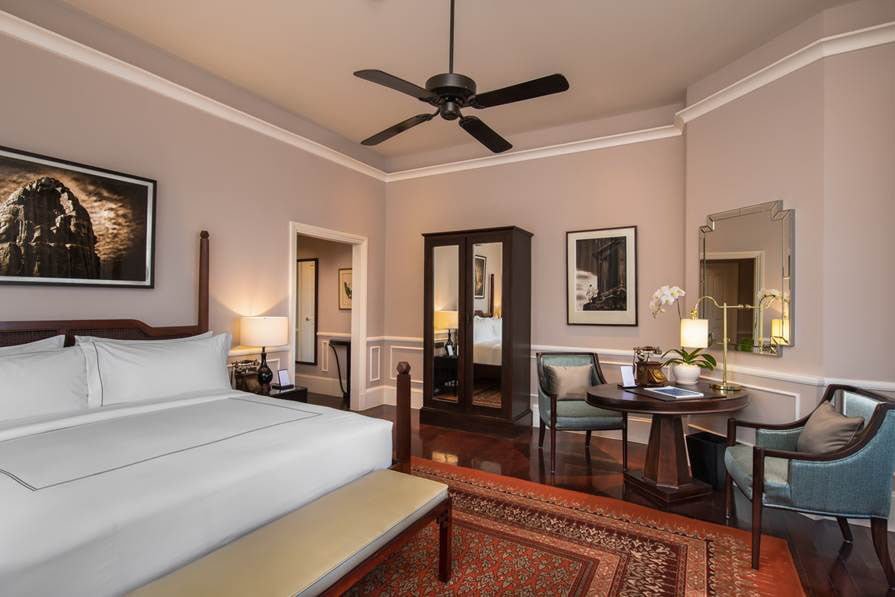 Above: The newly renovated Landmark Room still features vintage touches such as a rotary telephone. Top: Guests are welcomed by a doorman at Raffles Grand Hotel d’Angkor’s gravel driveway.

The hotel underwent a delicate transformation in 2019 with rooms and suites receiving a meticulous facelift before the global pause in travel. The guestrooms feature lighter and brighter interiors as well as the addition of Segafredo coffee machines, USB charging stations and Simmons pillow-top mattresses. The French windows, which swing open to views of street scenes or the plantation-style grounds of the hotel, have been upgraded, and each room now has a writing desk and vintage rotary telephone, thanks in part to the added floor space created by removing cabinets and replacing them with built-in wardrobes. All bathrooms have also been upgraded with new Italian tiling and rain showers. The traditional ceiling fans remain, as well as the beautiful views of the Royal Gardens or the resort’s iconic swimming pool.

It is a magnificent feeling to bring this enchanting hotel back to life,” said General Manager Dennis de Groot. “The Grand Hotel is a national treasure, and its storied history is testament to Cambodia’s colourful past. It was originally built as a rest stop for archaeologists and adventurers seeking to explore the ancient kingdom of Angkor Wat. As we prepare to celebrate the hotel’s 90th anniversary this year, we are delighted that this hotel can continue to set the standard for luxury hospitality, where travellers arrive as guests, leave as friends and return as family”.

Returning guests will notice that the famous façade and entire exterior of the hotel now shines white, rather than its former cream-beige hue which was the colour of French colonial architecture across Indochina. 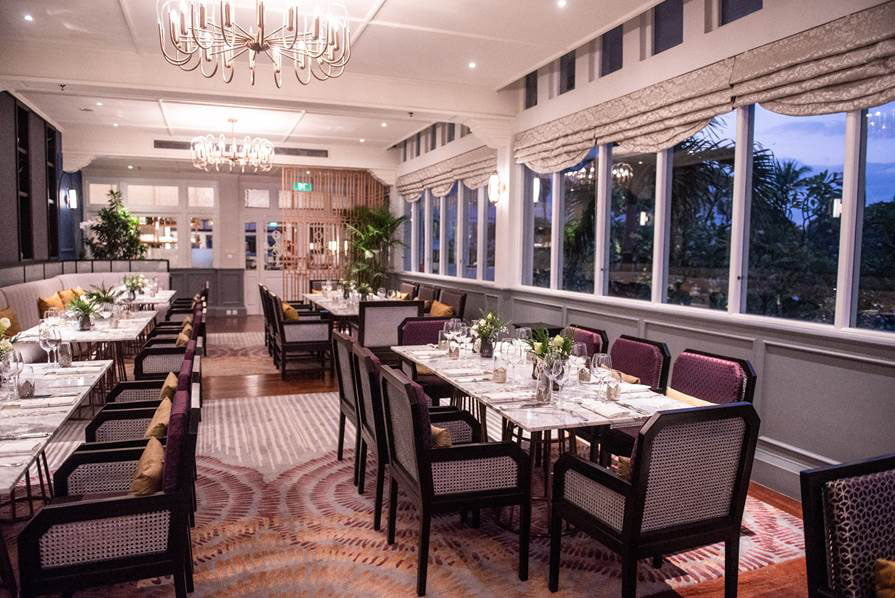 Another fresh addition to the hotel is the Raffles Marquee, an elegant events centre situated within 15-acres of lush French gardens that plays host to everything from Khmer performances and fashion shows to wedding receptions and business conferences. This fully air-conditioned marquee offers a truly unique setting for sophisticated events in the enchanting town of Siem Reap.

Traditionalists can rest assured that the hotel’s original teak and wrought iron cage elevator remains, as does the vintage ambience of the Elephant Bar and the checker-tiled lobby, which over the decades has witnessed a guest list of royalty, film stars, writers and artists.

Designed by French architect Ernest Hébrard in a style that combines Khmer art and furnishings with Art Deco influences, the Grand Hotel first opened in 1932 with just 63 rooms, all with private bathrooms – a revelation in its day. The property, along with its sister heritage hotel, Le Royal, in Phnom Penh, was taken over by Fairmont Raffles Hotels International in 1997 at the invitation of Cambodia’s King Sihanouk.

Raffles Grand Hotel d’Angkor was recognized this year by US magazine Travel + Leisure as among the top 500 hotels in the world.

Raffles Hotels & Resorts
Raffles Hotels & Resorts boasts an illustrious history and some of the most prestigious hotel addresses worldwide. In 1887, Raffles Singapore set the standard for luxury hospitality, introducing the world to private butlers, the Singapore Sling and its enduring, legendary service. Today, Raffles continues this tradition in leading cities and lavish resort locales, enchanting travellers with meaningful experiences and service that is both gracious and intuitive. Connoisseurs of life choose Raffles, not merely for its aura of culture, beauty and gentility, but for the extraordinary way they feel when in residence with Raffles. Each Raffles, be it Paris, Istanbul, Dubai, Warsaw, Jakarta or the Seychelles, serves as a venerated oasis where travellers arrive as guests, leave as friends and return as family. Raffles is part of Accor, a world leading hospitality group counting over 5,300 properties throughout more than 110 countries, and a participating brand in ALL – Accor Live Limitless – a lifestyle loyalty programme providing access to a wide variety of rewards, services and experiences.