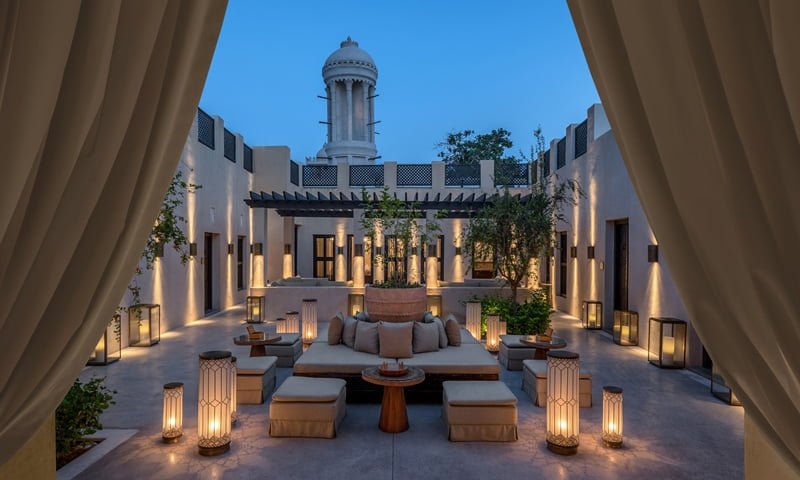 A year after Al Bait Sharjah opened in the U.A.E. as an antidote to the towering hospitality ambitions of nearby Dubai, the resort has won acclaim as one of the most remarkable new hotels in the world.

Travel + Leisure magazine has named the resort in its 2020 IT List, its 15th annual compendium of the best and brightest new hotels in the world. In all, 72 new properties in 32 countries qualified for inclusion on the list after a rigorous evaluation of hundreds of new hotels across the globe by the magazine’s editors and its global network of expert travel writers and agents.

Only one other hotel in the Middle East made this year’s IT List, and just three other hotels from the region have won placement on T+L’s list over the past five years.

About the designation, Travel + Leisure notes Sharjah’s artsy appeal and writes that Al Bait’s “rooms are like exhibits themselves… you’ll feel at home but you’ll live like royalty.”

“We’re especially gratified that Travel + Leisure realised exactly the experience we’d been steering for with Al Bait, which means home in Arabic,” said GHM Chief Executive Officer Tommy Lai. “That the resort is a place that feels like home, albeit a home for royalty.”

Landing a place on the IT List is widely regarded as one of the two most important new hotel accolades to be had in the hospitality industry. In the wake of the Travel + Leisure news, the resort’s operator, GHM, is moving the property under the umbrella of one of the most storied brand names in Asian-inspired hospitality — The Chedi. The resort will now be known as The Chedi Al Bait, Sharjah, UAE, developed by Sharjah Investment and Development Authority (Shurooq) and managed by GHM.

The Chedi name dates to GHM’s founding in 1992 and was first deployed for hotels on Phuket in Thailand and at Bandung in Indonesia. Sanskrit in origin, the Chedi name references realms of peace and tranquility and has served as GHM’s most significant brand.

“In the very DNA of the Chedi brand, there are strands of Asian-inspired design wound about a core of local indigenous tradition,” said GHM President and Co-Founder Hans R. Jenni. “In Sharjah, we’ve celebrated local aesthetics and heritage by founding the resort on four homes once occupied by prominent Sharjah families, including the residence of Ibrahim Bin Mohammed Al Midfa with its magnificent barjeel (wind tower).”

The resort’s overall design pays homage to these original four homes, and a purpose-built museum on property tells the Al Midfa story in two generous galleries.

With its embrace of such heritage, with the recognition conferred by the Travel + Leisure award, and with the power of the Chedi brand, Jenni said the resort is poised to cultivate another level of luxurious appeal.

Elsewhere, GHM now flies the Chedi flag at The Chedi Andermatt in Switzerland, The Chedi Luštica Bay in Montenegro and The Chedi Muscat in Oman.