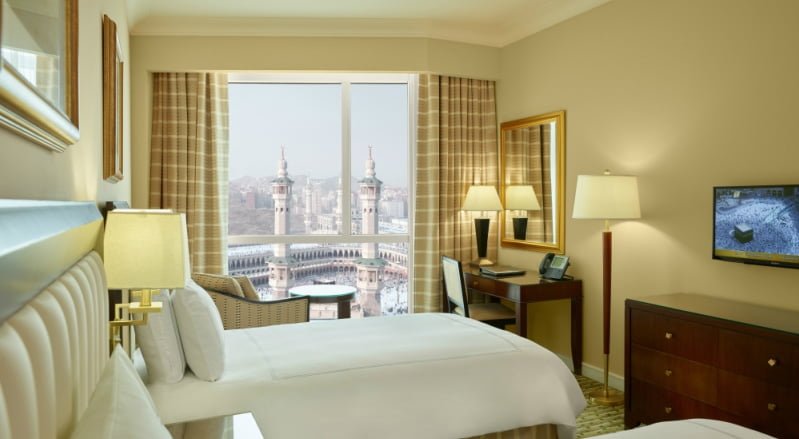 Swissôtel Hotels & Resorts has opened its second hotel in the Kingdom of Saudi Arabia’s Holy City, the 1,624 room Swissôtel Al Maqam Makkah. Overlooking the Masjid Al Haram in the Abraj Al Bait complex, the hotel is the only property in Makkah to have two entrances within the complex; from Um AL Qura Tunnel and Ibrahim Al Khalil Street.

‘We are delighted to open our second Swissôtel hotel in the Holy City and begin welcoming pilgrims and guests. The arrival marks the addition of the fourth hotel in Makkah with a further five branded luxury and upper upscale properties in development in neighbouring Jeddah and Riyadh. We are extremely proud to offer incredible variety and choice for travellers to the region,” said AccorHotels chief operating officer Middle East, luxury brands, Sami Nasser.

Swissôtel Al Maqam Makkah’s guestrooms and suites range from 32 to 84 square metres in size, with the majority providing unobstructed views to the Haram area and Ka’aba. The hotel’s restaurants include the Masharif Tea Lounge and Al Khayraat, a casual all-day dining restaurant which seats upwards of 2,500 guests in one seating.

The hotel is flanked by four other properties within the AccorHotels portfolio, Raffles Makkah Palace, Fairmont Makkah Clock Royal Tower, and Pullman ZamZam Makkah, in addition to Swissôtel Makkah, the first Swissôtel in Makkah which opened in 2012. In total, the AccorHotels properties in Makkah boast a combined number of rooms in excess of 6,000.

The opening of Swissôtel Al Maqam Makkah adds to a growing portfolio of AccorHotels managed hotels currently under development in Saudi Arabia, including Swissôtel, Raffles and Fairmont hotels in Jeddah all slated to open before 2020, in addition to Fairmont Riyadh, Business Gate which will open in late 2017 and ibis Styles Makkah. A total of 38 AccorHotels properties are under development across the Kingdom.

Also in the Middle East pipeline for the next five years are Swissôtel Citystars Sharm El Sheikh and a property in ‘New Cairo’ – Swissôtel Katameyah in Egypt.