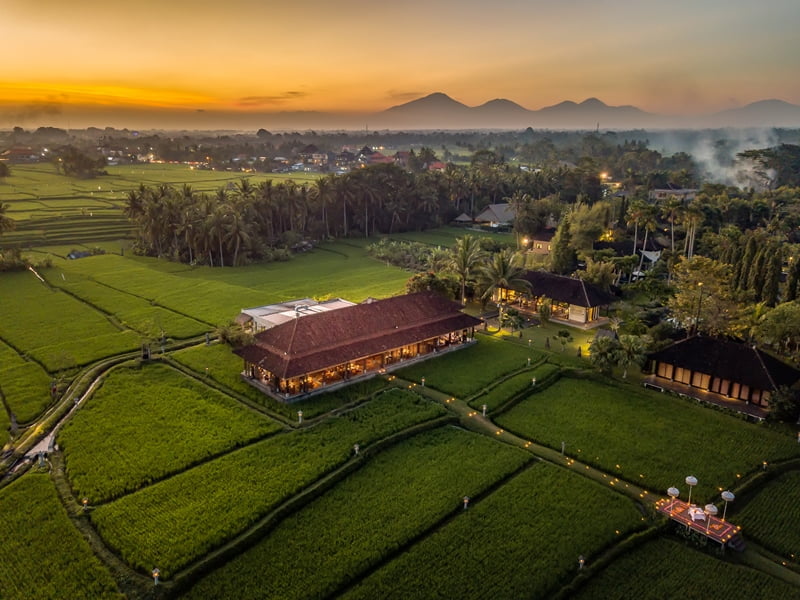 This month after nearly two decades under management by GHM, the once private family estate of noted Indonesian architect Hendra Hadiprana is returning to its roots and relaunching as Tanah Gajah, a resort by Hadiprana. The idyllic 20-key property, set amid the rice paddies in Bali’s spiritual heart of Ubud, will be the flagship resort of a new group, Hadiprana Hospitality.

More than a name change is underway at this Leading Hotel of the World. The resort is launching a new tapas lounge with one-of-a-kind Balinese artwork carved into the ceiling. Its extensive art collection is expanding with new purpose-built installations. And the resort is building more bridges into the depths of Bali, including an off-the-beaten path trek that carries guests to another Hadiprana estate.

Tanah Gajah was built in the 1980s as a holiday home for the legendary designer and transformed into a resort in 2004 when Hadiprana’s imagination conjured the possibility of another estate nearby. Though he relocated his family from the five-hectare property, his art collection remained and continued to evolve as he added myriad sculptures, antiques, and artwork from his travels.

As the resort comes back into the family, the founder, who passed in 2018, will be the inspiration for the art rather than the connoisseur who supplied it. The ceiling of the restored Huiyam villa, that was the estate’s first building, is now adorned with a traditional Balinese painting that shares Hendra Hadiprana’s life story with guests who glance upwards. Huiyam is also the location of a new tapas outlet, Panen Padi Lounge. The resort’s second dining option commands a prime location with views of a tranquil swan pond to one side and lush rice paddies on the other.

“Hendra Hadiprana defined Indonesian luxury hotel design as we know it today,” said Tanah Gajah’s GM Deasy Swandarini. “He was the man behind several upscale hotels and resorts across Indonesia. Although it was at Tanah Gajah, his home, where he really groomed his passion for design, and where we plan to continue his story.”

Reverence for local art is a core pillar of the newly rebranded property. The Bird Lounge – first built in 1993 and dedicated to Bali’s Birds of Paradise – has been refurbished and complemented by a new dynamic artwork installation of a menagerie of birds.

Delving into what is truly local and sharing that with guests is one of the group’s core visions. Soon visitors will venture away from the area’s well-trodden rice paddies and make their way through family-owned fields and terraced landscapes all the way to Bumi Duadari, Hadiprana’s other estate on the edge of the Petanu River. Guests are assigned a personal butler who will lead them on this hour-long trek through the countryside, that includes a break at Duadari.

Duadari is set to undergo a renovation at a later date to bring its rooms into the portfolio of options that can be booked through Tanah Gajah. This closer relationship between the two Hadiprana sites will allow guests to experience the contrasting sides of Ubud – valley and jungle and rice paddies and gardens.

Tanah Gajah’s local roots will be strengthened with the renaming of key sites on the property to reflect its origin. The Restaurant is now The Tempayan, named for the large traditional earthenware jars that decorate the heart of the restaurant.

“Sometimes evolving means returning to the place where you first began,” added Swandarini. “With the change we’re honouring where we came from and using that as inspiration to fine tune what’s in place and expand on what works to create something truly extraordinary.”