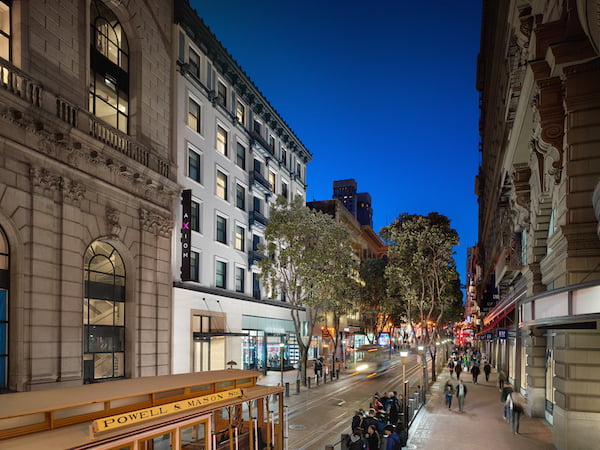 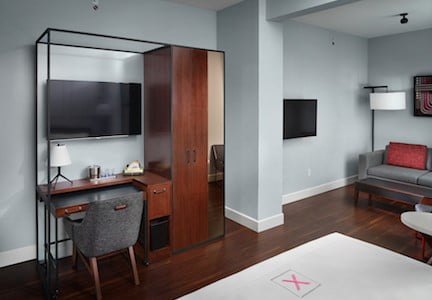 Designed by New York-based firm Stonehill & Taylor, the hotel is positioned in what was originally the Turpin Hotel. Transforming the historical landmark, Stonehill & Taylor have infused a contemporary and tech-forward design inspired by the history and pulse of innovation in San Francisco. Geared to travellers of the digital generation who blur the lines between work and play, the new hotel will offer 152 keys and a variety of social settings.

Originally built in 1908, the hotel building is located next to Hallidie Square; whose namesake Andrew Smith Hallidie first invented the steel cables that later moved his other invention – the iconic San Francisco cable car system. Inspired by San Francisco’s continued history of innovation, from Hallidie’s cables that still run hidden under the city streets to it’s present-day start-up culture, the designers created the Axiom as a celebration of cables, lines, and connections that carry the energy of invention and tie together both contemporary and historic technologies.

Stretched out along the block connecting Cyril Magnin to Powell Street, the Axiom’s lobby consists of a series of linked rooms including the Turn Cafe, Hallidie Lounge, Cloud, Hub, and a unique entry tunnel. To create a memorable arrival experience, Stonehill & Taylor designed a tunnel split with lines of light that cast dramatic shapes and shadows as guests walk through to enter the hotel. Several historical features were preserved in the lobby including the original steel columns, molding, and iron railing along the mezzanine.

Light plays a large role in the design of the hotel overall. The main focal point of the lobby is a large, deconstructed chandelier, custom-designed by Stonehill & Taylor, which spans the double height space of the Turn Cafe. The hotel’s light wells feature large painted murals by local emerging artists Antoine Marnata and Robert Gonzalez.

Glitching, a byproduct of current and historic video screen technology, is explored in numerous ways throughout the hotel’s custom art collection. The contrast in these pieces speaks to the juxtaposition of the traditional with the beacon of technological change and the connectedness of the current day. The Hallidie Lounge, an homage to the inventor, features books, vintage photographs, and curiosities in a cozy library setting, along with a framed portrait of Andrew Hallidie that slowly decomposes into pixels and reassembles itself, furthering this link between past and present.

Each guestroom’s design is minimalist and combines traditional and modern aesthetics. The use of traditional applied molding feels fresh combined with the bold choice of uninterrupted powder blue wall colour. The leather headboard, beige bedding and curtains, and mid-century style wood side table stand out against the blue backdrop, while contemporary art pieces in the rooms are juxtaposed with glass pendants in classic silhouettes. Unexpected pops of colour, such as magenta lining the interior of the case goods, bring an added element of surprise to the room design.

Historical references continue in the guest rooms, with lights running on cables from the ceiling and an industrial style rolling bathroom door that doubles as mirror. Guest corridors have an industrial feel, with exposed-pipe ceilings painted black and factory-style lighting fixtures. Inspired by the ‘tech generation,’ guest rooms feature strategically placed, easy-to-access power sources, as well as smart TVs.