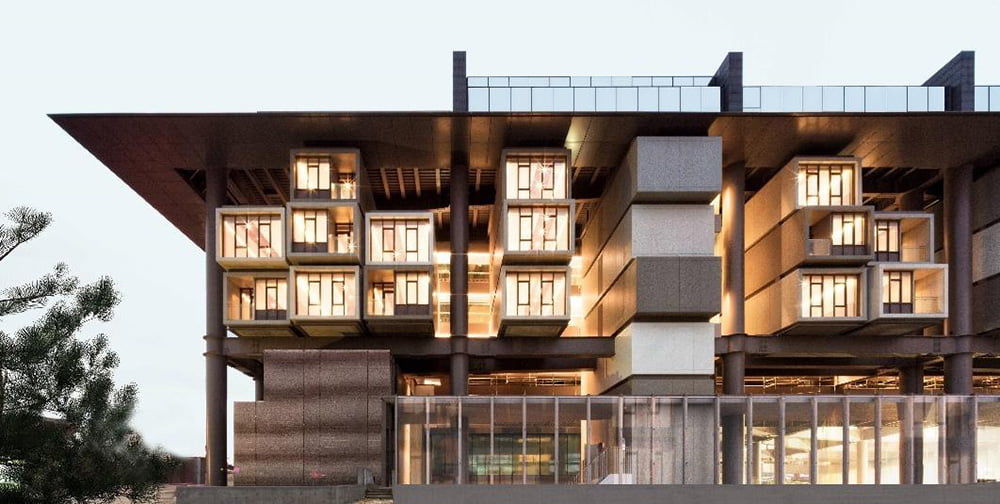 The 200-room architecturally-striking The Museum Hotel Antakya in Turkey is set to open on 1 January 2020. What began as the foundations of a new five-star luxury hotel in the heart of modern Antakya in the Eastern Mediterranean, turned into one of the most astounding finds of the 21st century as archaeological excavations revealed five layers of history spanning 13 civilisations, including 30,000 ancient artefacts and the world’s largest single-floor mosaic dating back to the 4th century. The building was then raised to make room for a vast open-air national archaeology park where guests can step out of their rooms into 23 centuries of history.

Set on the foundations of the ancient city of Antioch, with views onto the nearby St Pierre, the world’s first cave church, The Museum Hotel Antakya is a remarkable revival of an ancient heritage site. Designed by renowned Turkish design firm Emre Arolat Architecture (EAA), the contrast between the highly contemporary steel frame with stacked sheltering rooms, linked by walkways and bridges, above an expansive archaeological site is striking. Terraces and gardens located under the canopy enhance the experience.

Guest rooms at The Museum Hotel Antakya, ranging from Superior to Suites, are serene with neutral décor, copper accents, warm wooden floors and views onto the ancient mosaics below and surrounding Habibi Neccar mountains. Local, cultural references come from mosaic-inspired designs decorating walls and en-suite marble bathrooms and woven Antakyan tea trays. The four-bedroom Nas Konut residence is perfect for longer stays with private lift access, a sun terrace, walled garden, boardroom and kitchen. The lobby, restaurant and lounge are located on the lower levels of the hotel connecting with the archaeological site.

Delving deeper into the 2300 years of antiquity, visitors will feel history in-situ as glass panels and open-air walkways throughout the hotel look out directly onto the ancient discoveries below. These discoveries form part of a five-layer, 17,132 square-metre national archaeology park, which is set to open to the public in January 2020 as part of the state-owned and operated Necmi Asfuroğlu Archaeological Museum (NAAM), named after the owner of The Museum Hotel Antakya.

Guests can marvel at the world’s largest single piece floor mosaic, at 1,050 square-metres, revealing an undulating flow that tells a story of devastating earthquakes and rerouted rivers. Also on display is the world’s first marble sculpture of Eros, all in one piece, 70-cm tall and dating back to 200AD, which led to the discovery of the exquisitely rare 2nd century Pegasus mosaic featuring 160 shades of natural plant-dyed stones creating an almost photographic detail, together with city walls dating back to 300 BC. Visitors can further unlock the mysteries of Antioch in the museum through videos, touch screens and 3D projections.

The Museum Hotel Antakya also offers an outstanding hospitality-concept, with five restaurants and bars, from an all-day café, poolside space for secret garden shishas and snacks, and opulent rooftop bar, to a restaurant overlooking the excavation site serving local specialities. Each restaurant serves a tantalising blend of local ingredients and dishes that mix ancient and modern techniques befitting the city awarded UNESCO Creative City of Gastronomy.

The hotel is also home to the city’s largest spa, wellbeing and fitness hub. The 3,300 square-metre rooftop wellness centre includes Balans Fitness Centre with state-of-the-art fitness suite and studio for classes such as Pilates and spinning, an outdoor infinity pool and children’s pool and an indoor pool with Jacuzzi and Vitamin Bar. Tradition meets luxury in a rooftop bathhouse experience with mixed and female hammams. Balans Spa is inspired by the hotel’s mosaic of Apollo & the Muses and the visible ancient Roman baths with six treatment rooms and a VIP Spa Suite with two massage beds, a Turkish hammam, sofa, Jacuzzi and garden.

Events spaces are ideal for fairytale rooftop weddings and gala events, with the ballroom and four rooftop meeting rooms offering state of the art technology, garden access and breakout rooms.