Top architects collaborate on hotel in the Alps 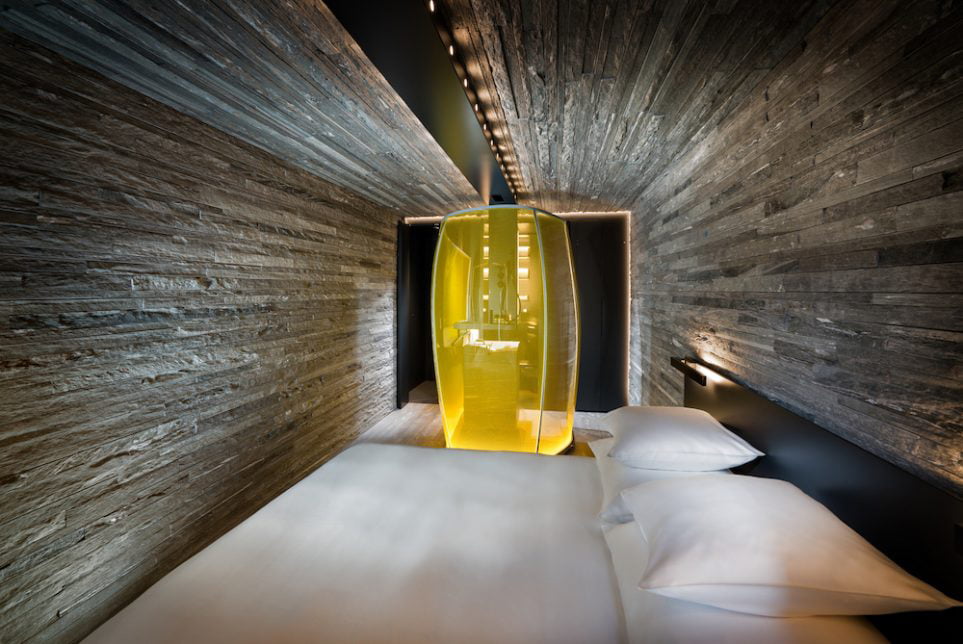 House of Architects by Swiss hotel 7123 features a series of rooms designed by some of the world’s leading architects. The five-room series split three Pritzker prizes among them and the talent of arguably four of the most important living architects today.

Two rooms share a close history with Japanese history. Ando, pictured above, was created by Tadao Ando, a Pritzker-prize winner. His major influence for the room embedded in the Alps were the austere visuals of Japanese tea rooms.

Kengo Kuma, who industry leaders say is next up to win the coveted architecture prize, shares his name with the next obviously Japanese-inspired room. Featuring wooden panels that radiate from wall to ceiling, the fine handicrafts draws inspiration from notoriously exquisite Japanese woodworking.

From traditional undertones, the series moves to a more modern palette from another Pritzker winner, Peter Zumthor. A Swiss himself, his rooms are colourful and detailed with hand-painted curtains of Habotai silk. Ironically, the room’s modernity is at no small measure due to a wall finishing technique from the Renaissance period.

Thom Mayne built two rooms in two contrasting themes: wood and stone. The American Pritzker prize-winner used select wood and stone materials for his suites. For the wood-themed room, indigenous panels run from floor to the ceiling. In the stone room, Vals quartzite and its interesting milky patterns coat the entire space. An awe-inspiring sculpture engulfs the shower for both spaces.

The hotel has been recently renamed to 7132, turning the zip code into a proper noun. It is a move that marks its luxury and at the same it pays homage to the natural beauty of the property’s environment. Located in Vals, the hotel offers return flights on helicopters for its hotel guests.

The main draw of the 7132 is its thermal baths designed by Peter Zumthor and built in 1996. An architectural feat, the masterpiece required 60,000 slabs of local quartzite to complete.