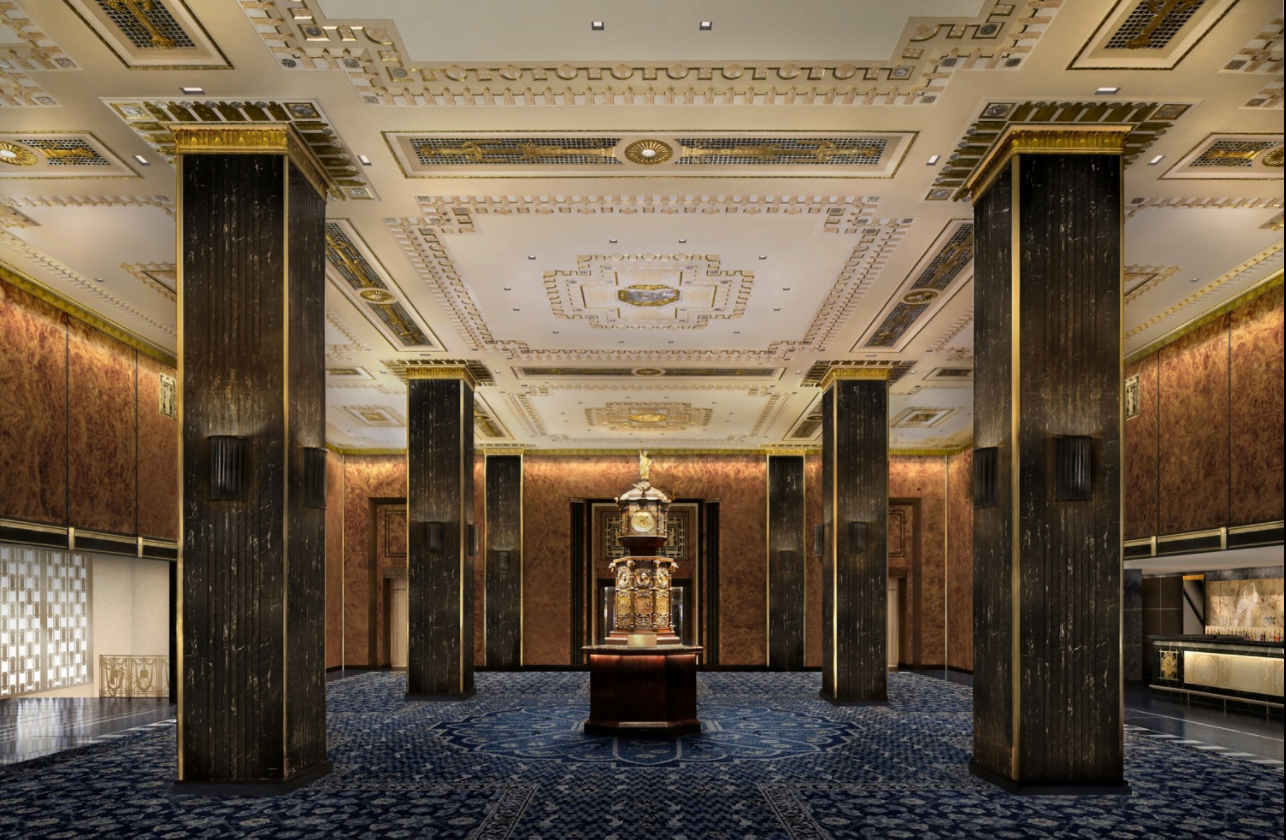 Waldorf Astoria New York has released proposed plans for the meticulous restoration and revitalisation of the historic property’s landmarked exterior and interior spaces. The plans, which were prepared by a world-class design team including leading architectural firm Skidmore, Owings & Merrill (SOM) and renowned interior designer Pierre-Yves Rochon (PYR), were submitted for public review by the New York City Landmarks Preservation Commission. The plans restore all landmarked spaces, ensuring the historic public and event spaces will be accessible for generations of New Yorkers and visitors alike.

This restoration is among the most complex and intensive landmark preservation efforts in New York City history. If approved, it will revive key elements of the Art Deco masterpiece that have been altered over time, providing an experience that reflects the hotel’s original intent while delivering an enhanced visitor experience by modernising the building’s functional capability to a 21st Century standard of luxury.

The proposed restoration plan is part of a major renovation that will set a new standard for service in New York when The Waldorf re-opens in two to three years. The hotel will continue to be operated by Hilton as part of a 100-year management agreement.

“We are at an exciting and transformative point in Waldorf Astoria’s renowned history, during which time Waldorf Astoria New York will be restored to its original grandeur while maintaining a modern and inspirational look and feel,” says John T. A. Vanderslice, global head, Waldorf Astoria Hotels & Resorts. “It is an honor to be working with such a talented architectural and design team to breathe new life into this iconic hotel and provide unparalleled True Waldorf Service to its future guests.”

“We have assembled a world-class design team with unparalleled experience restoring and revitalizing historic properties to create a proposed plan that treats the Waldorf Astoria New York’s history with respect and dedication to detail,” said Brandon Dong, Anbang. “The restoration of the beautiful landmarked spaces is central to the Waldorf Astoria New York’s future as a New York City icon and global destination.”

PYR will lead the interior design of the hotel, including its public and guest room areas. Since its founding in 1979, the firm has focused exclusively on five-star luxury hotels – including the forthcoming Waldorf Astoria Beverly Hills scheduled to open June 2017 – fine dining restaurants and private residences. PYR’s interior design has helped preserve the spirit and design heritage of some of the world’s most iconic hotels.

“Our design for the Waldorf Astoria New York reclaims the full potential of one of New York City’s most legendary buildings and opens a new chapter in the hotel’s celebrated history. The Waldorf Astoria has been an audacious civic icon since it first opened in 1931, and we are honored to be leading the effort to restore this Art Deco masterpiece, while turning it into a world-class destination for the 21st century,” said Roger Duffy, Design Partner, SOM.

“Protecting the spirit of this iconic property and reflecting its history through a modern, more forward-thinking lens will be at the heart of the hotel’s interior design. From the overall atmosphere down to the finest Art Deco details, American grandeur and international glamour will meet in the Waldorf Astoria New York – no other hotel in New York will compare,” said Pierre-Yves Rochon, Principal and Global Design Director, PYR.

In addition to historic public and event spaces restored to their original intent, the Waldorf will feature new guest rooms, suites and condominiums when it reopens.

Originally opened in 1893 on the present site of the Empire State Building, the Waldorf Astoria New York opened at its current Park Avenue location in 1931, was designated an official New York City landmark in 1993 and had its most important interior spaces landmarked in 2017.

Renderings of the proposed restoration can be viewed here.