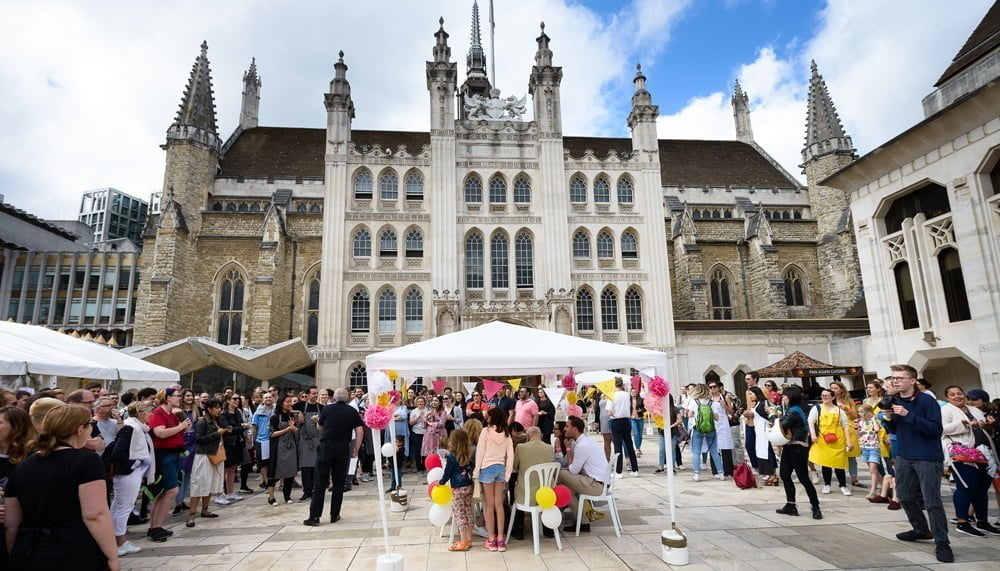 Last weekend saw a baking spectacle in the form of WATG’s Architectural Bake Off at the London Festival of Architecture. In true Bake-Off style, the competition was held in a tent at Guildhall Yard, where visitors could catch a slice of the action as different teams constructed their masterpieces.

Battling it out for the Bake-Off title this year were entries from both student and professional teams, who had compiled layers of sponge, icing, and confectionery in to all manner of well-known buildings (some more recognisable than others) in an attempt to impress the judges.

After much deliberation, Benoy were crowned grand winners with their ‘Barbicake’ entry, an entirely edible version of the Barbican, made from a scrumptious mix of chocolate fudge, wafer, blueberry swirl, ginger and Nutella.

The annual highlight of the London Festival of Architecture saw the biggest names in the field including SOM, Rogers Stirk Harbour + Partners, Squire + Partners and Wilkinson Eyre swap pens for rolling-pins and battle it out to create the best gourmet version of iconic buildings and landmarks. Stand-out entries included a delicious edible edition of the London Aquatics Centre by Zaha Hadid Architects, winning tastiest bake, and the Imperial War Museum by Stride Treglown, which received an honourable mention for its ingenious use of wartime flavours.

For the very first time, three elite universities also gathered for the inaugural Student Bake-Off which welcomed aspiring architects and bakers alike to flex their culinary and creative skills. Central Saint Martins whipped up an immaculate version of The Secession Building in Vienna while University of Greenwich baked Old Royal Navy College. It was London Metropolitan University who narrowly edged it to be named champions with their semi-demolished version of Robin Hood Gardens, which expertly combined layers of phenomenal sponges of ginger, pistachio and classic Victoria.

The edible entries were judged by a world-class panel of industry experts including Tom Hetherington, Architect and Great British Bake-Off competitor; Jane Duncan, 75th RIBA president; Bethan Ryder, Digital Editor at Wallpaper*; Peter Murray, Founder of the London Festival of Architecture; Carolyn Dwyer, Director of the Built Environment for the City of London Corporation and Tamsie Thomson, Director of the London Festival of Architecture.

The panel witnessed recreations of landmarks including Wilkinson Eyre’s Gasholders London, Farrells’ MI6, a version of Gaudi’s Park Güell by Squire + Partners and Tower Bridge by Make Architects. Marks were awarded for realistic representation, a creative use of materials and – of course – great tasting cakes. Bonus points were awarded for any bakes that explored the London Festival of Architecture’s annual theme of Identity.

Ashley Fauguel, Organiser of WATG’s Great Architectural Bake-Off, commented: “We’ve had a wonderful day here in the City with the teams creating some truly stunning cakes. This is our fourth year hosting the Bake-Off in London, with some of the world’s best architectural practices returning to compete. Along with the student competition, the Bake-Off has brought together both London’s current and next generation of architects for a showcase of their undeniable skill and creativity.”