From student dwellings to award winning hotels, Kit Kemp paints a colourful picture of a life in design for Emma Kennedy.

As zoom fails go, this was up there. Let me set the scene. Kit Kemp is busy. She has a design studio, a hotel chain, a raft of residential projects in progress, Firmdale’s latest hotel in New York’s Tribeca to design, and a portfolio of ongoing creative collaborations. Then there are her books, an online shop to curate, and a host of forthcoming projects she’s not at liberty to discuss yet. Her studio in London’s South Kensington is home to a team of 12 designers, including two of her three daughters Willow and Minnie, an inhouse architect and her husband and business partner Tim. So having secured a chunk of her precious time it’s fair to say I’m feeling pretty pleased with myself. I will spare you the details of the zoom and gloom saga that followed (as I like to think we have all been there), but suffice to say, technology didn’t go my way. However, it clearly takes a lot more to test Ms Kemp’s patience, and by the time the interview is underway, she is as exuberant and enthusiastic as ever.

I thought I had an idea of what Kit Kemp’s world involved, but like her interiors the more you look the more you find, so I start by asking Kit to take me back to the beginning and to how it all began. “Firmdale started life in the early eighties and was my husband’s company before I met him. It was 2-star accommodation for overseas students, and as we were barely older than students ourselves it really was good fun. At that point the closest we got to interior design, was Tim standing on a step ladder to admire a ceiling he’d painted.’’ she laughs, before adding “I only got involved when Tim secured a longer lease on the Dorset Square hotel, and we managed to get the funding to upgrade it. I don’t think I ever thought in terms of being an interior designer – that would have felt far too glamorous and sophisticated, but I wanted to do it, I was keen!”

With what Kit describes as ‘’the wonderful arrogance of youth’’ she embarked on designing their first up-scale property and I wonder how much of the Kit Kemp aesthetic that she is recognised for today was at play back then. “Well, it was the eighties…” she says by way of an explanation for her next sentence. “So, there were an awful lot of frills and furbelows. But there would have been that joy of colour and a freedom of style and probably a disregard for what really went with everything. It was considered London’s first ‘Country Hotel’ and was featured in Country Life magazine which was rather extraordinary for a central London hotel.” 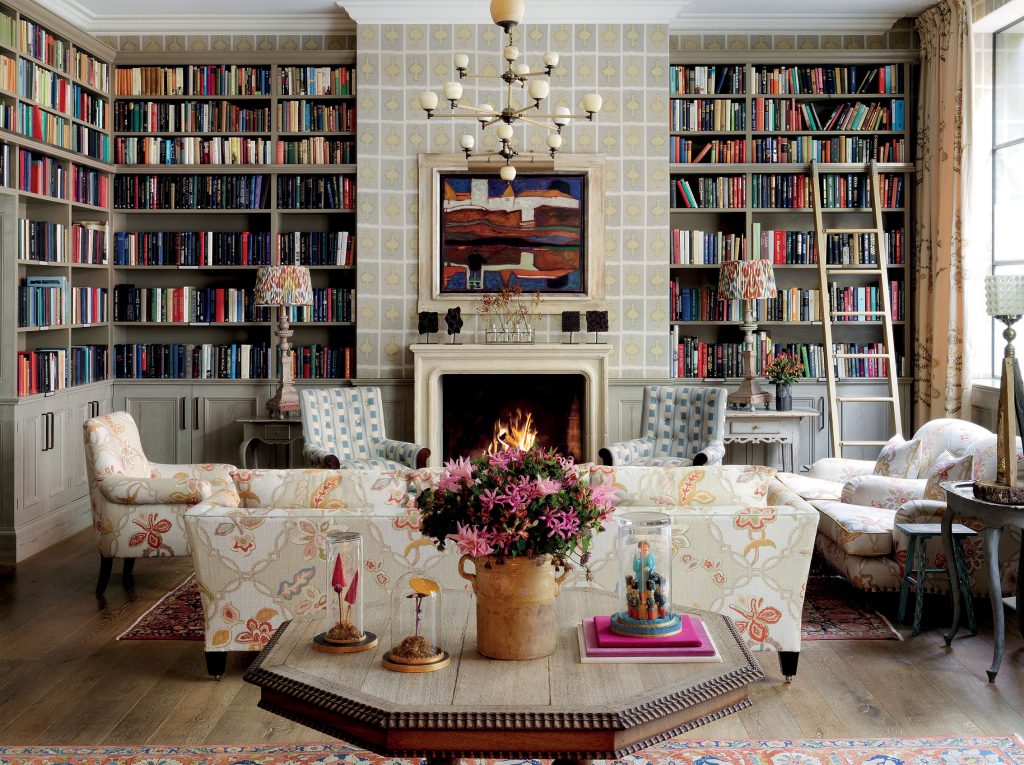 The Library at the Ham Yard Hotel

Dorset Square Hotel remains a firm favourite within the Firmdale portfolio, despite selling it in the 80’s to help fund their foray into the New York market, only to buy it back in the early 2000’s. I ask Kit if this was for sentimental reasons? “Well, it just looked so sad” she tells me. “So, we just decided to re-do it. But yes, I have always loved Dorset Square, it’s like the best in miniature. It has everything a large hotel has just on a smaller scale.” Firmdale has since gone on to open 10 hotels, eight in London and two- soon to be three- in New York. I ask Kit what the original business plan looked like and before I can get any further, she laughs and declares: “No, there was never a grand plan! It was far more organic than that. Having said that,” she added “my husband Tim, is like some sort of terrier! He just doesn’t give up…  he doesn’t see anything getting in the way of an idea, and when I’m still thinking ‘Gosh, how are we going to do that’ he’s forging ahead and making it happen. So, you definitely need people like him around you.”

However, there was a clear plan when it came to what they wanted their hotels to offer. “So often I had stayed at hotels which served interminable meals and all sorts of ghastliness. I hated that vacuum packed experience, that never made you feel a part of the city or the place you were in. There was invariably a lack of art, and what there was, was uninspiring and badly hung and so right from the start I wanted to bring a lot of original work into the hotels.” 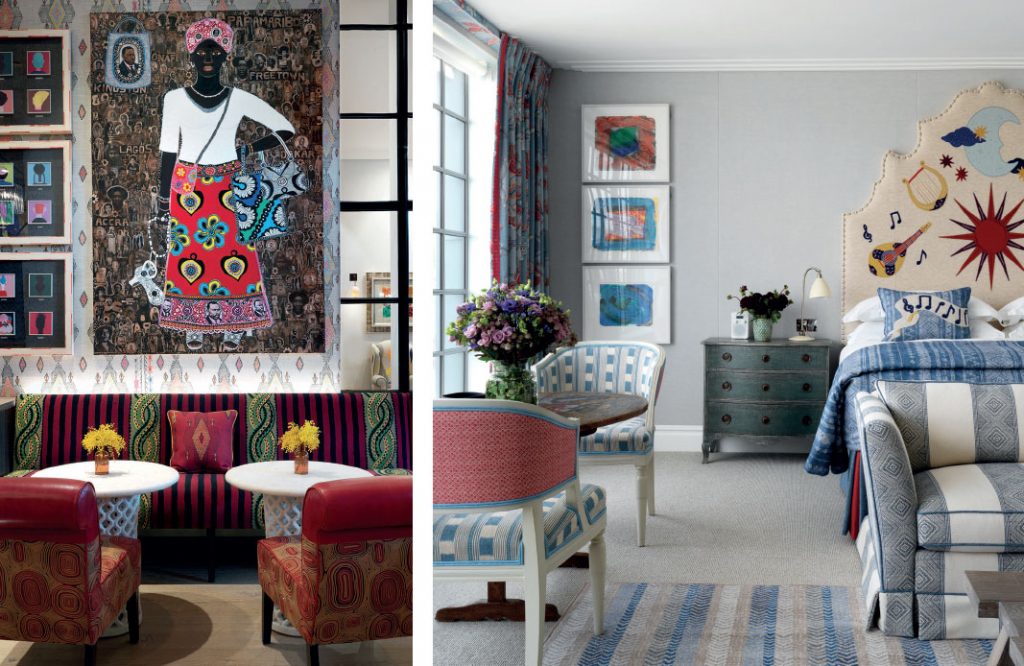 Left: Bar at The Whitby Hotel. Right: The Terrace Suite at The Soho Hotel

Anyone familiar with Firmdale hotels, would be hard pushed to have missed the diverse mix of art which forms the backdrop to many of Kit’s interiors. Her substantial art collection is well recognised and is the focus of Firmdale Art Walks in both London and New York. Guests and like-minded locals are guided through the hotels’ collections where they will see works by revered artists including Terry Frost RA and Sandra Blow RA alongside pieces by lesser-known artists like Carla Kranendonk and Hermione Skye. I ask Kit how she buys and curates the collection. Expecting to be given a list of art fairs, galleries, and unnamed dealers, instead, in what I am understanding to be Kit kemp style, the answer is far simpler. “Oh, there aren’t any rules, it’s a democratic process, I just buy what I like, and I love mixing it up. A strong oil painting can sit next to a delicate wash, it’s all about letting a painting breathe and curating it well.”

Alongside the Art walks, many of the Firmdale hotels also host collaborative crafting workshops, book talks by authors and film screenings. “It’s bringing life into the hotels and giving them a ‘living’ feeling that we feel is so important.”

Mixing it up is what Kit does best. Firmdale interiors are a layered palette of colours, patterns, and textures, that sit together harmoniously. Wandering around a Firmdale hotel is a joy. They are so beautifully curated, and just when you think you have absorbed it all, something will turn your head – a whisper of something that invites you to be curious. The smaller London townhouse hotels make you so comfortable it almost feels like snooping in someone’s beautiful home as you glance behind a display to see what’s hiding. Watching fellow guests absorbing their surroundings in the same way is equally fun, and I ask Kit if she ever stands quietly in the background to observe her guests: “Yes, I do,” she says conspiratorially. “I love doing that. When you have created something that has taken so much time and energy, by the time it’s finished you can hardly look at it. Then you hand it over to all the staff and the teams who are going to look after it and it takes on a life of its own. It’s then that I stop and think to myself, ‘did I really do this?’ and that’s when I start watching… and I find it fascinating.”

From an appliqued cushion with blanket stitch edges to a mid-century sideboard to a hand-crafted beaded chandelier, her interiors all feel so instinctive and relaxed it’s easy to underestimate the thought that has gone into it. “Well, the devil is in the detail, and a room should appear carefree but when you really start looking at it with scale and balance there’s a huge amount involved.” Aptly described as Modern British, I ask Kit where she thinks her aesthetic comes from. “I honestly think with colours, textures, and tones, so much of it is innate. I often assume everyone can do it, and then I realise they can’t and that’s always a surprise,” she tells me.

Having achieved so much in her career, and presumably little if anything to prove, I wonder if Kit still gets nervous. “Yes, I still get butterflies in my stomach at the beginning of each project, but it’s not just the big architectural ones, it’s all the smaller collaborations I do too. I like to say, ‘yes’ rather than ‘no’ in part because I think I’ll never be asked again, but then when I see the brief I think ‘Gosh, I’ll never be able to do all that!’ …but you just do!” 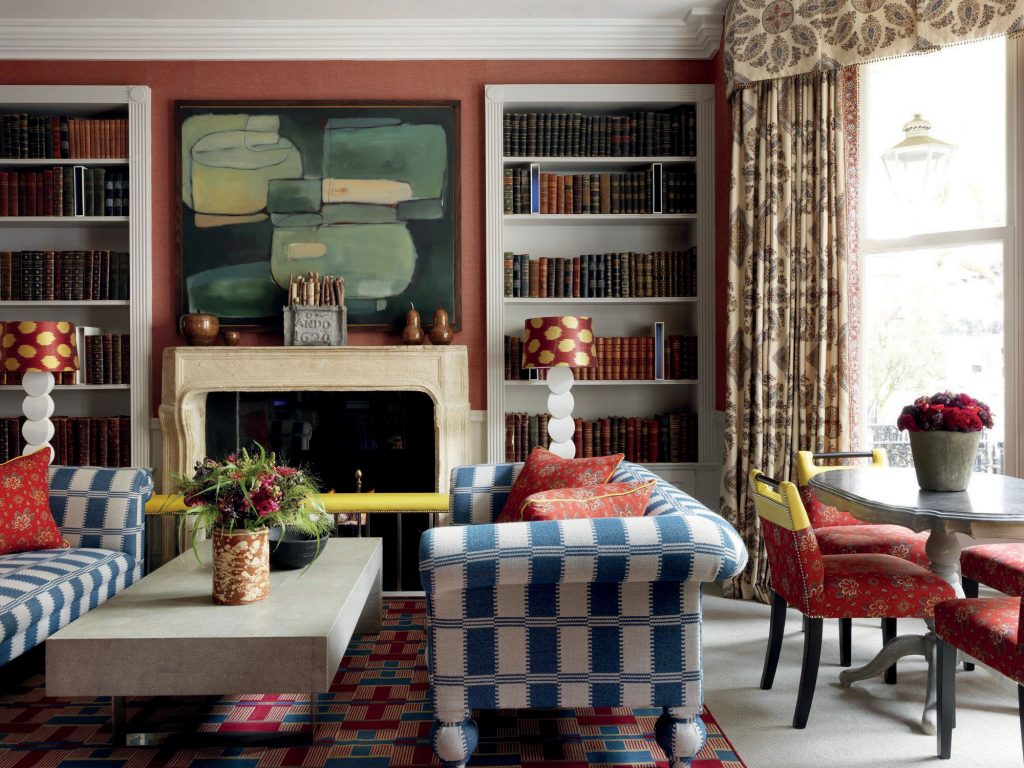 Having just completed three different ceramic collections for English pottery brand, Spode, a paint range with the doyenne of paint, Annie Sloan, and a collection of storied rugs, cushions, and bedding for American interior retailer Annie Selke, Kit’s collaborations are many and varied. Over the years she has joined forces with Andrew Martin, Christopher Farr, Wilton Carpets and Anthropologie to name but a few and is a Trustee of the British charity Fine Cell Work and the Heritage of London Trust.

With so many projects and collaborations on the go, I can’t imagine what the answer to my next question will be other than short. But I ask her all the same; what’s next on the horizon? Her enthusiasm is palpable. “Warren Street Hotel, New York is scheduled to open next year and structurally it’s ready – I just need to fill every bit of it in!” I wonder how involved she is with each project, and her answer is very clear. “Oh, I’m totally involved in every project. Nothing goes ahead without passing by my desk first. It’s a gradual, organic process of putting it together, but there’s an order that it’s done in – and that’s the exciting thing!”

I love Kit’s approach to design, life and well, pretty much everything. Her appreciation and understanding of the arts appear to be at the centre of everything she does, bringing an integrity to her designs which is hard to emulate. Narratives weave their way through her interiors like the smoke trail of a scented candle. And even though you’re unsure of the story, you know there’s one there, you just need to look a little closer.