Who needs a signature look when you’ve got Marie Soliman on board? Emma Kennedy catches up with the prolific designer to discuss design, creative influences and why opposites attract.

Arriving early for my interview with Marie Soliman, I grab a coffee and enjoy the decorous nostalgia of White City House before sitting back for some serious people watching. A couple of minutes into my favourite pastime, and Marie arrives. She’s difficult to miss, with a distinct mane of jet-black hair framing her fine features. Her quick eyes scour the busy foyer before heading my way with a warm open smile.

Marie Soliman is a creative through and through. Whatever the subject, the narrative without fail will wind its way back to design in one form or another, and she is very clear about where it comes from. Unprompted she declares “I owe my creativity to my father”. Growing up in Cairo, her father, an engineer by trade was also a talented artist. “He played the piano, he painted, he did sculptures- always creating something, and that is how I grew up.”

As a Christian, weekends were often spent visiting churches, but not just for the sole purpose of religion. It was also to introduce her to the art, which she readily absorbed, soaking up influences from around the world. “I always knew I would be an artist. My mother was a banker and hoped I would be too- but my brain just doesn’t work that way.”

Instead, she chose to study interior architecture in Cairo, and started her first job within two days of graduating. Moving to London in 2010 she worked for architects Chapman Taylor followed by HBA (Hirsch Bedner Associates) where she met her husband and business partner, Swedish designer Albin Berglund. In 2017 they co-founded luxury design studio, Bergman Design House, and have since taken the interior design world by storm, picking up prestigious awards along the way. Their approach is different, and their extensive portfolio of projects is as varied as their designs. In fact, everything about them seems to be different, not least their personalities; Marie is vivacious- a ball of energy, fizzing with ideas at every turn. Albin appears to be more reserved, the epitome of Swedish calm. Given their differences, I am keen to hear how they operate so well as a team?

I am clearly not the first to ask this question and Marie’s answer is well rehearsed. “I like to say we are Gin and Tonic; Albin is the gin, he is very subtle, very calm. We are very different, but I think we complement each other. We knew we liked working together from when we were at HBA, but even so it was tricky when we were setting up the studio. Albin was nervous because I don’t have a signature style. He used to say ‘Marie, think of all the big designers who have built their empires. They do their ivory’s and their tone on tone, and their clients know what they are getting. But you are coming with different schemes for every single project! How will you ever get a client?’ So, I told him; first and foremost, I am not a decorator I am an interior architect designing spaces not following a style.’ But he was still scared and pleaded with me for the first five years to do something people could recognise. But I told him ‘It’s too late! I’m Egyptian- I am influenced by everything I see, diversity is key for me, and that’s what I do. I am proud and I’m enjoying it- life is too short not to be true.” Hallelujah!

With such different aesthetics, while they appreciate each other’s work, they tend to have their own clients, and often there is little crossover which has arguably added to their success. “The first time a client asked for Albin to run his project, I was annoyed. But then I realised that what he wanted, Albin would be much better at delivering that specific hotel. Now we have our own clients, and it works well.” So well, that in the five years since their launch, they have accrued a design team of 67, with offices in London, Singapore, Saudi Arabia, India and now Hong Kong and soon Miami. Based at the Thames Works, Chiswick, their London studio, affectionately referred to as the ‘Kitchen Hub’ is home to 12 designers. Currently they are working on 14 projects, including Superyachts, Spa’s, Hotels, private residencies, and gyms… as well as her and Albin’s other brands and ventures.

It’s a lot of projects to manage, and I’m slightly distracted as I wonder what her day involves. “I get up at 5.00am-I only need to sleep five or six hours a night- and I work-out on my rowing machine. Afterwards I take the dog for a walk if Albin is away and get back before my daughter wakes up. After breakfast I take her to school, and then I head straight back to the office by 8.00am. I like to get in before everyone else starts fighting over the coffee machine.” she adds, “l then go through my emails and by the time the team arrive, I am ready to start my working day.” Well, that explains that then! Suffice to say, she has a healthy work ethic. “I always tell new designers; talent is one thing but turning up and showing consistency is just as important – be consistent and be ready to change and challenge yourself.”

It was my interest in the much-awaited launch of Marie’s latest interior design project By Bergman Led by Naomi Heaton, The Other House resident’s club, that was the catalyst for the interview. Set to soft launch in June 2022, The Other House is a new hospitality brand from Founder and Chair of London Central Portfolio, Naomi Heaton. Located in London’s South Kensington, and a second one underway in Covent Garden, it bills itself as a Private Members Club, offering high-end luxury to long stay travellers.

“The hotel comprises 238 self-contained resident apartments” explains Marie. “If you think about it, a traditional hotel room is a tiny compact apartment. You walk in that little corridor, you see the bathroom off to the side, the wardrobe is over there and then you have your bedroom space. The Other House is the complete opposite. You have a lovely vestibule welcoming you in, beyond that is the living area and the kitchenette, and then behind a beautiful screen you are led through to the bedroom. We have treated the screens as if they were beautiful paintings and they act as the main art in the space.” 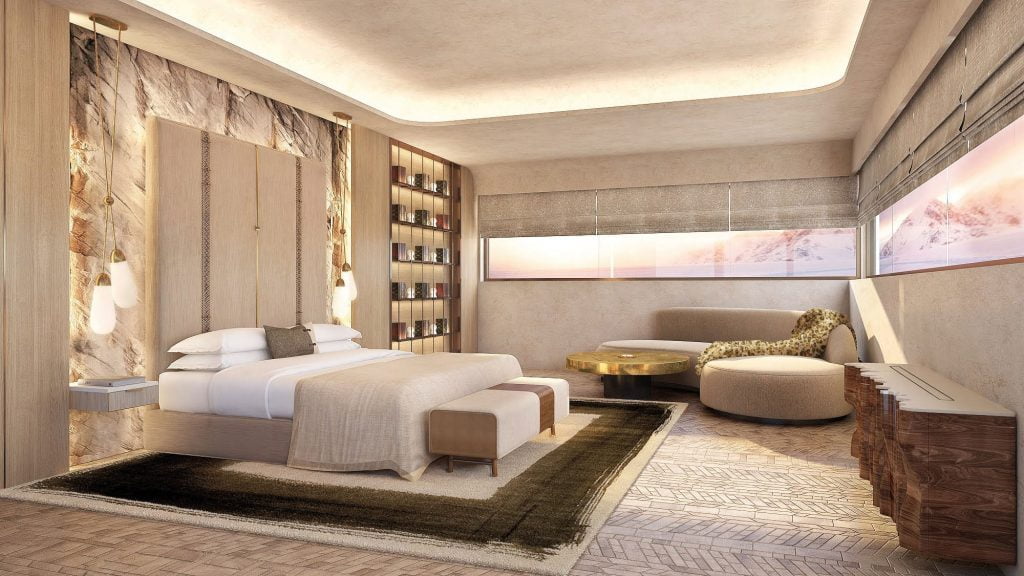 Understanding that sustainability is paramount in the Bergman Design House ethos, I wonder if this ethos was shared by her client? “Very much so” she says, nodding her head emphatically. “Naomi our client is a huge advocate of sustainability, and we enjoy working together. The entire project is 85% sustainable throughout and 95% of the suppliers were based in the UK.  Being sustainable is challenging. It affects budgets, and it can restrict you, but it makes you think harder! The brief was to create an immaculate highly driven timeless design, but more affordable. We wanted to achieve the same level of elegance and luxury, which is when keeping it sustainable really kicks in; how to magnify that beauty by playing with colours and textures. There are no marbles, no rare timbers, everything can be re-used, wiped clean without leaving marks and it still looks beautiful.” 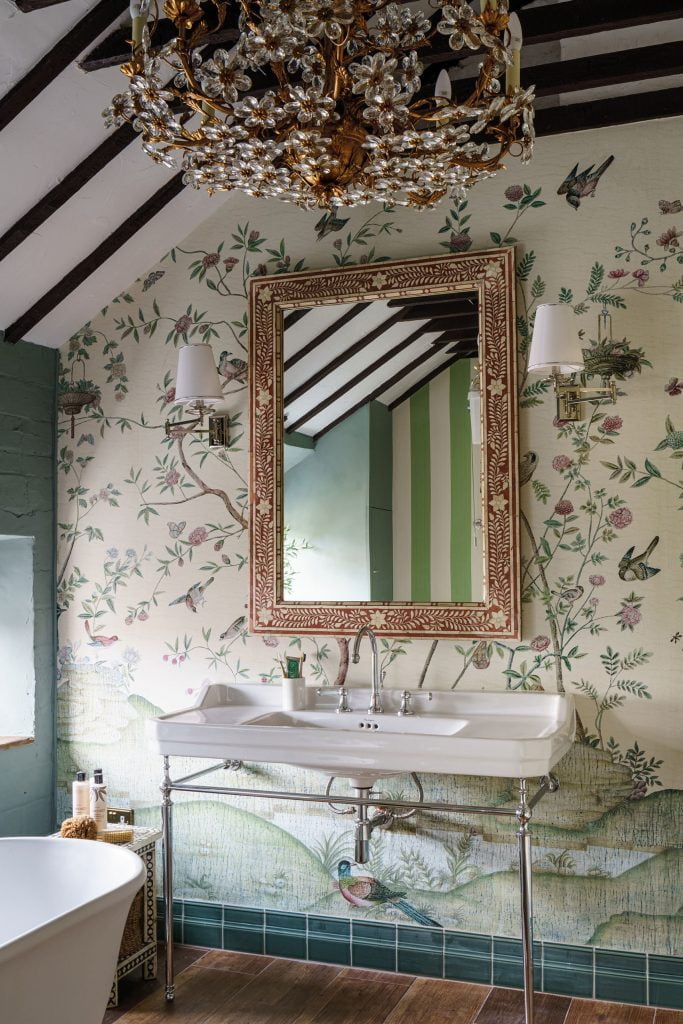 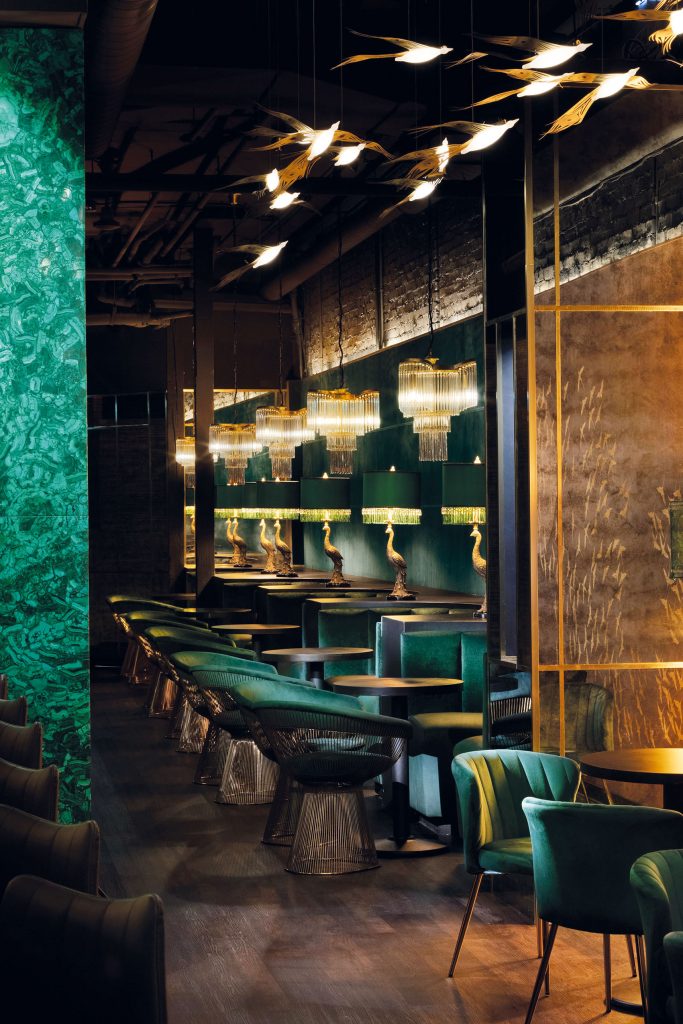 Sharing images fresh from the recent photo-shoot, the finished results are indeed beautiful. There are three distinct colour schemes to the apartments offering deep comfort in a sumptuous combination of teal blues, Cognac and wine tones, muted earthy tones and warm blues and perylene greens. Downstairs, the many amenities, including The Other Kitchen restaurant and bar areas, appear to take opulence and luxury to a whole new level. A rich mix of velvets, plaids and needlepoint textiles are offset with a medley of botanical prints, statement chandeliers, gilt framed paintings, and wall panels. The overall look is nothing short of stunning.

At times, it’s difficult to keep up with Marie, as she jumps from project to project. One minute she’s telling me the story behind Anthony Joshua and the BXR gyms she has designed, and the next we are on a Superyacht with Albin in Miami at the design bridge, and just as I think I’ve caught up I realise she has skipped continents, and we are back on dry land at a Speakeasy in Vancouver.  However, the last stop brings us back to the Cotswolds, and this time there isn’t a client. The Lund Collection is a small but perfectly formed one bedroom cottage in the Cotswolds and is their foray into a new line of luxury rentals, exquisitely designed as a sanctuary for guests wanting to escape the city. With the first one ready to go, and more in the pipeline, I think I can see where this is heading. “Of course, ultimately, we want our own brand of hotels” she says, and it doesn’t take a great leap of the imagination to see that happening. Though with regards to the design, the best I can offer is ‘watch this space’. One can only hazard a guess at what direction the interiors will take. 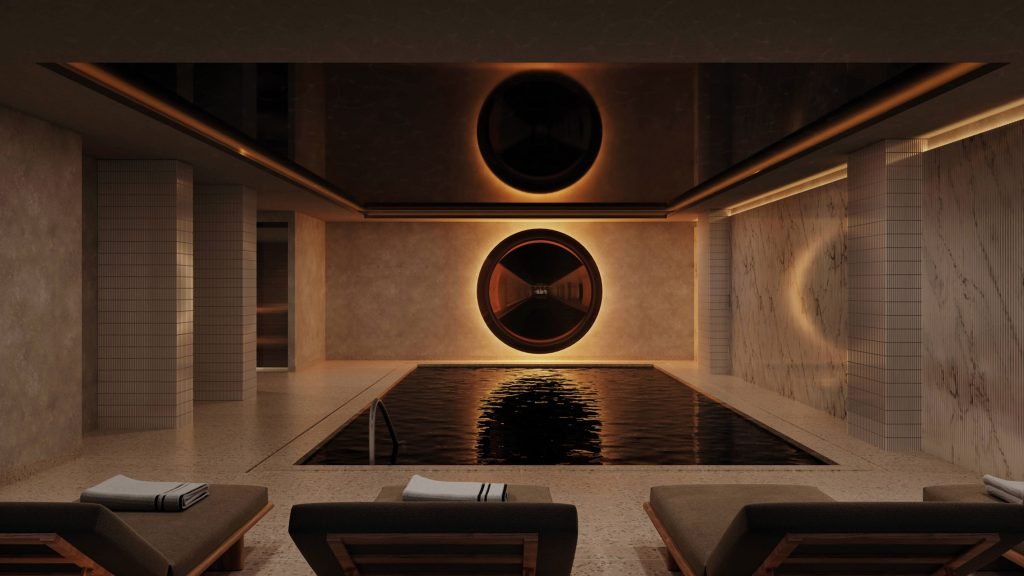