Arguably one of todays most influential interior designers, Martin Brudnizki is responsible for creating hospitalities hottest venues. Here he talks to Emma Kennedy about the importance of allowing the past to inform the future and designing without rules.

It’s hard to know where to start when profiling a designer as prolific as Martin Brudnizki. Looking for inspiration on his eponymous website did little to help the dilemma – unless losing oneself down an exceptionally decorous rabbit hole, all in the name of research counts? Keeping it simple I’ll start at the beginning.

“I grew up in Sweden,” Martin says in answer to my question. “My Mother was German and my father was Polish, and they moved to Stockholm where they brought us up on German customs with a sprinkling of Polish traditions – mainly through food. My father was a mechanical engineer and before she had children, my mother was a visual merchandiser, which she returned to later. So really, I inherited the best of both of them; the technical brain from my father and the appreciation of style and aesthetics from my mother.”

Understanding Martin had originally gained a degree in business from Stockholm University, along with a stint of modelling, I asked him how the move to interior design came about.

“I just came to it one day,” he starts. “I really didn’t know what I wanted to do when a friend of mine who had studied interior design showed me what he had done, and I just thought ‘I could do better than that…’” Leaving this brief but amusing explanation of his introduction to design to one side, he continues. “I decided to study at what’s now the American University in London. I considered both architecture and interior design, and decided interior design was better; firstly, it was quicker, and secondly, I found it more interesting.” 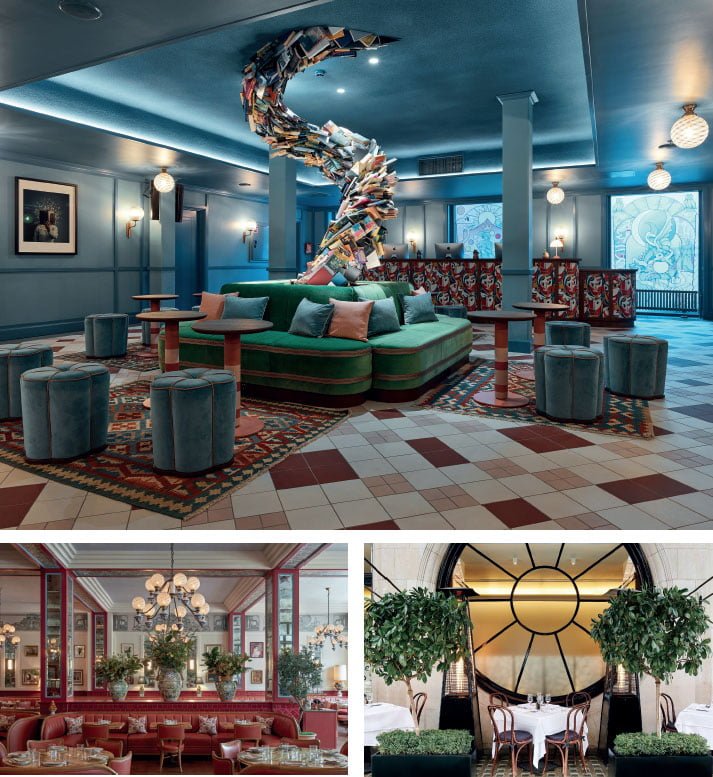 Out of university, his formative years as a designer were spent working alongside London’s leading design luminaries, including his former teacher Philip Michael Wolfson, gallery owner David Gill, and the late David Collins, before launching Martin Brudnizki Design Studio (MBDS) in 2000. Now in its 22nd year, their portfolio reads like a hospitality wish list of the world’s most desirable destinations. Bars, clubs, restaurants, and hotels dominate his world, but having seen images of his newly renovated Sussex home, I wonder if it sparked a temptation to visit residential design. 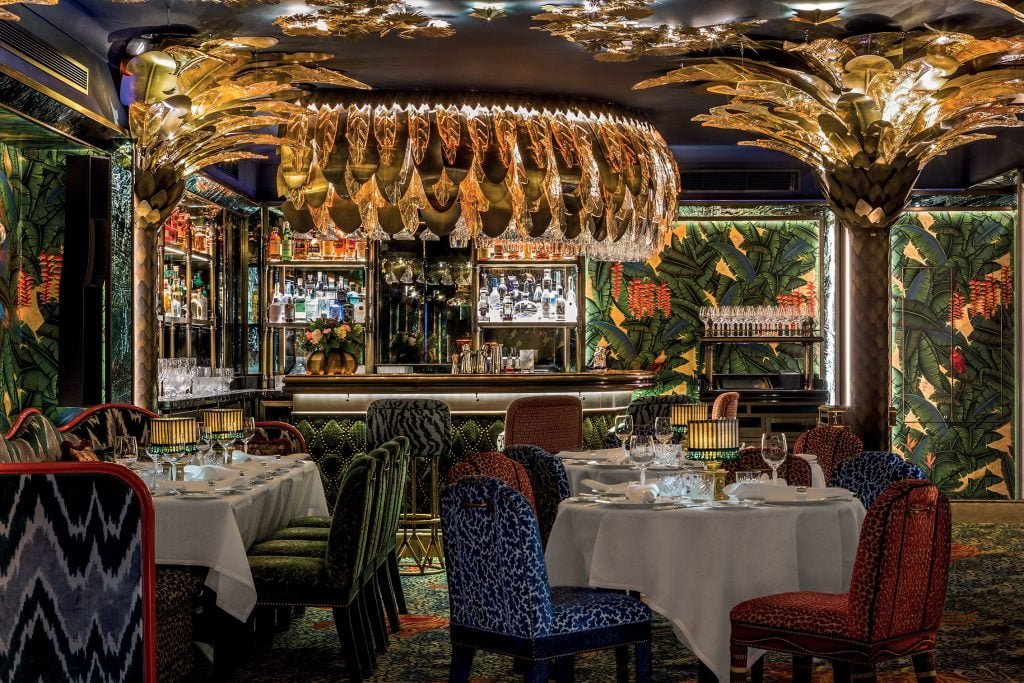 Above and below photos by James McDonald 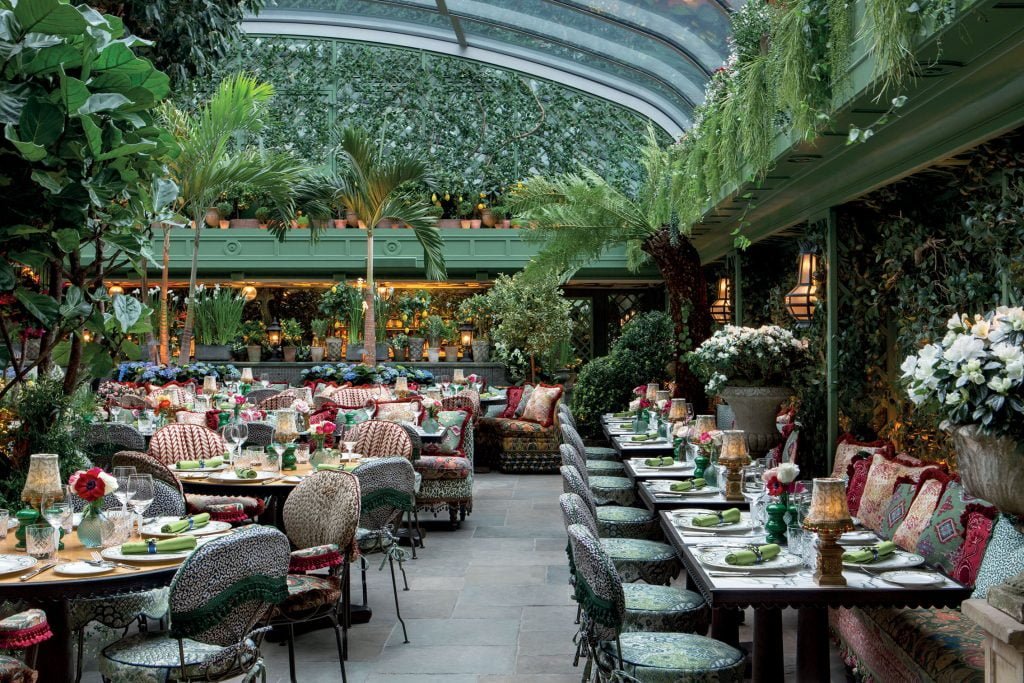 “In the beginning, it was 50% hospitality and 50% residential design, but I always enjoyed hospitality because of the space, the psychology and also because the projects have a stricter beginning and end – and residential is so much more emotional,” he adds as an afterthought. “Then for many years I would only do hospitality, until about four years ago when I started doing residential again and now I have a specialist residential team. But this time it’s on a completely different level – as in extremely high-end.” To illustrate just how high-end, he says, “We have only just finished a project we started four years ago, and it is extraordinary. But that’s how we work now!” 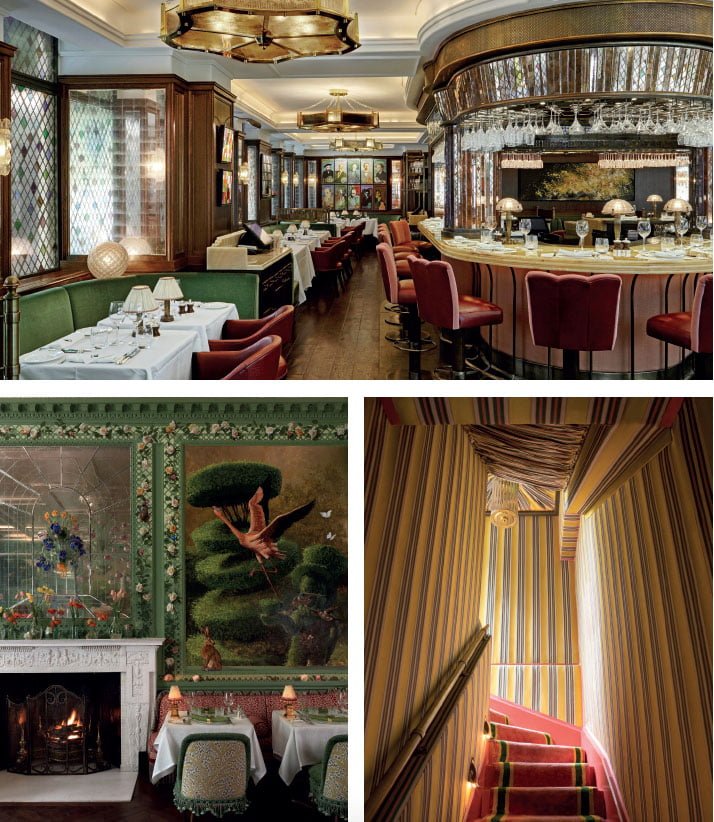 Knowing better than to ask him what the projects are, I ask instead about his studios. “We have two studios – in London and New York and are hedging towards a team of 100 designers across both.” The teams include architects, interior designers, lighting and product designers, as well as art consultants.

With hospitality design still taking the lion’s share of the focus at MBDS I ask Martin which jobs he considered pivotal to his design career. “I always believe that some things happen that lift your business up, and this is how you grow. For me, there were three such moments. The first was in 2006 with Scotts. It was the first high-end hospitality project we did, where people could really see what I could do. It was the second oldest restaurant in London and Caprice Holdings wanted to revive it. Until then I had been doing restaurant rollouts, including Strada, Cote Brasserie and Jamie’s Italian. The next lift was in 2009 when I did Soho Beach House in Miami, which basically got me noticed in America. The third one was Annabel’s in 2018, which again showed not just what we could do, but also how we had evolved.”

The mention of Annabel’s elicits a smile from Martin, and he appears as passionate now about the project as he did when he showed a small, excited press group around the Grade 1 listed Townhouse. With its leather embossed walls, clashing prints, hand-carved onyx sinks and Murano chandeliers it had the working title of ‘The spirit of English eccentricity.’ Here Martin and his team took bespoke to a whole new level. By anyone’s standards, Annabel’s is a joyous showstopper. “We wanted to create a club that was different from anything else that exists in London. It’s really about fantasy – this is a club, you don’t come here for reality, you come to be transported somewhere else. You come here to feel glamorous and have a great time,” he added. And four years on it still holds up, in part because any imitations – of which there are many – stand out as precisely that. 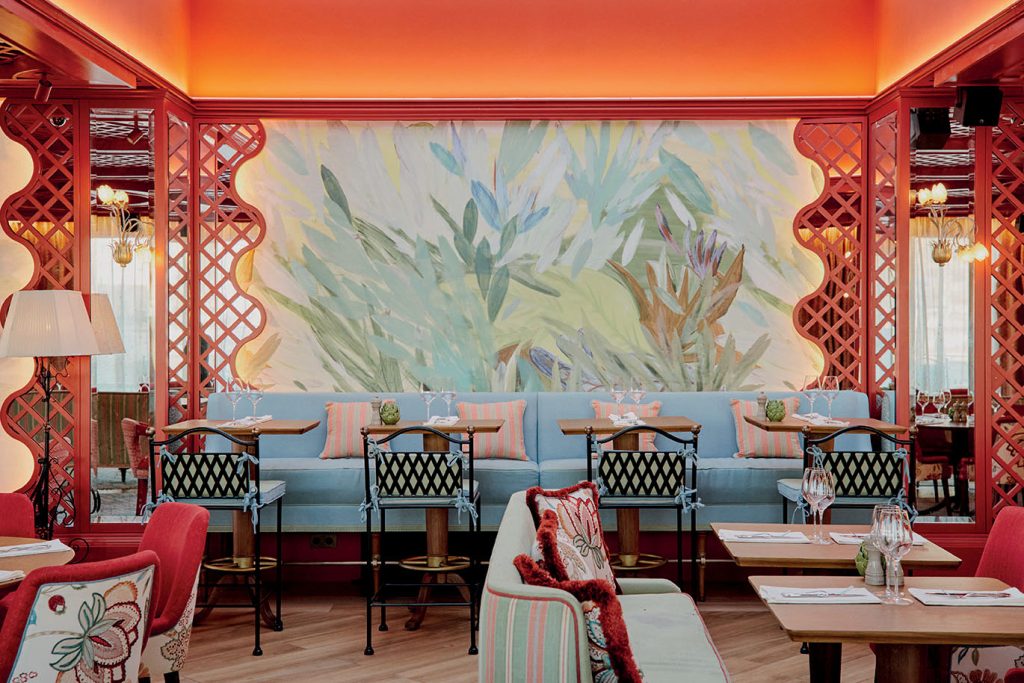 Looking at the MBDS portfolio is interesting. It isn’t all an extravagant feast of maximalism. There are hotels with a pared-back classicism, some are serious and grown up while others ooze a decadent charm. There are often surprising elements hidden within, but they always feel honest with a strong sense of history. I ask Martin how he thinks his aesthetic has changed over the years.

“It’s interesting,” he begins, “I always said that early in my career I took the minimalism path, and then later it was the maximalism path, then modernism, then classicism… these are the four pillars as I call them. To understand the future, you need to understand the past and I think the past should inform us about what we should do. I have worked on projects which have been informed by one of those pillars, but now I pick from everywhere and sort of mash things together. Basically, I look at designs through all four pillars. There are no rules.”

I wonder what his favourite part of a project is. Without a moment’s hesitation he says, “When it’s finished!” and follows it with a burst of laughter. I was happy to leave it there – he was pretty convincing, but he quickly puts himself in check. “You know, I enjoy the whole thing – every part of the process. I involve myself very much at the beginning – the narrative, the concept, and the psychology of a design. I do the layout of the plan, and then my team will take over and put together the formation of it, with the drawings which I then go through and check.”

Considering the layers and complexities of so many of MBDS’s projects, coupled with the understanding that the studios are working on 20 to 30 projects at a time, I’m interested in how a design is successfully brought to completion. “The whole process is designed to ensure there is only room for 2-3% error. The way we work with the team has been refined with different stages of checking things, to make sure that when it comes to the installation it’s actually going to work. We do a lot of prototyping. Yes, we’ve done the design and the drawings but if we leave it at that and pray to God it’s going to work out, then it’s going to fail.  We produce prototypes for every single piece; sectional and full, we check the height of every table, every chair – and only when every single piece is correct, and the client signs it off is it considered done.”

Launched in 2015, And Objects is a product line created with Co-founder and colleague Nicholas Jeanes. I ask Martin to share a little more about the intent behind the collection.

“Well, I always wanted to do product, but knew I had to have completed enough projects first, so it could segway into the product line. In the beginning, Nick and I started slowly putting together ideas and thinking about what it was we wanted to do. We then thought about collaborations with other brands and who we would like to work with. Finally, we had to look at the production process and be certain that we found crafts people who were capable of creating the detail of the designs.”

This last sentence cannot be underestimated. The attention to detail is flawless, and the finish throughout the collection is sublime. And Objects embraces the role of the craftsman – the metal workers, the upholsters, the carpenters, and engineers – in a way that is rarely seen, understanding that without their extraordinary talents, their designs can’t exist.

The designs however are exquisite. They are bold, occasionally whimsical and rich in historical references from all four pillars. To quote the website they ‘straddle the gap between functionality and beauty.’

With an ongoing list of projects in progress, in the pipeline or about to be unveiled, Martin’s reputation as ‘the man behind the world’s hottest interiors’ goes unchallenged. At first, talking to Martin feels slightly at odds with his interiors. He comes across as business-like and serious, and his conversation is focused and precise. But that quickly gives way to infectious bursts of laughter and instantly you are reminded of the joyous layers and curated frivolity of his interiors.