Recognising a gap in the market is a recurring theme for property doyenne Naomi Heaton. Having now turned her attention to hospitality she talks to Emma Kennedy about creating a home from home with the launch of her latest venture, The Other House.

When real estate investment company London Central Portfolio (LCP) and Dutch-based investor APG announced the acquisition of Harrington Hall hotel, in London’s South Kensington, my ears pricked up for a couple of reasons. Firstly, because I remembered the handsome hotel only too well from my childhood and had nostalgically observed its gentle decline in recent years, and secondly because the woman behind the acquisition was Naomi Heaton. Though known for her outstanding success as a property developer, to the best of my knowledge she wasn’t a hotelier—until now that is. 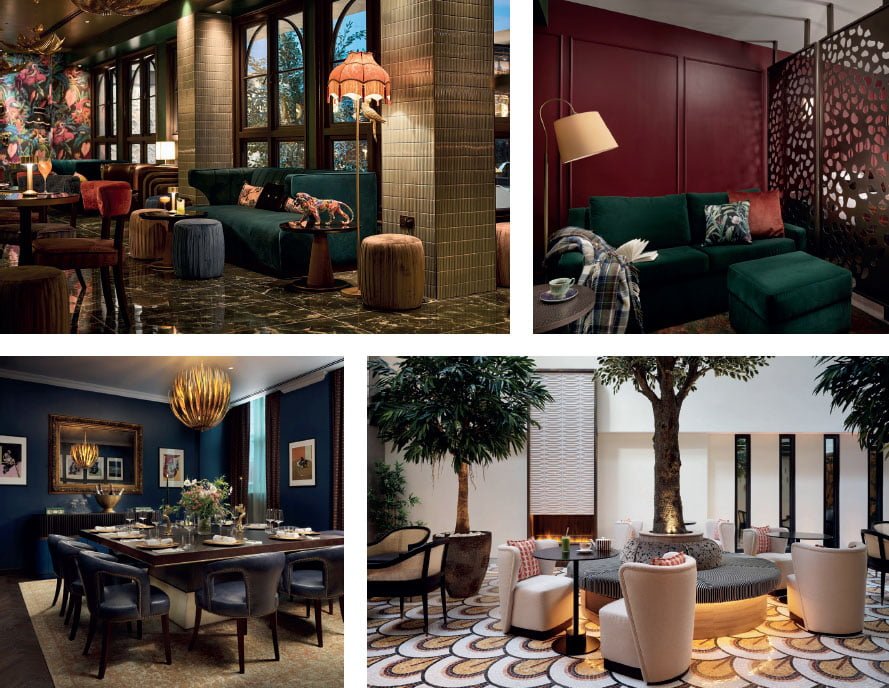 Heading west along Harrington Gardens, an impressive terrace of 11 townhouses is now home to The Other House, the newest addition to London’s hospitality scene. Stepping through the entrance into the lobby, the welcome is lively, the vibe is relaxed, and first impressions are, well…impressive! But as intrigued as I am to see the hotel, I am equally as intrigued to meet my host and interviewee, Naomi Heaton.

I’m shown through to a round table in the window of The Other Kitchen, an all-day street café and as I play hunt-the-notebook, Naomi whooshes through the door and introduces herself. Fitting in well with her glamorous surroundings, she cast’s an all-seeing eye around the restaurant. Apparently happy everything’s in order, she orders our coffee’s and joins me. 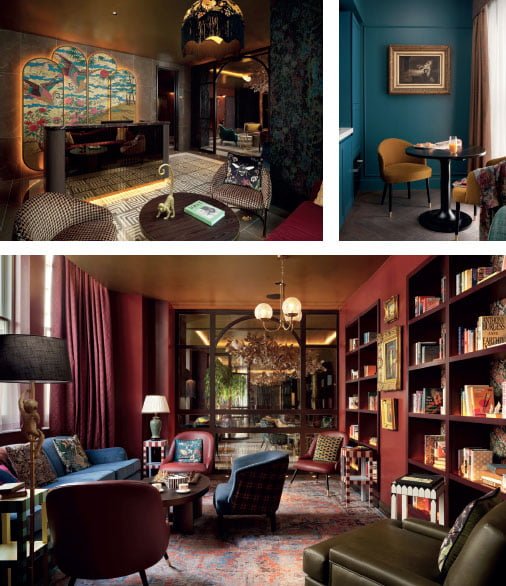 Clearly at home in her new role as a hotelier, I begin by asking Naomi what prompted the shift from real estate to hospitality… and why now? What followed was a quick but concise lesson in the London property development market as she mapped out her journey to date.

“Originally, I was in advertising – a Director at Saatchi’s” she casually throws in, “but my passion was buying, doing up, and selling residential properties. Before long, I could see a market opportunity to help investors invest—until then there had been estate agents acting for sellers, but no one acting for buyers and investors, and I knew I had the experience to pass on to others. I started by helping people to buy, renovate, and decorate their flats, and then if they wanted to rent them, I would help with the letting and management side.”

Launching in 1990, LCP was a one-stop service in the private rental sector (PRS), which as Naomi explained was another ‘first’. “Until then it was only commercial property that had been seen as an appreciating asset. As we were focused in the PRS, over the years I could see how the tenants’ requirements were changing. Today, in prime central London, which is where we are, 75% of the market rent one and two-bedroom units—they don’t want the mega houses anymore.” I ask Naomi when this change came about, and she is very clear. “It was in 2001, after the 9/11 attacks. Overnight the Americans stopped coming, followed by corporate belt-tightening, where budgets got redistributed and tenants had to go for smaller units. We saw the demise of the three-bedroom flat, followed by the beginning of a demise of the two-bedroom flat, and of course all the time property prices were going up. In response to this shift, we started to acquire smaller units and our portfolio predominantly comprised one and two-bedroom properties. As the trend for smaller flats continued, I could see the importance of interior design. Suddenly everything had to look better and better, from the furniture to artwork through to bed linen. People were looking for a show home, right down to the table being laid for dinner —we needed to create an aspirational lifestyle.” 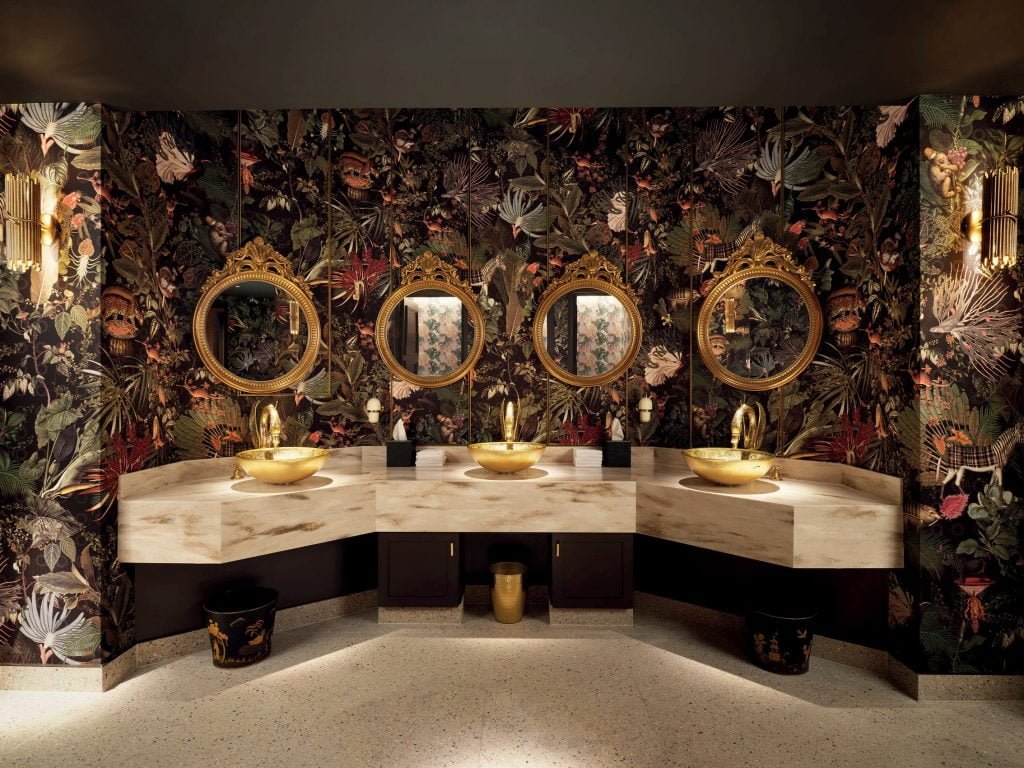 Having elevated the interior design of their properties to meet their tenants’ aesthetic expectations, Naomi then recognised changes in tenants’ experiential expectations. “What we then started to see was that tenants weren’t prepared to wait for anything—they wanted service on demand, accessible through a digital experience.” Pausing for a moment, Naomi concludes; “So, I looked at all that, looked at our portfolio and thought well really, we are renting out a bunch of hotel rooms. What people wanted was to have the ‘midway’ lifestyle, and I thought, so why don’t we give it to them? And that really was the seed of the idea.”

Looking closely at the hotel sector to see exactly what was on offer, Naomi soon saw that in basic terms there was either the traditional hotel or the long-stay apartment—neither of which offered a guest a sense of belonging. “When we considered our tenants, we could see they were benefiting from being part of the local community which we felt was important. The Other House needed to be an amalgamation of hotels, serviced apartments and residential, with a sense of community and belonging.”

Fast forward eight years, and the finished result is quite an achievement. The concept has been approached with fresh eyes and does offer something different. Classing itself as a Residents’ Club, it has been shaped through a residential lens, rather than a conventional hotel approach. The original hotel interiors have been completely renovated to offer private meeting and dining rooms, and interesting event spaces. Its Private Club for residents includes two bars, a screening room, and extensive wellness and wellbeing spaces, including a vitality pool, a state-of-the-art gym, and a meditation hub. And for that all important local vibe there is an all-day street café, The Other Kitchen, and a signature cocktail bar, The Owl and Monkey. Accommodation comprises over 200 Club flats of varying sizes and configurations; from studio-style flats to three-bedroom apartments, and for larger groups there are Club Combos with options to interconnect two, three or four Club Flats all behind a single front door or around a private internal courtyard.

Working closely with interior designer, Marie Soliman of Bergman Design House (featured on page 146), the overall aesthetic of the public spaces is definitely ‘more is more’ with a fabulous sense of fun. It’s theatrical with layer upon rich colourful layer of textures, opulent wallpapers, and bold colours. Gold and brass vie for attention, glinting underfoot on mosaiced floors and hanging overhead from ceilings. Exotic animals peer out from painted screens, and brass swans spout fountains of water into golden sinks. The inspirations behind the different areas appear to be endless, as they transport you across continents and back through mythical landscapes. The fun feels infectious and looking around me on a dull Tuesday morning in October, The Other Place had a distinct party air about it, with the promise of more to come.

Taking the gold lift to the floors above, we arrive in a rich red corridor. Floors and apartment numbers are replaced with street and place names. While the palette of each space is taken from and in keeping with the public spaces downstairs, the whole tone is much quieter. Still rich and opulent, they are well-designed, calm spaces. Entering straight into the living area as opposed to the bedroom is a key difference when compared to a traditional hotel. The kitchenettes are good-looking and generous enough to self-cater—but personally, I suspect the temptation to return to the heart of the Residents Club will outweigh the desire for a quiet night in.

While The Other House offers a premium service to those who want it, with staff on hand to engage and deliver as required, the fully integrated digital experience was always at the forefront of the project and quite literally everything is available at the tap of a screen. Beyond the usual functions one would expect from a hotel app, it has a vast array of features, that are really quite useful, like checking to see if the bars are busy, getting notifications that your Deliveroo is on its way and even checking the energy consumption at The Other house… the list really does go on!

Looking around me, the guests are a diverse bunch, and though The Other House has only been open for four months, I ask Naomi if the guests align with what she imagined they would be. “Yes, I think so, they are completely global, which I always thought they would be. I also thought there would be a stronger Asian demographic but of course, Hong Kong is still difficult. We’ve had a lot of guests from America and the Middle East, who in particular like the long stays. But what is interesting is that already we have guests extending their stays and making repeat bookings. The aim is to get a balance of short-term and extended stays, that’s the challenge.”

Launching The Other House onto the London hospitality scene was never going to be a job for the faint-hearted. Throw into the mix someone who doesn’t have a background in hotels, and a pandemic to contend with, and you’d be forgiven for thinking it was madness. But the results speak for themselves. Naomi’s attention to detail as we walk through the property is a constant; from checking a delivery to straightening a painting, to noticing a guest in reception who appears to be looking for someone. She is clearly thriving in her new environment, so much so that she has another two London properties in the pipeline; one which is well underway in the seven property Wellington Block, Covent Garden, slated to open in 2024, and another one in Belgravia. “Obviously London is a market I know, but this is a global brand, and we are now looking at New York, Singapore, a European capitol and even India…”

Having spent barely an hour in her presence I have no doubt that under Naomi’s leadership The Other House will succeed. Apart from the fact she does her research and leaves nothing to chance, she also has a knack for spotting a gap in the market. But over and above everything, I seriously don’t think failure would ever be an option for Naomi Heaton.

Read the full review of The Other House at hotelspaceonline.com here 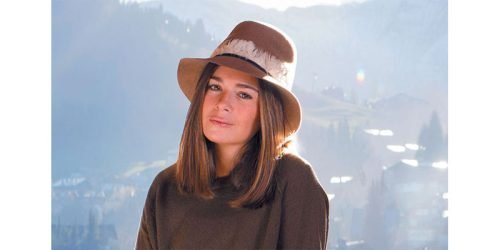