From hotels to superyachts, DKT Artworks create site specific artworks and installations across the globe.
Emma Kennedy goes behind the scenes with Sean Trowbridge to see the bigger picture. 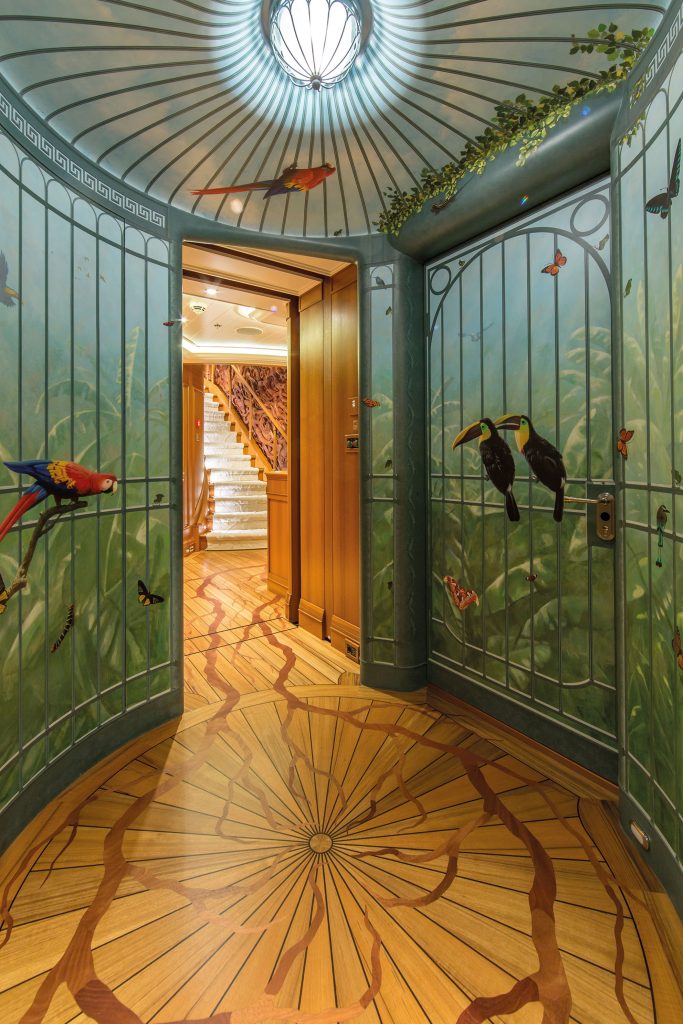 We’ve all been there. The whisper of a new hotel, followed by snippets of industry gossip and then the buzz of anticipation and speculation as to who’s talking to who with regards to the design. By the time we get to cross the highly polished threshold, we are hungry to see if the finished result lives up to the hype and indeed our expectations.

Soaking in the overall design, we cast a critical eye as we consider colours, textures, and often bold design choices – and all the while crediting the designer. But how often do we stop and wonder who is behind the physical creation of what we are looking at? Seldom acknowledged and less frequently named are the craftspeople and artists responsible, without whom, the finished result would be something entirely different, and without a doubt less interesting. What’s more, they too are often unable to share their triumphs as are frequently tied into NDAs, and so the artistic anonymity continues.

Behind many of these decorative finishes, from triple height staircases adorned with bas reliefs, to murals resembling a restoration project is DKT Artworks, a multidisciplinary team of imaginative and highly skilled artists.

Their story began in the late 1970s when three friends; Sean Trowbridge, Steve Keeling and Niki Davies, joined forces and undertook some general painting and decorating work. Inspired by Steve’s father, who’s thorough training as a painter and decorator had involved learning traditional paint techniques, their art school backgrounds came to the fore as they began to experiment with paints and glazes. When the resurgence of decorative painting took the interiors world by storm in the late 80’s, they were well placed to deliver finishes that often superseded the talents of their competitors and the expectations of their growing client base. As their skillset grew along with their reputation, modest residential commissions made way for larger commercial projects and the incarnation of DKT Artworks was formed. 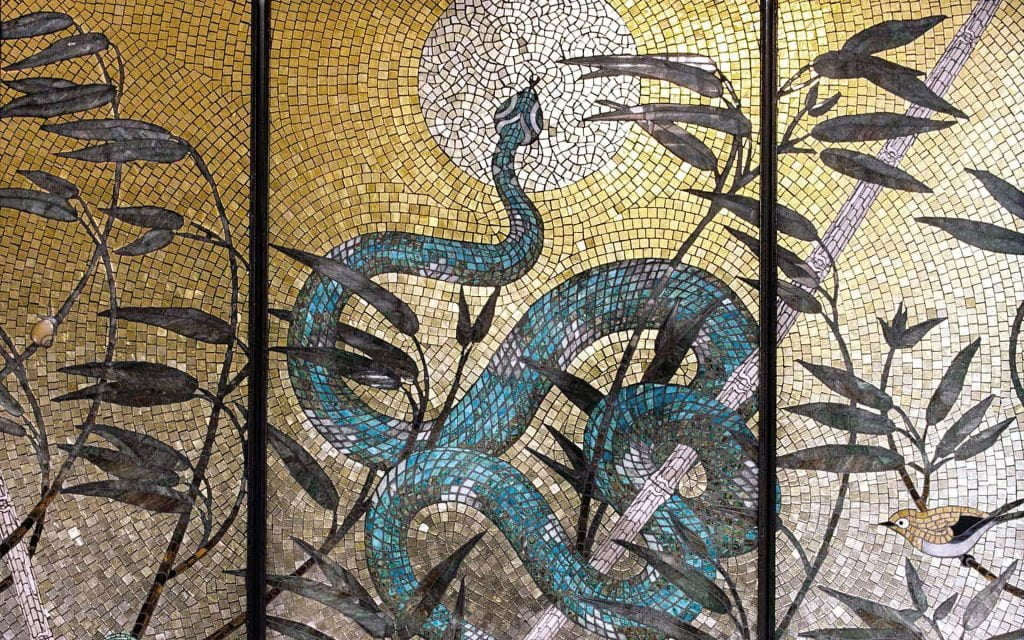 Curious to discover who’s behind this creative collective I head off to meet co-founder Sean Trowbridge at their studio in Balham. The large industrial unit they now call home, is a far cry from the garage in North London, where they first set up shop in the 80’s. A short corridor opens into an Aladdin’s cave, bursting with canvases, sculptures, plasterworks, mosaics, and murals, at every turn. Some are finished pieces, ready to be shipped off to locations dotted around the globe. Others are works in progress. It’s surprisingly organised, with artists working in their own clearly defined space. The atmosphere is focused but relaxed, and I resist the overwhelming urge to wonder off and discover what’s around each corner, and just pray there’ll be the promise of a tour after the interview.

In the interest of transparency, I too was a decorative painter in a former life. Like most of my peers, I was self-employed, moving from site to site working on a wide variety of commissions in myriad locations. There was no shortage of work but securing a place on the interesting projects was key. I loved the work, but like many of my female contemporaries soon discovered the travel and hours often involved proved incompatible with raising a young family. 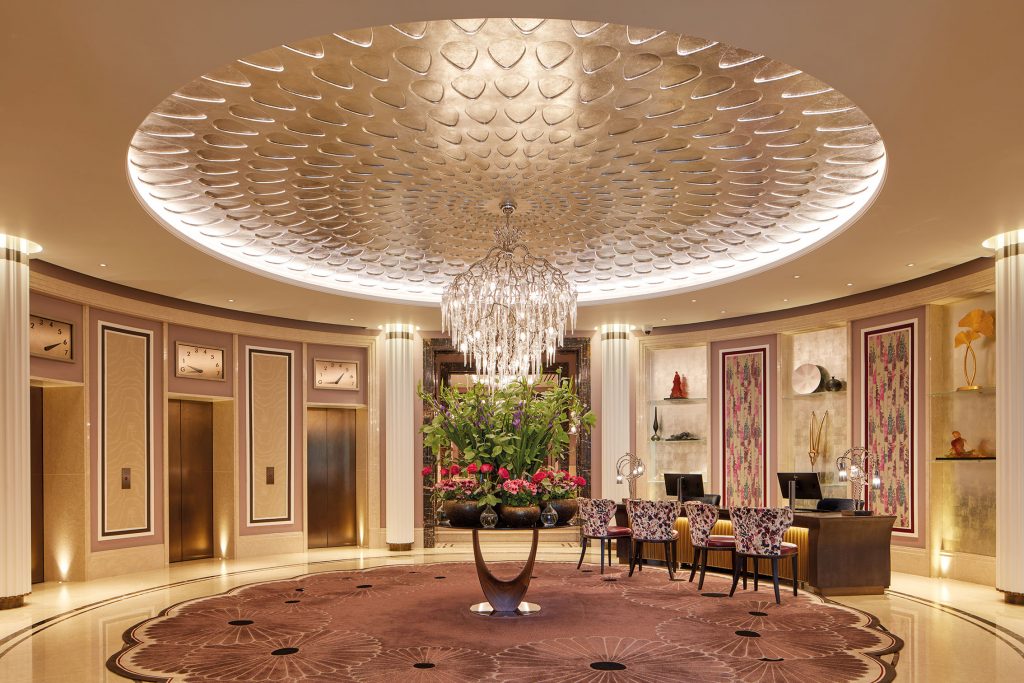 With a permanent team of talented artists working for DKT Artworks, I begin by asking Sean how he and his partners had the foresight to see the bigger picture and form a company on this scale?

‘’A lot of decorative painters at the time were just passing through. There were a lot who were artists, earning money over a short period as they were waiting to get a show, and others who just went with what was fashionable. We had a vague idealistic notion, that we could produce our own finishes and be a bit pushier about the things that we wanted to do. So, when people came to us and asked if we could do some rag-rolling, we would say “we can, but are you sure that’s what you want because look at what else we can offer.” We put together a comprehensive portfolio of finishes and sometimes they would decline and insist on the rag rolling, but over time people started to stick their necks out and commission something new – and it really evolved from there. If you’re in it for the long run, you don’t want it to get boring. When clients asked if we could do something we were unfamiliar with, we always said yes and would go away and work out how to do it. As different projects came in, we would hire fresh talent, and worked on the principle that to keep someone, you must keep them in work as much as possible. When there wasn’t enough work, we would ask them to do more samples, and so we were always creating something new.” 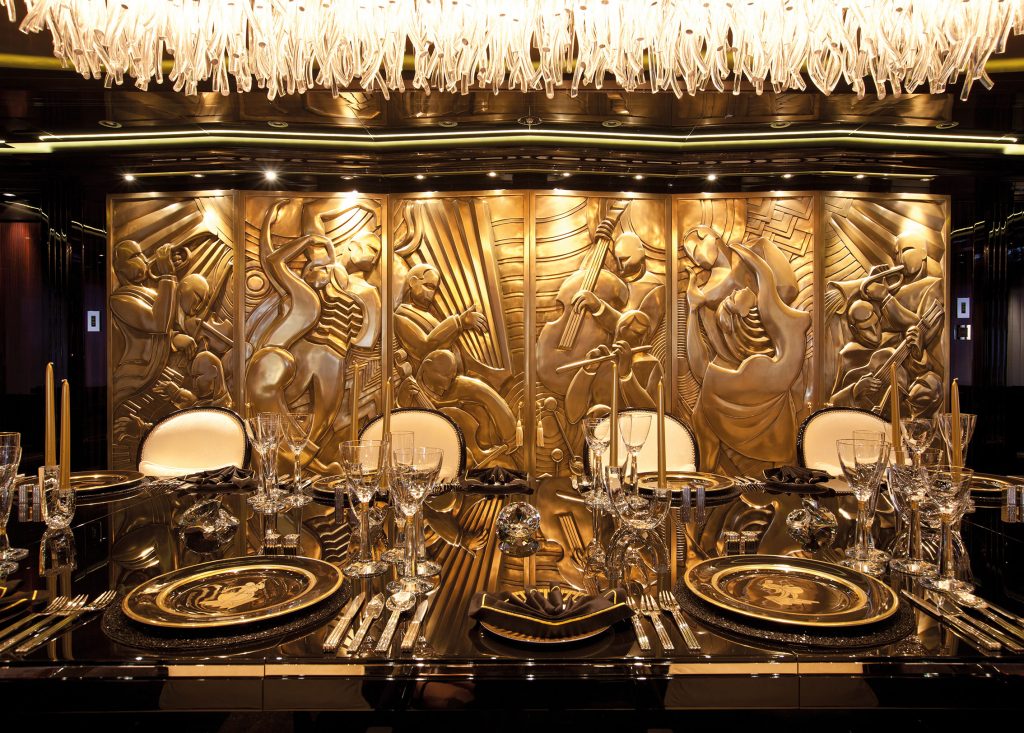 Their early commissions were mainly residential, but it wasn’t long before they won their first London hotel in 1981, the former Royal Court – now the Sloane Square Hotel.

“We began by doing some wood graining in the strangely named ‘Old Poodle Dog’ restaurant, and when they came to renovating the entire hotel, we were brought back to grain the whole of the reception. This meant we needed to hire a lot more people to work with us, but to pay them we needed a bank overdraft. We went to the bank and asked for a very modest overdraft and were faced with a ‘Captain Mainwaring’ style bank manager, who looked confused and promptly turned us down. Undeterred we went over the road to the next bank, and they fortunately agreed, otherwise we didn’t know how we could fund the job.”

From this first hotel, more followed, including The Goring hotel, The Biltmore, The Sanderson and Admiralty Arch. Then there were restaurants, bars and shops, and a host of private yachts and cruise liners including the Queen Mary. Looking back to the 1980’s, when the city opened up, there was a steady flow of commercial work which was a constant until the crash in ’92. As with most things in life, decorative paintwork is subject to trends, and I ask Sean if he recalls which finishes were in demand at that point.

“Verdigris” he says without hesitation. ‘’Everyone was after Verdigris walls. Interestingly, prior to this sudden trend, I had been working on a commission for a New York project, where I had seen quite a lot of it. I soon realised, that whatever was happening in New York, would arrive in London about two years later. Once we had figured that out, we could often anticipate what clients would be looking for next. Polished plaster was also becoming popular and we soon realised that we needed to learn how to do it ourselves. Everything we do has been self-taught. At the moment, the flavour tends to be for more subtle work, lots of quieter finishes. When you go through a subtle phase, it’s certainly more tasteful, but not nearly as much fun to do!”

Since its inception, DKT’s skill portfolio has developed broadly, from paint finishes and stucco to verre églomisé and antique mirrors, from gilding to intricate bas reliefs and mosaic work, and the results are extraordinary. Most of their commissions come through interior designers, who Sean is quick to acknowledge are very important. “They have an insight into their clients likes and dislikes that we don’t have. But occasionally there will be a guarded feeling that they want to be regarded as ‘the creative’.  If we present ourselves as being too creative, which isn’t meant to be in any way arrogant – I then have to be clear that we are simply offering a service. Steve and I have always been idealistic and love the idea of collaborations, always seeing ‘the whole being greater than the sum of the parts’ – and so sometimes it is disappointing when we see our work in magazines only to realise that we haven’t been credited.

Collaboration is the cornerstone of DKT Artworks, and without it, it simply couldn’t exist. They currently employ 30 artists, all of whom have their own area of expertise. But with the high volume of projects passing through the studio at any one time, they will often be called upon to assist as part of a team focused in an area outside of their own. “Many people are fantastic at working on their own and don’t like collaborating – but that’s no use to us. Our teams need to communicate and share their skills with one another.”

The team are diverse and multi-cultural, with backgrounds that include television and theatre, fashion, jewellery, building, conservation, and restoration. I notice with interest that several have been working with DKT Artworks since the 90’s and one who began his career by training with them in 1988. There are few testaments to a company’s culture that speaks louder than the longevity of its employees, and so it isn’t surprising Sean speaks of his team with well-deserved pride.

It’s a given that we all want recognition for our creative endeavours, but perhaps we could all be more generous in our support for those who have helped bring our vision to life. After all it can only add to the picture.