Sonu Shivdasani, Founder and Chief Executive Officer of Soneva resorts, and Founder of Six Senses Hotels Resorts Spas, has been honoured as an Officer of the Order of the British Empire (OBE) for services to tourism, sustainability and charity in the King’s New Year Honours 2023 Overseas and International List.

Born in England, Sonu is an alumnus of Eton College and a graduate of Oxford University. It was during his time at Oxford that he met his Swedish-born wife Eva and together they fell in love with the Maldives. Their first resort, Soneva Fushi, opened in 1995 in the Baa Atoll with a novel concept that blended luxury hospitality with environmental responsibility. The original ‘castaway’ resort went on to redefine tourism in the island nation.

In the same year, Sonu and Eva launched Six Senses Hotels Resorts Spas, followed by the Evason hotel group in 1997, with several landmark properties across Southeast Asia and Europe. In 2012, management contracts for both companies were sold as part of Sonu and Eva’s ‘One Owner, One Operator, One Philosophy’ strategy.

“Receiving an OBE is an incredible honour and I share it with all of Soneva’s friends and family. This recognition reinforces our founding vision, which is placing purpose over profit,” explained Sonu Shivdasani, Founder and CEO of Soneva. “We believe that true luxury is about time well spent, so we strive to make every moment memorable for our guests without losing sight of our intention to contribute to communities near and far and protect our precious planet.”

Soneva has long championed greater environmental accountability in the hospitality sector and beyond. Its resorts – Soneva Fushi and Soneva Jani in the Maldives, and Soneva Kiri in Thailand – are all carbon neutral with a 2% environmental levy added to every stay. These proceeds go towards the Soneva Foundation, a not-for-profit UK-registered trust that helps offset carbon emissions and funds purposeful projects around the world. These include offering fuel-efficient stoves to vulnerable communities in Myanmar, forest reforestation programmes in Mozambique, re-introducing endangered hornbills to Thailand’s Koh Kood Island, setting up coral nurseries in the Maldives and more.

Soneva Namoona, an independent Maldivian non-governmental organisation (NGO), also receives funding from Soneva and the Soneva Foundation for key initiatives that help phase out single-use plastics, improve recycling efforts and inspire the next generation of environmental stewards in the Maldives.

About Soneva
Founded in 1995, Soneva is an award-winning sustainable luxury resorts operator. At Soneva Fushi, Soneva Jani and the Soneva in Aqua yacht in the Maldives, and Soneva Kiri in Thailand, true ‘luxury’ is defined by peace, time and space. Guests discover the SLOW LIFE, reconnecting with themselves and the natural world through rare, unforgettable experiences.

Soneva is a pioneer for responsible tourism, combining sustainability with exquisite luxury and intuitive, personalised service. Carbon neutral since 2012, Soneva launched its Total Impact Assessment to measure its social and environmental impact in 2016 – a first for the hospitality industry. A 2% environmental levy is added to every Soneva stay, with proceeds going towards the not-for-profit Soneva Foundation to offset carbon emissions and fund purposeful international projects. 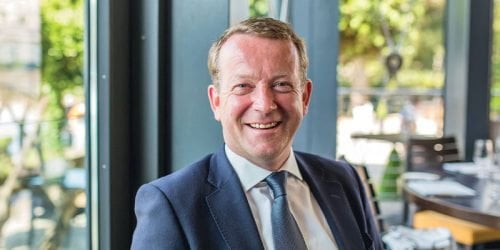 When Harbour Hotels were looking to expand, Mike Warren was an obvious choice given his success deve...