Daring and eclectic, Ace Hotels’ first location in the southern hemisphere stands out from the pack.

Ace Hotel Sydney is a sweeping re-imagination of a historical building that has stood for more than a century. When the hotel opened earlier this year, eight new floors had been added to the building, which now rises 18 stories, and includes 257 guestrooms, a lobby bar, ground-floor restaurant and cafe, as well as a rooftop restaurant and bar.

The site of Ace Hotel Sydney is home to Australia’s earliest kiln discovery, dating back to the 1820s, when convict potter Jonathan Leak and his wife, Mary, set up base on Wentworth Avenue to produce domestic pottery. The hotel seamlessly weaves its nods to the past into modern flourishes, showcasing an extensive art program that includes works of all sizes by some of Australia’s most daring new voices in art. 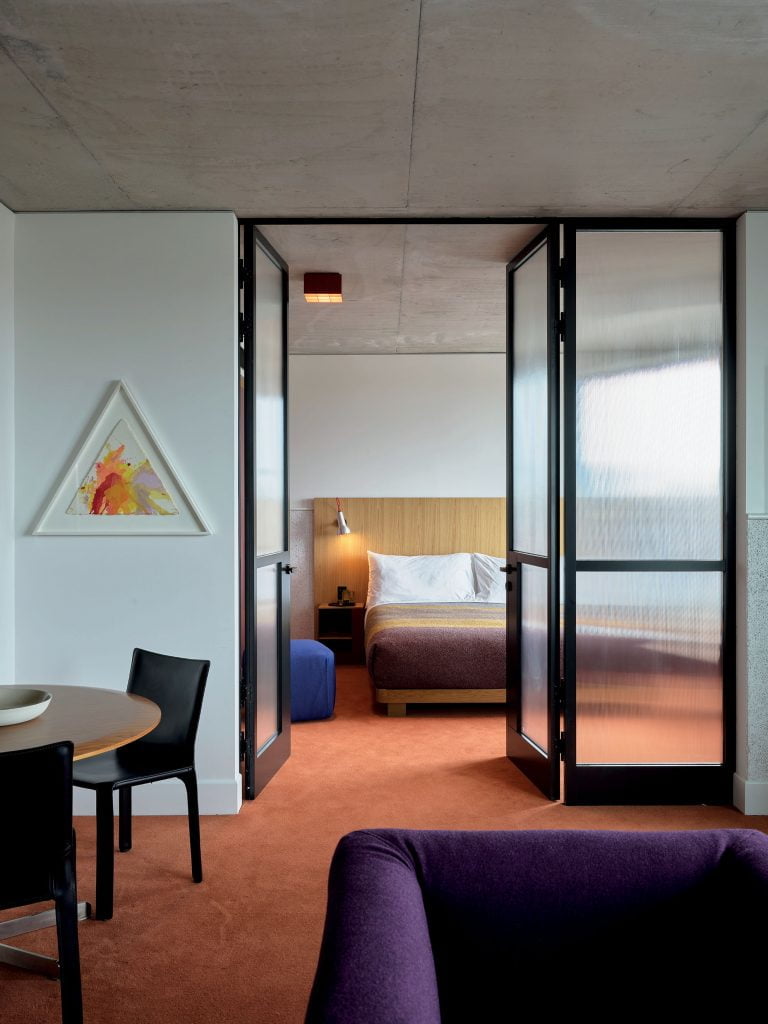 The use of raw materials throughout the design, such as the textured concrete walls, locally sourced timber and aged brass, honour this historic site while creating comfortable communal spaces. The materials throughout the hotel’s interior speak to Sydney’s landscape and natural resources, with terracotta tiles in the guest rooms, sandstone feature walls on the ground floor and an ochre-red marble staircase. Classic materials — oak, brick, leather, raw concrete, steel, marble — applied in inventive ways merge the historic with the cutting edge.

The hotel’s wayfinding and signage were designed by Studio Ongarato, with an emphasis on 1970s modular design, textural materials and bold geometric forms. A sense of handcraft is present in carved timber blocks, glazed ceramic room signs and hand-painted details on the entry signs.

Ceramicist James Lemon was commissioned to create the hotel’s reception desk from, polychromatic glazed brick in recognition of the site’s industrial past and its dynamic new life.

Floor-to-ceiling windows illuminate the lobby lounge – a common space open to the public, activated by music, art and industry. The lobby’s glass frontage gives a bright, airy feel to the space, which is framed with sandstone walls and lush foliage. Reclaimed brickwork, warm terracotta, tans and greenery are continued throughout the floor, inspired by Australia’s native landscape.

The lobby features a marble bar, with stools designed by Flack Studio. The sunken lounge, which sits in the centre of the room, is another wink to 1970s Australia, inviting guests to sink into conversation among pleated tan leather cushions. The vibe is echoed in the guestroom design, with most featuring an inviting nook in which to recline. A work by renegade ceramic sculptor Ramesh Mario Nithiyendran watches over the space. 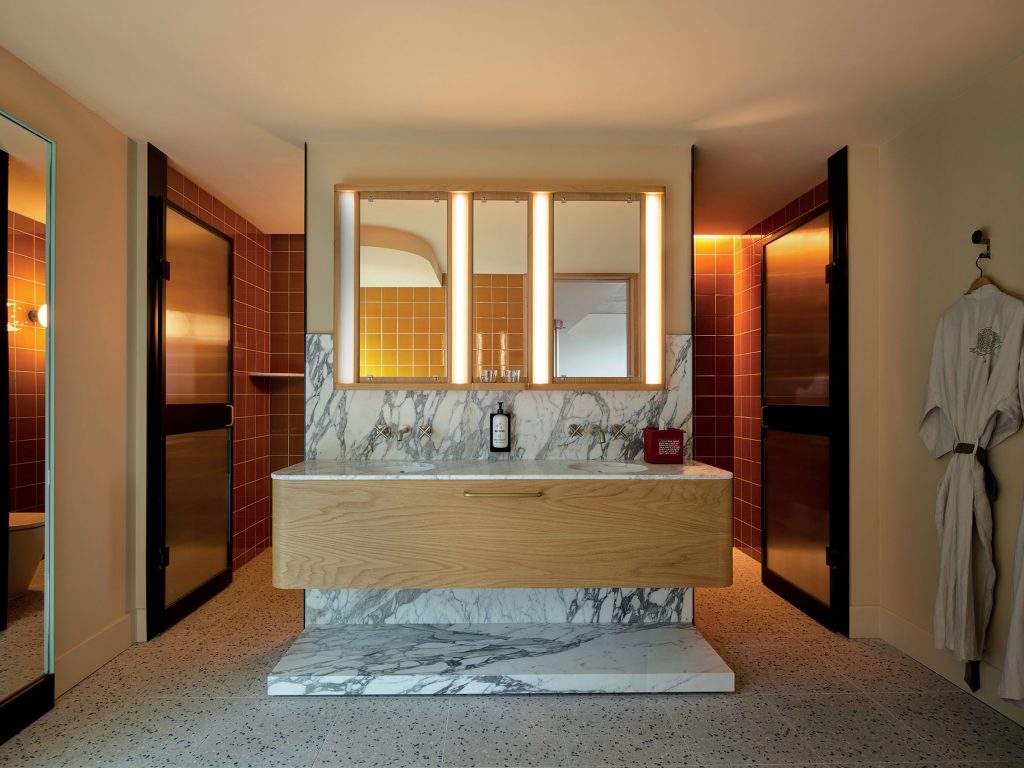 To the left of the marble staircase ascending from the ground floor to the level-one event spaces is Julia Gutman’s large-scale tapestry, Once More, with Feeling, made from clothing previously owned by Gutman and her friends. At the landing is a commissioned painting by the Perth-based artist Joanna Lamb – one in her on-going series of paintings of suburban swimming pools. 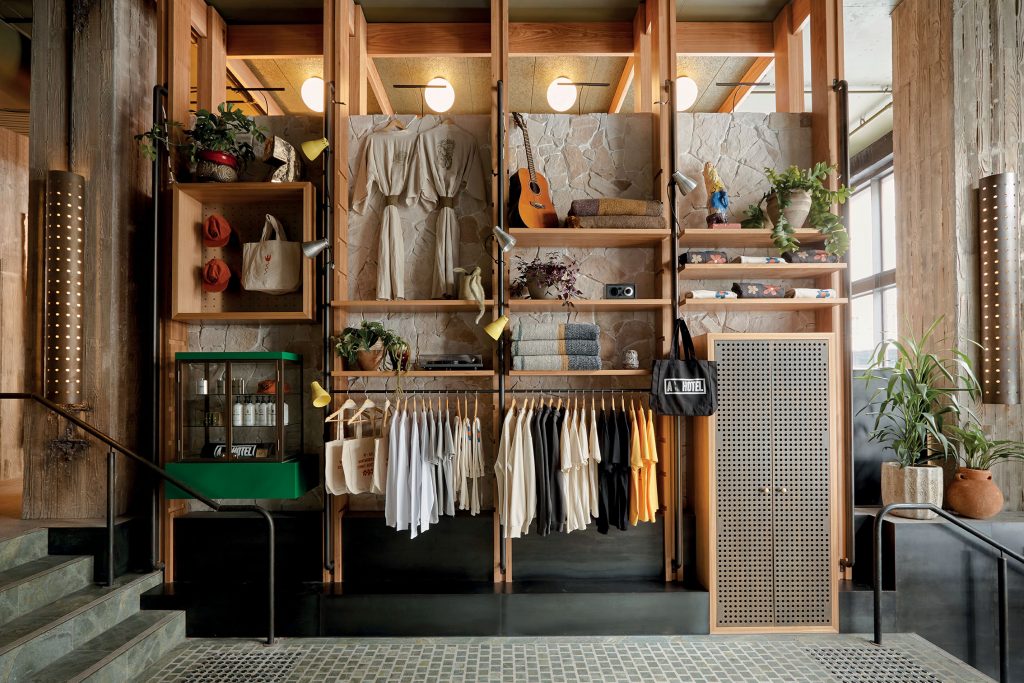 Nearly all the furniture and lighting in the hotel is custom-designed by Flack Studio and its collaborators – from the banquette seating to the beautiful sconces. Iconic modernist designs include lighting by Isamu Noguchi, Tobia Scarpa’s Nuvola lamp and select vintage chairs. In keeping with the building’s design, the materials are raw yet refined, with a modern edge – armchairs and stools of oak accented with green velvet or black leather, marble tabletops and linen lampshades.

The hotel is home to four venues for eating and drinking, including LOAM an easy-going place to grab a quick bite, which features a commissioned earthenware mural of glazed wall tiles by iconoclastic ceramic sculptor Glenn Barkley. 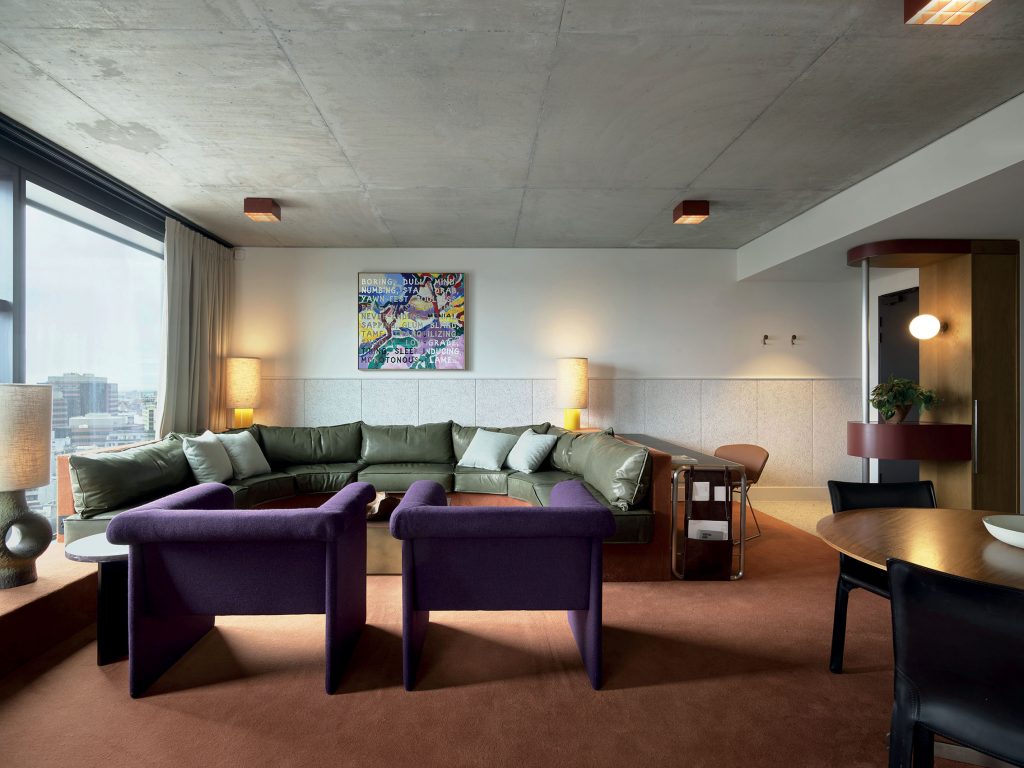 Eighteen stories above the city is Kiln, the hotel’s rooftop restaurant and bar. Unlike the rest of the hotel, Kiln was designed by Fiona Lynch Office, which took inspiration from the work of pioneering Italian-Australian architect Enrico Taglietti and Australia’s native grasses, sandstone plateaus, hardened blue clay and lush eucalyptus. The space created is uniquely Australian, with its keen attention to locally sourced sustainable materials, such as reclaimed timber, recycled glass and natural leather.

Lynch collaborated with Spacecraft Studio to create a unique dye process for Kiln’s textiles. Salvaged materials from the building site were crushed into pigments that were then used to colour the room’s linens. These custom-painted linens drape the walls and wrap window frames, paying homage to the building’s past life as a garment factory. 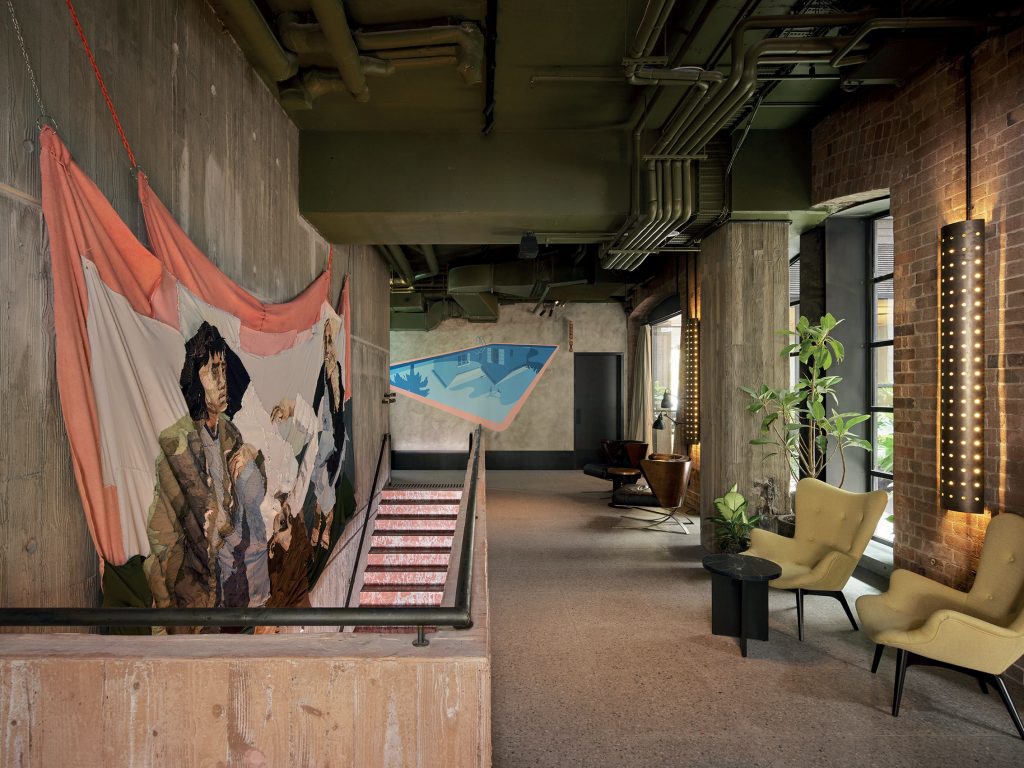 In designing the guest rooms, Flack Studio followed the modernist principle that everything should have its proper home. Each detail was carefully considered, from the colour palette of warm ochres, terracotta and sunset orange to envelop the guest and offer a counterpoint to the urban environment, to the custom-built furniture and joinery that nestles into the idiosyncrasies of the building with ease. Leather accessories were made to house the minibar and amenities, as well as create nooks for the traveller to store their sundries. 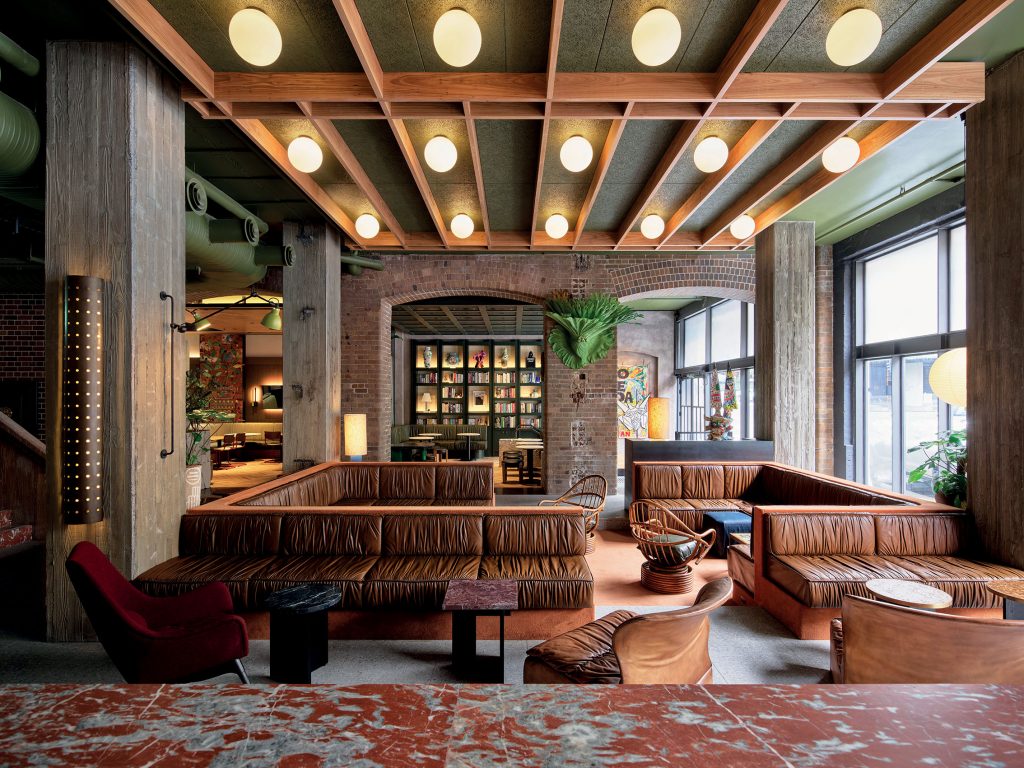 The custom joinery and furniture give the rooms a residential feel, while the nuances between the heritage building and the new addition mean rooms are unique in detail and character. In the rooms on the lower levels, exposed brickwork is seen, while the newer levels have terrazzo flooring. Some of the rooms have terrace balconies – a result of the vertical tower addition – while others feature historic bay windows overlooking Wentworth Avenue to the east, or oversized steel and glass factory windows overlooking Foy Lane to the west.

Most rooms have their own unique seating – a vintage chair, a daybed, or an in-built couch.

Flack Studio curated a diverse selection of Australian artists’ work to display throughout the building. Highlights include a ceramic library that’s inspired by the building’s former life as a ceramic kiln and features works by multiple artists. Elsewhere the work of First Nations artist Tony Albert, whose pieces incorporate kitsch domestic objects adorned with stereotypes of indigenous Australians, is displayed.