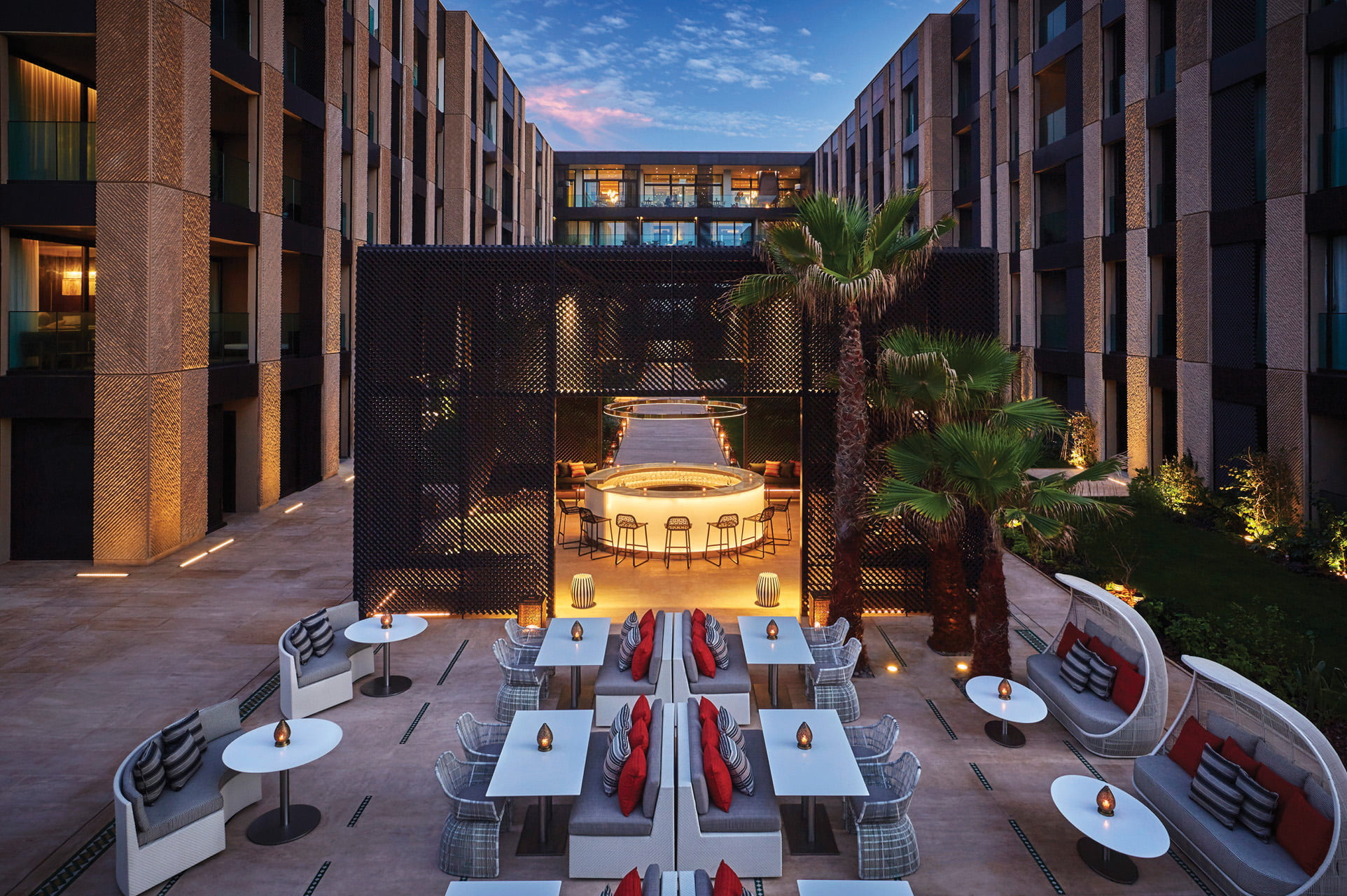 When one of the world’s leading luxury hospitality brands adds a hotel to its collection of nearly 100 properties across the globe, it has to be outstandingly good. Tonje Odegard examines Four Seasons Casablanca to see if the company has stayed true to its remarkable standard of beauty…

Located on a hillside towards the sea, Four Seasons Casablanca holds 186 rooms, including 29 suites, three restaurants, a lavish spa and a resort-like outdoor pool within its five stories. Reflecting the timeless elegance and luxury of Casablanca, Morocco’s busiest city, the hotel is a wonderful marriage between Oriental nights, Mediterranean vibrancy and European extravagance.

The sleek sand-coloured architecture (inspired by the beach) was designed by London firm Foster + Partners, one of the most innovative architecture and integrated design practices in the world, while G.A Design, also a London-based company, was responsible for the interiors. EDG, a hospitality and restaurant design specialist located in San Francisco, completed the signature restaurant.

With wide terraces and sleek floor-to-ceiling windows, Foster + Partners has been successful in creating an undeniably bazaar-like building, giving associations to the buzzing streets of Casablanca and Marrakesh.

Intimate in scale, the five-storey building is carved into the cliff side beneath the existing Corniche. You enter the hotel on the fifth-floor rooftop, which is on street level. Accommodations and amenities are located on the four floors beneath.

The rectangular sandy-coloured stonewalls are not only functional in creating a cool temperature, but also creates a fitting environmental effect. With the help of dark wooded outdoor window shutters, the look is complete.

The hotel courtyard, leading up to Latitude 33, the hotel’s signature restaurant, whose name refers to Casablanca’s geographical location, is lit up by classic Moroccan lanterns and lined with atmospheric palm trees. The glass balconies reflect the stunning, but calm ocean view, which stands in perfect contrast to the pale marble floors. The restaurant’s design includes traditional Moroccan moucharabieh lattice scenes, a dramatic open pavilion that houses a glowing circular bar, and in-floor lighting that creates the impression of a lantern. Black furniture contrasts with the white and cream lounge seating outside the pavilion.

Widely recognised for incorporating local architecture and cultural references into its concepts, G.A Design has brought the essence of Moroccan life into the interiors. Bathed in natural light, traditional motifs and craftsmanship are set against clean, modern spaces throughout the hotel, forming the perfect balance between modern elegance and colourful tradition.

David Clixby, lead designer and Senior Associate at G.A Design, said the initial inspiration was to create “a unique hotel with a real sense of placing dramatic contrast between light and dark, pattern and texture, and local artisan details and engineered forms, giving rise to contemporary interiors united by distinctive architecture.” The contrast Clixby intended works as a strong theme throughout the hotel.

For instance in the hallways; entering through a pair of lavish and heavy antique brass Moroccan doors, you walk on layered rugs in the corridors whose walls are covered in Spanish oak panels and polished plaster walls. In the spacious lobby, you are met with a crisp, light Moroccan-patterned wall behind the grey steel reception and shiny, black marble floors, complimented by luxurious details in golden brass. The special custom-made timber wall partitions for the lobby, with beautiful and decorative glass elements lit by LED strings, were made by G.A Design, with bespoke illumination from Lights of Vienna. This also marks the beginning of the experience of a journey through the souk, bringing quality and surprise as you explore the spaces.

The journey continues into the guestrooms, where the interiors are similar, but with additions of rich stone, brass and porcelain elements in colour accents inspired by traditional Zellige tiles. Although floods of natural lights are allowed through the windows, additional flexible lighting is key. Low drop-shaped ceiling lamps hovering over the nightstands, or tangerine-coloured brass-based lamps have a calming and authentic look. The customisable Four Seasons beds are framed in dark wood, creating a centre point in the rooms. Earthy, sandy colours makes the rooms feel welcoming and contributes to the sense of being transported to the characteristic labyrinth-like passageways of the souk. The Royal Suite also has the added luxury of a double-sided fireplace that extends out to the private terrace.

The bathrooms are nothing short of stunning. In different earthy shades of cream, brown and black marble (white marble in the Royal Suite), they are effortlessly luxurious with deep tubs, sleek lines and floor-to-ceiling windows.

In the Atlantic Ballroom, a series of dramatic custom-made crystal chandeliers with slightly curved rods, also supplied by Lights of Vienna, and enormous perforated Moroccan lanterns, supplied by Moroccan Bazar, illuminate the walls of golden, embroidered fabric panels, again contrasted by the dark marble floors. Full-length carved timber doors create the feeling of being in a grand room in a modern Moroccan palace. In the prefunction area, glass rod changeliers in two tiers form a centrepiece. Also supplied by Lights of Vienna, each of the chandelier rings are finished in polished chrome with clear amber coloured glass rods.

The play between light and dark carries on in Le Spa, which has a soothing natural palette of cedar wood, warm locally quarried stone and shimmering gold accents inspired by Morocco’s famous argan oil. Throughout the 10 beautiful treatment rooms, the relaxation lounges, sensorial experience showers, whirlpools and steam rooms, the luxury is never-ending. The two over-sized spa suites include a couple’s suite and hammam, as well as two Swiss-style balneo hydrotherapy pools.

The most striking section of the hotel is nonetheless the tea lounge, Mint, also completed by G.A Design. Here, the design takes a particularly luxurious turn in intimate seating areas surrounded by carved plaster walls and accented by Bedouin-style bench seating with embroidered cushions from Fez, and Berber carpets from Marrakech. Immense brass lanterns glow through perforations in the classic style, and ocean waves provide the soundscape. Ceramic pieces are also displayed alongside traditional artefacts from the souks in the pastry and lobby areas.

The journey created by G.A Design endures in one of the hotel’s eateries, the Mediterranean Bleu Restaurant, even though it was created under the leadership of EDG, a leading innovator in hospitality and restaurant design, with offices in San Francisco, Dallas and Singapore. Jennifer Johanson, CEO and President of EDG, says of Bleu: “As a vibrant economic hub and port city, Casablanca is steeped in history, yet very much future-oriented. Our design for Bleu evokes this essence in a distinct and modern way while capturing the imagination of travellers.”

A key design element arose directly from the restaurant’s concept – an elliptical open cooking station. Additional crudo and other culinary stations are arrayed like sculptures in a space defined by curves inspired by the ocean waves seen through its floor-to-ceiling windows and glass-walled terrace.

Reflecting the seaside location, the costal themes starts with Moss & Lam’s mural of ceramic mussel shells along an arching wall, leading into Bleu, and continues through flowing sculptural forms reminiscent of sea shells, covers and waves. The colour palette is bright with white plaster pairing with the endless blue sky and ocean outside. The sensuous, organic lines are in direct contrast to the building’s crisp elegance. Playful accents found at local bazaars add Moroccan textures, while traditional rugs with contemporary patterns warming up the white marble floors. Elegant, but cosy brown leather upholstery forms the seating.

Known for creating unique properties that are local and authentic, Four Seasons has done an admirable job with its Moroccan hotel. This urban oasis of Casablanca is the very definition of luxury hospitality while at the same time incorporating the country and the city’s culture in a subtle and sophisticated manner. “At Four Seasons, our design approach continues to evolve as we provide the luxurious comfort, technology and flexibility our guests want,” says General Manager, Oliver Thomas. The hotel brand’s ethos clearly works.