The Gleneagles Townhouse is, of course, the younger city-chic sister of one of Scotland’s most iconic country hotels and sporting estates, the one and now-not-only, Gleneagles. Opening earlier this year, the Edinburgh debut marks the first outpost for the brand beyond the rolling hills of the Perthshire countryside in its almost 100-year history. Jess Miles travels north to see how they match up.

The original Gleneagles could be considered a national institution, embodying the very best of Scottish culture and embracing the natural beauty of its surroundings. So, perhaps I could be forgiven for doubting whether the second property in an entirely different setting would dilute its prestige or even just live up to its namesake. However, upon discovering that the brand was acquired by Ennismore in 2015, any doubt that it wouldn’t be a roaring success dissipated from my mind.

Ever since its founding in 2011 by entrepreneur Sharan Pasricha, Ennismore’s know-how in building brands with creative storytelling, design, and authentic experiences has caused a stir across the hospitality industry. For a powerhouse with a now sizeable portfolio of brands under its belt, Ennismore seems to be a specialist in scalability but without the loss of its signature luxurious-but-unpretentious, home-grown vibe. The opening of Gleneagles Townhouse is only a testament to this; making you feel a million dollars whilst at the same time totally at ease and unjudged whilst you pronounce ‘cryotherapy’ wrong for the fourth time in a row whilst booking in your appointment at reception.

As it so happens, a 19th-century former bank building makes a rather fitting setting for a luxury hotel and members club that promises to be ‘a place to gather and be glorious.’ Originally home to the British Linen Company, later becoming the Bank of Scotland, the historic building has quite a storied past with an array of original features to show for it. In comparison to banks that we see on the high street today, banks of this period valued grandiose architecture and ornate décor as a tool to convey their economic status and stability to attract customers – this property being a perfect example.

An all-in-house feat, the team at Ennismore interior design and architecture studio, AIME, led by Charlie North, have spent the last five years sensitively restoring, reworking, and injecting life back into the property. Something that stood out to me quite quickly was how much of the property’s past has been carried through to its present story. Perhaps the most wonderful show of this lies in the case of the Corinthian columns and elaborate entablature which support the six statues adorning the building façade. The statues, by Alexander Handyside Ritchie – which each symbolise different pillars of society; agriculture, manufacture, commerce, science, architecture, and navigation – are brought into the hotel’s story by way of house cocktails. Sip away on ‘The Scientist’ (a fun concoction of 12-year-old Glenfiddich whisky, charred lemon, sugar, egg white, and absinthe) whilst watching the sun disappear beyond the statues themselves up on the lavish but low-key rooftop bar, Lamplighters. 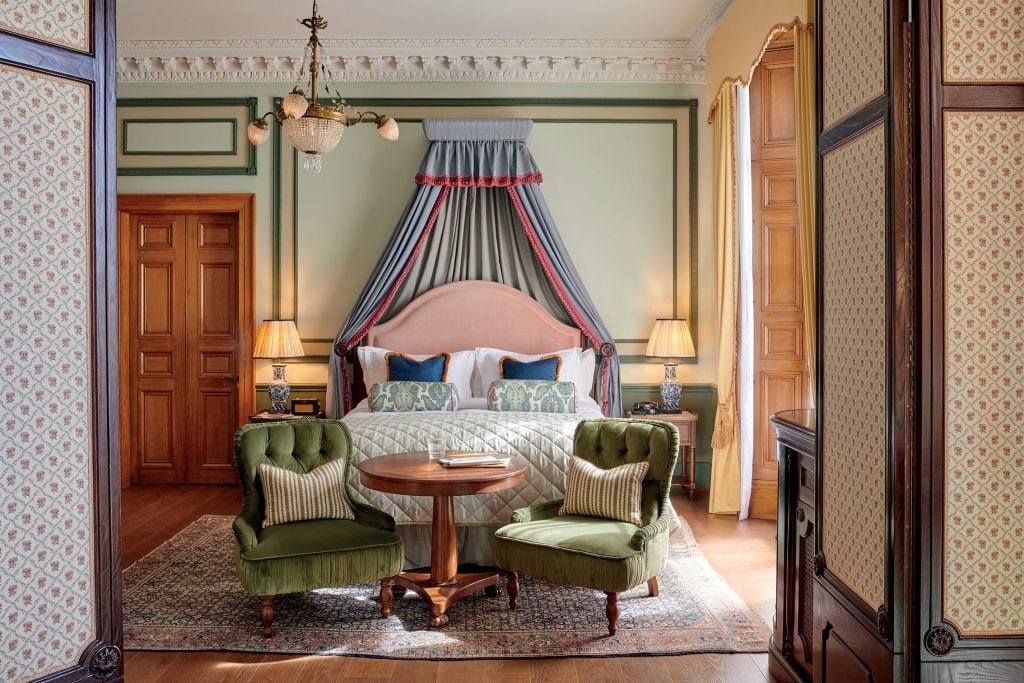 Quite literally a skip, hop, and a jump away from Edinburgh Waverly train station, the venture up north from London couldn’t have been any smoother. As I approach St Andrews Square, the Townhouse appears as inviting as ever. Against the backdrop of a crisp blue autumn sky, the afternoon light drapes across the Neoclassical architecture highlighting my way. Stepping inside, the entrance hall continues to flawlessly impress. Here and throughout the hotel, classical ideas are relaxed with modern updates. Contemporary art dresses the walls while the original tiling sits underfoot. Behind the traditional reception desk, old-school room key pigeonholes are replaced with colourful numbered boxes – which the hotel team can use to present gifted welcome surprises to guests as they check in.

A grand open staircase complete with an ornate gold balustrade wraps behind the reception desk, climbing up the vast double-height space to reach The Note Burning Room, the private members lounge. With the staircase only leading here (bar lift access and another stairwell), it really does feel quite exclusive. Inside, The Note Burning Room certainly isn’t an afterthought to appease paying members. Adorned with a feature bar, crystal chandeliers, two marble fireplaces, sumptuous furniture, and vast windows overlooking St Andrews Square, it is perhaps one of the most glorious spots to while away the hours within the hotel. 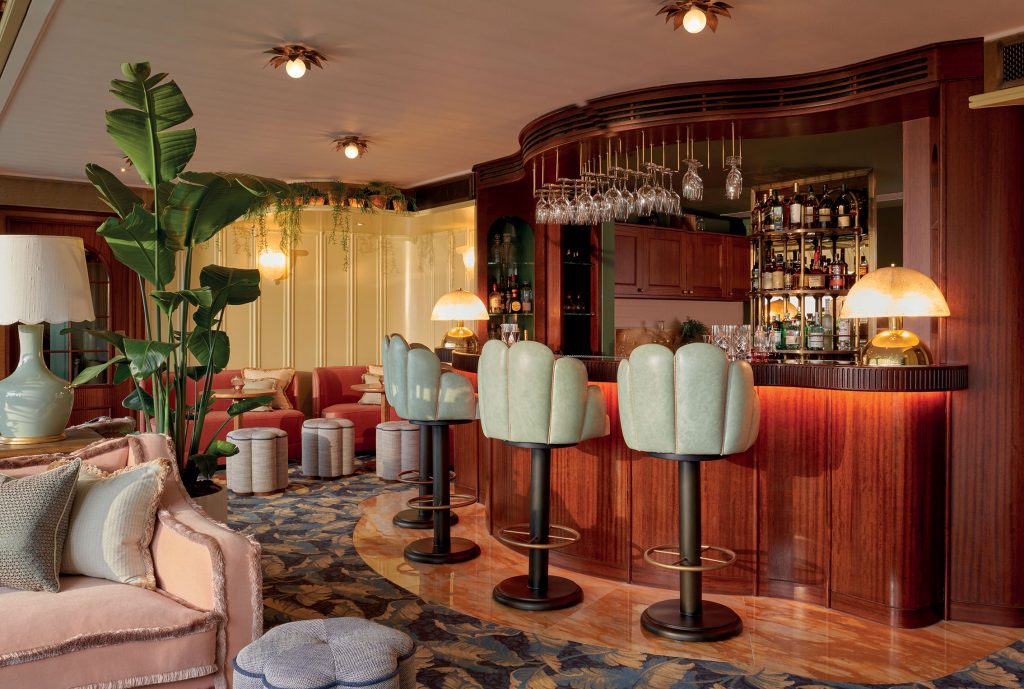 Having said that, I haven’t even discussed the jewel in the Gleneagles Townhouse crown yet, The Spence. Situated across from the reception hall, the sounds of indistinct conversation, dulcet tones of the piano, and cocktails being shaken up gently emanate from the all-day restaurant and bar, bringing an alluring buzz about the hotel. Being housed inside the old banking hall, the vast space is jaw-droppingly opulent. Cleverly though, the team at AIME designed The Spence to soften but work with the strong architectural form of the original space, creating a pleasing flow throughout. Granite columns frame the restaurant, whilst the feature bar sits centre stage in place of the telling desk in the former banking hall. Designed as a reflection of the etched glasswork dome overhead, the art deco bar features Tinos Verde Marble and a green timber veneer, finished with brass detailing and globe pendant lights. Throughout the restaurant, the extravagant stone attributes are humbled by the tactility of velvet banquettes and dining chairs in a soft palette of pistachio, powder pink, and rich burgundy. The dinner menu works in complete harmony with the space – heritage cuisine from Scotland’s natural larder refreshed with modern tastes. Sample argyle rock oysters ‘classic’ style, or if you’re in a rebellious mood try the ‘ceviche’ style with lime and jalapeno. Indecisively, I caved and went for both and did not regret it.

Tucked away between the reception area and The Spence, if you look hard enough, you’ll happily stumble upon The Telling Rooms – the Gleneagles Townhouse’s best-kept secret. Consisting of four intimate spaces, you enter straight into the Pantry which co-joins onto the library, two fully equipped meeting rooms, and a small terrace. By day, the library is a casual spot to co-work whilst grazing on help-yourself snacks and coffee. As the lights go down however, the Telling Rooms transform into a rather fancy home away from home. Tech from the working day is all cleverly tucked away behind the floor-to-ceiling bookcase, which also opens to reveal a secret doorway to The Spence, making the meeting rooms a perfect private dining space. The Pantry and library – designed to feel like an open plan kitchen-lounge – switches to a dimly-lit snug come wine bar. Perch upon the Breccia Medicea-topped freestanding island whilst admiring the hand-painted Delft tiles to the pantry splashback, and a sommelier will soon join you as if you’re old friends popping over to indulge in a glass of wine and some artisan cheese.

After an indulgent evening of fine dining and drinking, retiring to one of the 33 rooms feels like a privilege. Though all differ in size, they share many of the same handsome design features. In keeping with the décor throughout the hotel, the guestrooms meld Georgian craftsmanship with contemporary chic. I was lucky enough to have checked into one of the first-floor Town Bedrooms boasting large windows reaching up to the high ceiling and peering out on St Andrews Square. In number 9, a canopy crown king-sized bed complete with drapery and a mohair upholstered headboard sits pride of place on a backdrop of soft green panelled walls, altogether oozing luxury. Though, from the antique chandeliers to the window-side rolltop Victoria and Albert bathtub, to even having your room ‘turned down’ at night, the list of luxuries could go on forever.

Ultimately, the Gleneagles Townhouse has certainly shaken up not only Edinburgh’s luxury hotel market but also the Scottish city’s social scene. Visiting house guests, members, and local patrons alike all have good reason to flock to St Andrew’s Square for all occasions. Whether a birthday brunch at The Spence, or a spin class down in The Strong Rooms – the hotel’s spa and wellness space which occupies the bank’s former vault in the basement – anything indulgent goes. In my opinion, great design lies secondarily within aesthetics and primarily in how we experience it. Here, these two aspects of design are wonderfully indistinguishable with the airy, fun, yet glamorous spirit of the hotel emblematic in the décor and vice versa. And so, in answer to my own doubts – yes, the Gleneagles Townhouse certainly does live up to its namesake.