Out with the old and in with the new as of December 2015 when the new Hilton Amsterdam Airport Schiphol opens for business. The hotel is more than just an impressive landmark – it has redefined airport hotel design, writes Hamish Kilburn…

The old Hilton at Schiphol airport is now a mere silhouette underneath the shadow of the ultra-modern Hilton Amsterdam Airport Schiphol. The hotel is as impressive on the inside as it is from the outside. Developed by Schiphol Real Estate and designed by the acclaimed Dutch Mecanoo Architecten, with interiors imagined by The Gallery HBA in London, the hotel is unlike any other you will find in an airport.

Step inside and look up, that’s my advice. In the day, you may catch the occasional plane flying overhead. By night the atmosphere changes and guests are welcomed by an eye-catching display of light reflecting off the 42-metre high glazed roof. The atrium is, by far, the beating heart of the building. Designed to create a free-flowing pulse in the communal area, the cocktail bar and lounge are connected. Neutral colours and one-off furniture are subtly separated by laser-cut screens modelled after the maps of Amsterdam’s canals which are carefully positioned to give guests privacy while keeping the space open and fluid. “The abstract shapes of the carpets have been inspired by maps and aerial views of the Dutch coastal landscape” says Constantina Tsoutsikou, head designer from The Gallery HBA.

Upstairs, 433 rooms have been designed to offer two perspectives. Guests can either choose an atrium-facing or outer-facing room. Throughout, Dutch culture is stylishly referenced in the interiors. Art pieces created in collaboration with the Delft-based artist, Israel Paez, are displayed above the headboards while Dutch embroidery designs are printed on coffee tables, and, in the ground floor public areas, a steel wall flows through the entire space, its design is also inspired by the maps that trace the old sea routes of Dutch trading ships.

To the exterior of the building, layers of colour – black, white and grey – combine with diamond-shaped windows to imitate a snakeskin appearance, which disguises the rooms when looking in from the outside. The core design serves to emphasise the iconic appearance. “The façade is very recognisable. The 45-degree twist is important. Yes, it creates an iconic landmark, but it also creates a new direction. It also sits comfortably on the curve of the highway to the arrivals and departure terminals,” says Ellen van der Wal, Partner at Mecanoo Architecten.

On floors 9, 10 and 11, the executive suites follow a ‘home-away-from-home’ concept. On the 10th floor a large Executive Lounge offers panoramic views of the airport and the city of Amsterdam. Its interior is an elegant balance of the contemporary and the classic.

Quick morning meetings can be held at the marble breakfast buffet while the library, with its high-back velvet armchairs, offers a comforting escape for discreet conversations or browsing the books displayed in the timber bookcase.

The jewel of the hotel comes in the form of the Diamond suite. Featuring an M.C. Escher-style polygon woodcut floor in the bath, living and dining areas, it is as the name suggests, luxurious and beautiful. Fabrics are rich and tactile while chic contemporary furniture combined with more idiosyncratic pieces ensure the design narrative moves a world away from the clinical airport atmosphere.

Night and day is a strong theme to explore in an international airport hotel. Time becomes an abstract concept to many suffering from jet lag or those whose flights have been delayed. As well as spotlights on the balconies reflecting light onto the ceiling, even the carpets in the corridors have been designed so that one side is light and the other dark. The hotel’s gently curved design means the corridors feel welcoming and avoids the sight of long hallways stretching ahead.

The spa has been created and inspired by Schiphol Airport’s position four metres below sea level. “Imagine you are in an underwater world in this part of the hotel” says Tsoutsikou. Levels have been explored to exude a true sense of tranquillity. In reception, faceted glass chandeliers encase a glow; wrapped and suspended from rope, they give a nod to the rustic-maritime history of Holland’s north-sea coastal towns and cities.

Designed with location in mind, the Hilton Amsterdam Airport Schiphol is connected to the airport by a covered walkway, the Traverse, bringing travellers directly from the terminals to the meeting centre and further into the atrium. The hotel boasts an impressive 1,700 square metres of meeting and event space and will be the airport’s leading conference hotel.

It’s taken a number of years, but it has been worth the wait. The new Hilton Amsterdam Airport Schiphol will accommodate more than double the amount of guests that the old building could. With modern design in both architecture and interiors, the opening of this hotel will stand as a significant milestone in international airport hotel design. 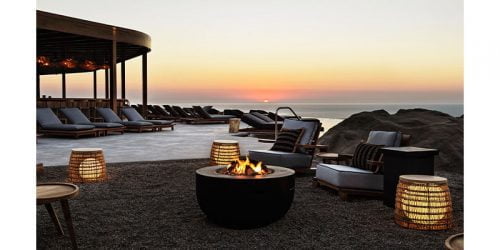