When it was announced that the AMANO group were to convert an eighties office block into a boutique hotel, in London’s Covent Garden, eyebrows were raised. Those same eyebrows framed wide-eyed admiration when the results were unveiled. Following a successful summer launch, Emma Kennedy paid a visit to the dramatic new hotel. 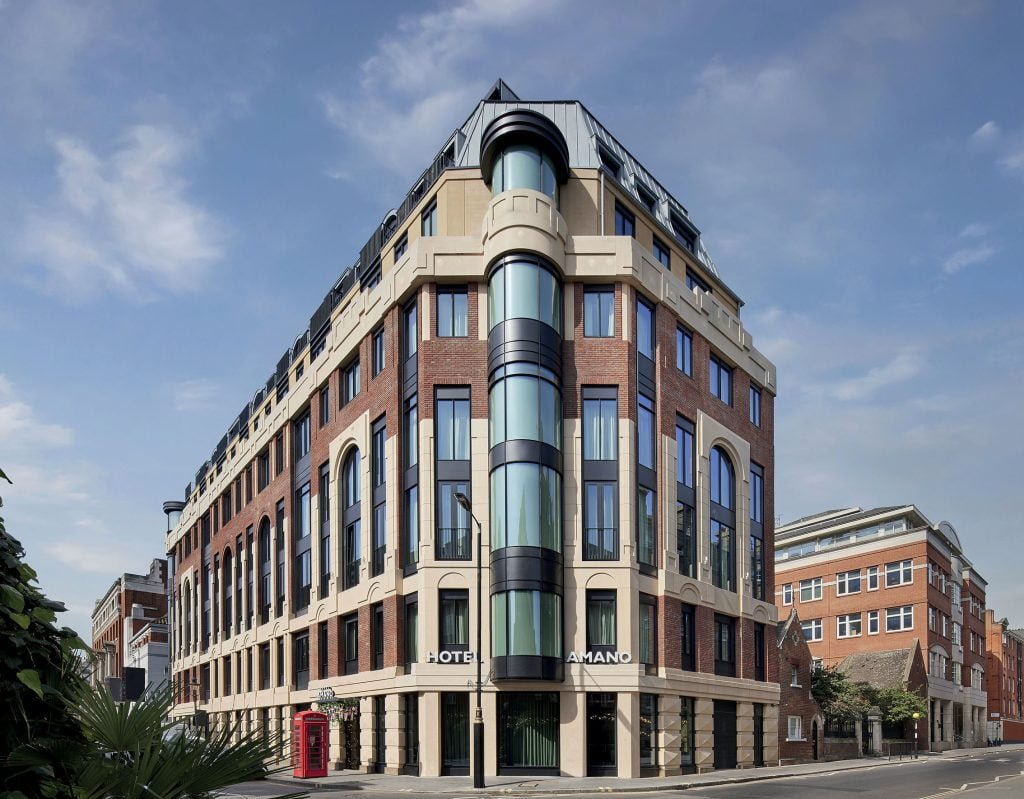 As eighties office blocks go, this really isn’t the worst example. Relatively sympathetic to its Victorian neighbours, one imagines there were strict planning constraints in place when it originally took up residence in the heart of Covent Garden. Straddling the corner of Drury Lane and Russell Street, its location is hard to beat, assuming being central is part of the remit.

Having moved the entrance from its prominent corner position to Russell Street, the discreet glass doors lead the way through to a slick lobby. Dark wood floors and charcoal wallcoverings are punctuated with gold detailing. A brightly lit collection of ribbed tubular glass lighting, hang like falling twigs from the mirrored ceiling, drawing the eye to a smart reception desk. Clean in design with echoes of Biedermeier, it is a gentle nod to the group’s German heritage. Across the floor, sofas, Ottomans and armchairs with gentle curves and soft textures provide chic seating in earthy tones. 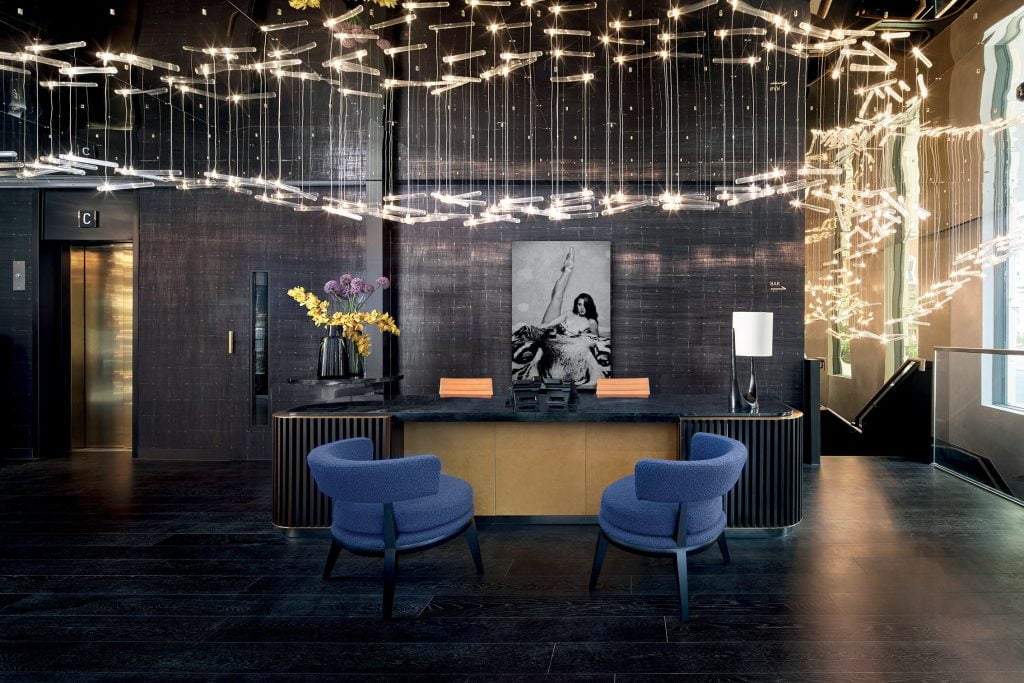 The first port of call for any curious (or thirsty) guest is the basement bar. Still under the gaze of the light installation, stairs lead down to the deeply sumptuous lounge bar. Dark and decadent it’s a medley of marble and mirror with flashes of gold. The bar is straight out of a film set; liqueur bottles positioned and lit to perfection sit in gold inset shelving behind the marble counter served by tall bar stools. Glass pendant lights glow seductively overhead, and contemporary club chairs in muted hues gather round drinks tables. Blue velvet banquettes offer intimate social spaces, and sofas in front of a fire make up the seating options. For private gatherings there is an area that can be screened off for privacy- though I can’t imagine many guests would want to be denied the view of a night unfolding in this bar. 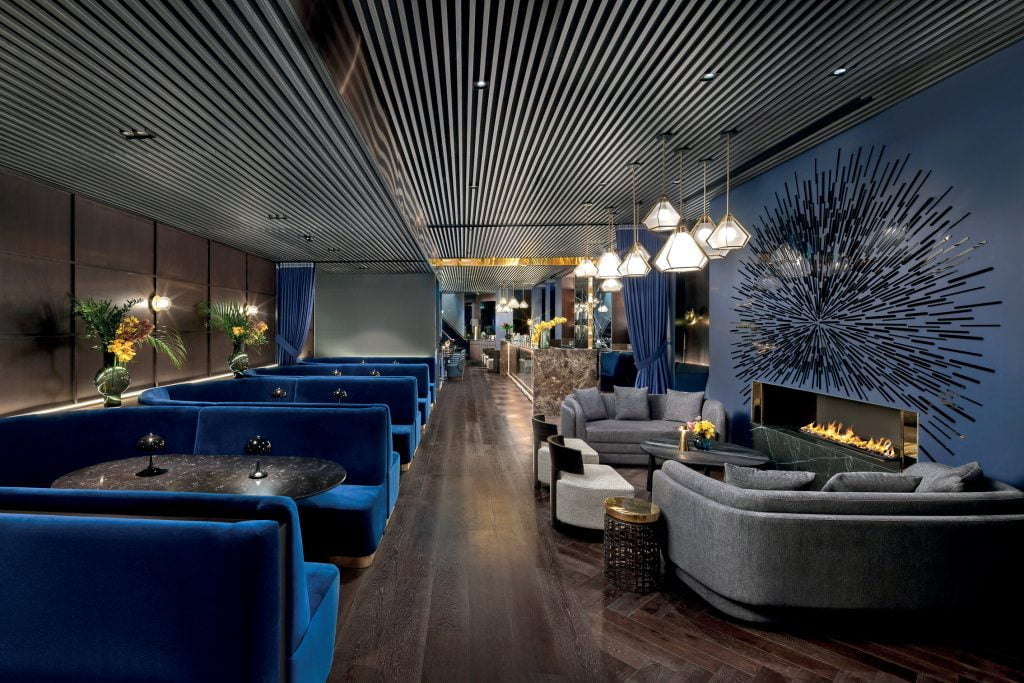 Back on the ground floor is Amano’s signature restaurant Penelope’s. In true keeping with the Amano vibe, it’s an exciting space with an even more exciting menu, offering “Israeli-Spanish fusion food, music and dancing…” Inspired by her background, co-founder Ariel Schiff said, “Growing up between Tel Aviv and southern Spain exposed me to some amazing food from a very young age, an experience that inspired me to bring those flavours together at Penelope’s.”

Seating up to 160 guests across raised platforms, there’s a mix of cosy corners and spacious booths, plus a private dining space large enough for 20 people. Charcoal walls are the backdrop to the signature blue and gold seating palette, and a ceiling decoration that is stand-out stunning. Curved lengths of textured metal in rose and yellow gold create a wave like pattern casting a warm glow below. 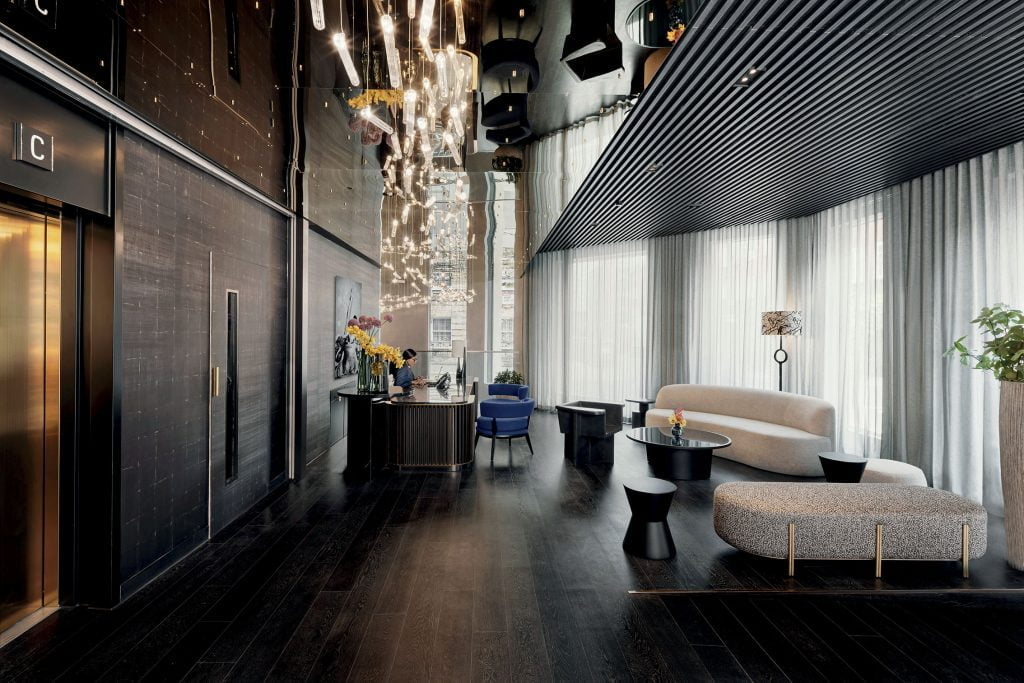 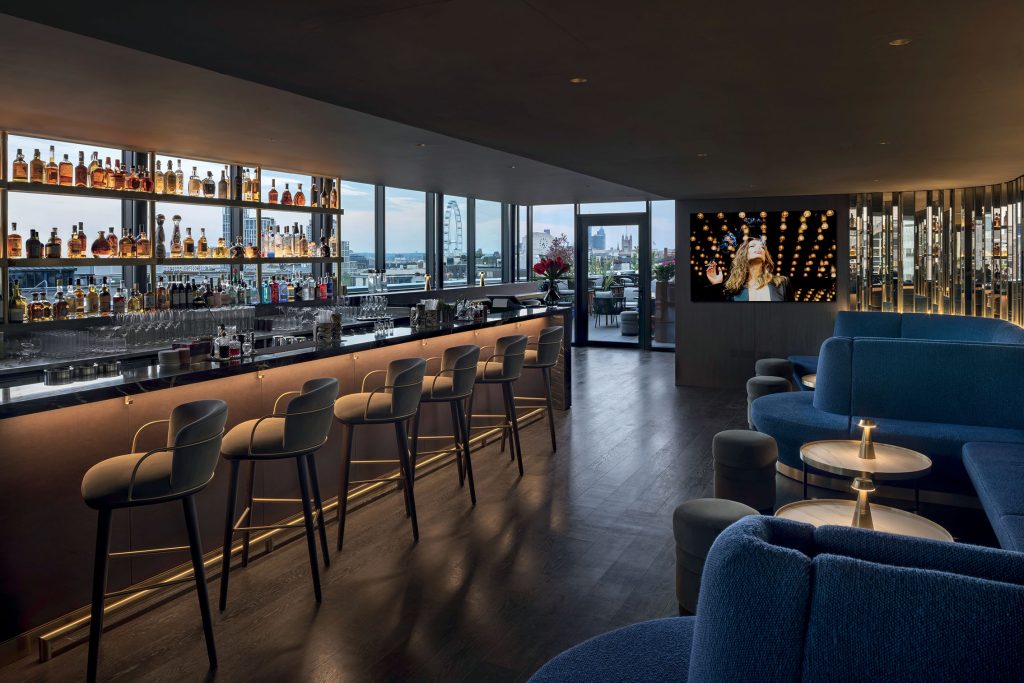 Back in the lobby, the gold lift transports you directly up to Amano’s  crown – the Roof Terrace Bar.  By their very nature, roof terrace bars tend not to disappoint, though some are more exciting than others!  Angled slices of mirror, reflect the bar opposite with a cinematic caste. The run of windows behind the bar, provide guests with the same far-reaching views enjoyed by those who opt for the fresh air of the terrace. Outside, an abundance of greenery spills from a planter that forms the back of the crisp wooden bench seating. Even on a cold pre-Christmas evening, it’s a great place to be. Warmed by the house cocktails, we soaked up the sparkly glow of London by night. 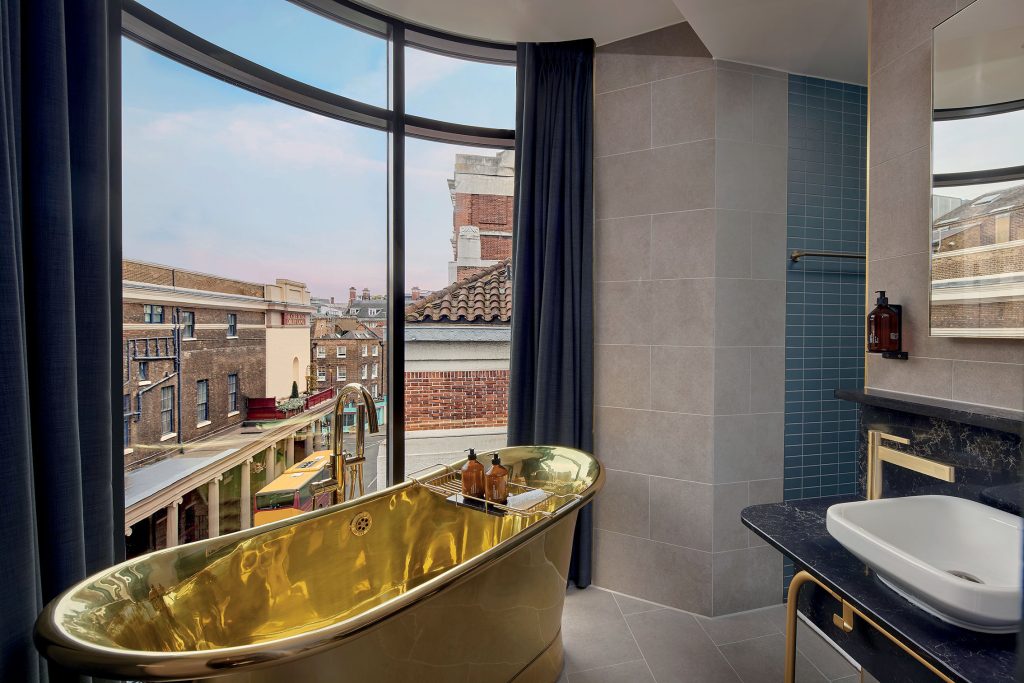 Back in the lift, the floors below house the 141 guest rooms. Greeted by an expanse of crisp white cotton, the huge bed, takes centre stage of room 116 otherwise known as ‘Goldy’. Looked down upon by a huge grey headboard  edged with wide panels of brushed gold, the dark grey walls bring a deep sense of calm. Floor to ceiling windows look across to the back of the Theatre Royal – and a bull’s eye view of the Stage door. The room design is efficient, with well-lit wardrobes, an island desk area for the coffee machine and feature lighting. Blending in quietly with the walls, is the door to the ensuite, home to the shiniest gold, free-standing tub I have ever seen! In some quarters it could be deemed ostentatious… but not here! Positioned in front of a huge, curved picture window, the immediate view – in alarmingly close proximity – is the Fortune theatre. Currently showing ‘The Woman in black’, the promotional poster; a haunted man with piercing eyes – looks straight back at me. Somehow, it’s all fabulously in keeping with the theatrical vibe of the hotel and its neighbourhood – even if a little disconcerting.

Until now, the Berlin based AMANO Group have not ventured out of Germany, but expansion was always part of the plan. Ariel Schiff commented,  “As a Berlin-based company, opening our first international property in London was always a natural step for us. Like Berlin, London is a dynamic city known for its thriving nightlife and multicultural community. We felt the spirit of the AMANO brand would blend in well here. We’re excited to open our hotel to guests and offer a unique hotel and leisure experience, bringing a taste of Berlin to London.”

Tasked with the delivery of all Architecture and Interiors, were London based studio Woods Bagot, led by Brooke Radtke (interiors) and Davide Bertacca (architecture). “At the very start of the project, Davide and I flew to Berlin and spent a couple of days getting to know Ariel and the wider Amano team.” Brooke explained. “They are a smaller family run operator, so their approach was quite different to the bigger hotel chains. On numerous occasions we returned to Berlin and spent time with them in their hotels, bars and restaurants. This gave us first-hand experience of the warmth of hospitality the client offers.” Reflecting on the design choices, Brooke added, “This was the perfect brief and allowed us to better understand their values as a brand as well them as a client. In addition to bringing the AMANO brand in, we were able to draw inspiration from the local context of the surrounding theatre district. We added elements of drama and intrigue through feature lighting, art, mirror and reflections. We then added a dark and moody yet glamourous overlay through use of luxury materials
and furniture pieces.”

By all accounts the relationship between The AMANO Group and Woods Bagot was positive from the beginning and is demonstrated by the hotel’s coherent and harmonious design. The feeling of fun hits you as you walk through the door. There’s an irreverence within the design details which is matched only by the staff- who even on a busy weekend in central London, retain the sparkle in their eyes as they attend to your every need. 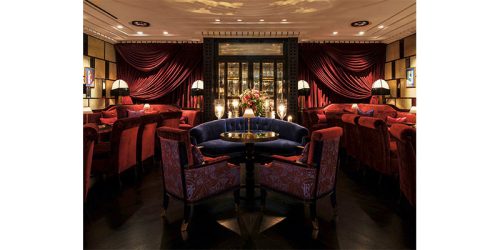