Design studio, Jouin Manku has revealed the completed interior spaces that it created for Celebrity Edge, a new luxury cruise ship scheduled to set sail on its maiden voyage on December 9th from Fort Lauderdale, Florida. On board, the studio designed The Grand Plaza, the Main Dining Atrium and the connecting circulation spaces. Designers Sanjit Manku and Patrick Jouin came to the Celebrity Edge project with a sense of excitement and wonder, and the desire to capture the magic of travelling by sea. Inspired by the glamour and adventure of the pre-war era of travel, they sought to transform this experience for the 21st century.

Manku and Jouin begin each project with an emotional choreography: how they want people to feel at each particular moment as they move through a space. Only then do they begin to sculpt the space, defining the proportions, the elements and the materials that will evoke these emotions. Designing every aspect of an interior – interior architecture, furniture, carpets, lighting – they enjoy shaping the complete guest experience.

At the core of their concept for Celebrity Edge was their wish to create spaces that would remind guests that they are on a ship, offering the luxury and comfort of a boutique hotel within an experience that speaks to the out-of-the-ordinary experience of travelling by sea.

From the outset, they sought to celebrate the craft of the shipbuilders and welders who constructed Celebrity Edge. In a traditional cruise ship interior, the slim and elegant internal steel columns are hidden beneath layers of materials or dressing that inflate their proportions. Manku and Jouin sought instead to show them off, collaborating with the shipbuilders to find forms that were structural and pleasing, allowing them to feature the ship’s skeleton within the interiors.

Manku and Jouin wanted the language of the ship to be inherent through all of the spaces they created. Just as a ship has no 90-degree angles but instead curves to allow the forces of nature to flow around it, they played with this fluidity, avoiding sharp angles and rigid surfaces to shape ceilings and walls in sympathy with the structure in which they are encased.

The Grand Plaza is one of the most important social gathering spaces of the ship – the successor to the ballroom of the classic cruise ships. It is a space that is in use at all times of the day and which guests cross when passing from one end of the ship to the other. Manku and Jouin set out to create a space that is comfortable, warm and intimate – but that could also be spectacular.

Conceived as a piazza surrounded by cafés and restaurants, full of life day and night, The Grand Plaza is a space in which to see and be seen. At its centre, a round bar radiates social activity and energy, encouraging guests to meet and interact as they make eye contact from one side to the other.

Above the bar, the feature chandelier reaches down towards the guests and gives a sense of the sky and the stars above. As the activity in the Grand Plaza changes during the course ofthe day, the chandelier changes also. By day it is dormant, a beautiful sculpture that takes on some of the reflections of the natural daylight, but then as the sun goes down, it begins to glow a warm orange, illuminating the space. Later still it starts to pulse, dancing and entertaining into the night – a beating heart. At each moment in the day it reveals itself in a different way.

Around the central bar and chandelier, the lounge is terraced, offering a variety of settings and groupings that create a sense of intimacy in an otherwise large and open space. The wide edges of the bridge above invite guests to stop, lean in and watch people across the plaza.

The Grand Plaza is a very open space that guests will encounter many times during the day. To retain some of the intrigue of the space, three large screens are set in the central lounge area, offering tantalising glimpses as guests pass by. Designed in collaboration with architectural embroidery specialists Studio MTX, the screens repeat a series of modules crafted in metal, leather and fabric. Up close they appear more like jewellery and as the facets of the different materials glint in the light they create a shimmer across the plaza. The screens also serve to contain the energy within the space, as well as absorbing some noise and providing a certain visual security.

All of the elements in The Grand Plaza were designed by Jouin Manku, including installations, lighting design in close collaboration with l’Observatoire International, and furniture, creating a completely bespoke and unique interior that is comfortable as well as enticing. Balancing the classic with the contemporary, wood, metal, resin, leather and fabrics are the materials that predominate – some matte to absorb sound and others reflective.

From The Grand Plaza, Jouin Manku designed the circulation spaces that lead to the Main Dining Atrium. These circulation spaces within the very centre of the ship again remind guests that they are in a vessel shaped by the forces of nature, with no perpendicular angles. The walls are dressed in sound-absorbent fabric panels which recall scales, reflecting light and opening up by turns to reveal the skeleton of the ship, even the upside-down lettering applied to the steelwork during construction.

The Main Dining Atrium is a triple-height space which connects five restaurants across three levels. The curved white staircase entices guests to follow its pathway and explore from level to level. Inspired by the moment of breaking through the threshold from one space to another, into the unknown, the experience of the staircase has been designed to be more than just functional – it is also emotional, guiding the guests as if in a dance through the atrium in a fluid movement.

The focal point of the atrium is a brass pendulum which descends through the space. It evokes the wonder of the ancient navigational tools that served seafarers for centuries before the advent of satellite navigation. The installation reminds guests that they are afloat, even if they can’t feel the sea’s movement within the ship.

“Every project is an individual dream, a new experience brought to life. As the first guests board Celebrity Edge, we hope that they will be captivated by how they feel in the spaces that we have created – and charmed by the magic of travelling by sea.” Sanjit Manku and Patrick Jouin 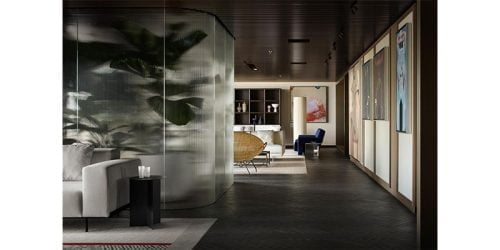