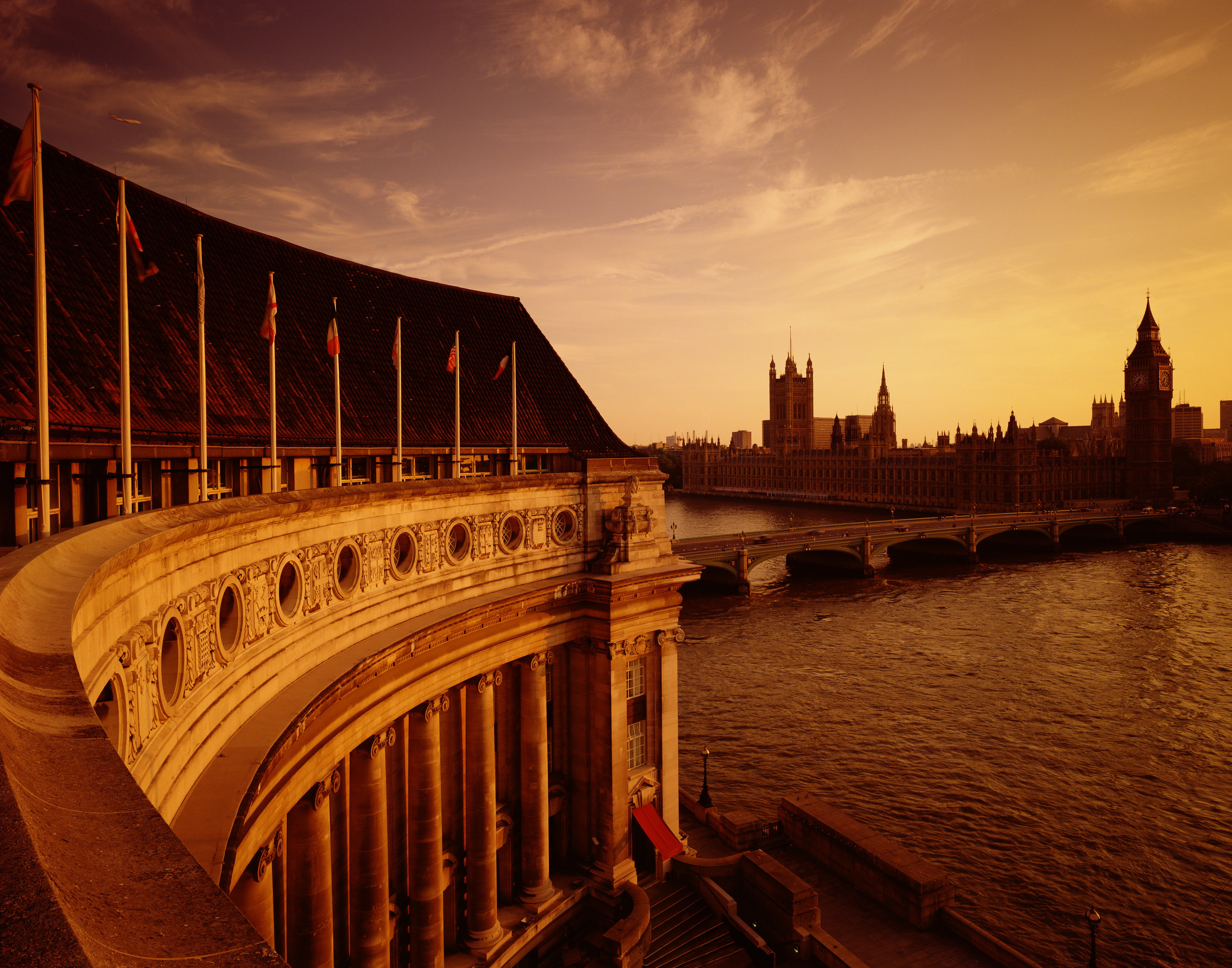 In 2014, the task to evolve a hotel under the roof of an iconic and well-documented listed building was accepted by RPW Design. Opening fresh, new interiors with appropriate reference to its colourful history, Marriott County Hall takes its place as one of London’s finest. Hamish Kilburn writes…

Since opening in 1922 – and finally completed in 1933 – until it was sold in 1993, County Hall, London has housed many infamous political conflicts that led to significant moments in UK governmental history. The resilient building’s concept has stood the test of time – even World War II – and came to life when an assistant of architect Aston Webb won a competition to design a grand new home for the London County Council (LCC) – formerly situated in Spring Gardens. Ralph Knott’s palatial design attained supremacy among the 152 other entries. The sketches soon became the name and the iconic construction that now stands as a city landmark, County Hall, London.

Today, among other facilities, the landmark-listed 40, 000 square-foot building holds within it the Marriott County Hall, which first opened following the sale of the building in 1993 for £60 million. Most recently, London-based RPW Design was appointed to steer the hotel through a multi-million pound renovation. It added contemporary elements in the right places while enhancing the original building’s structure to stay true to the hotel group’s – and County Hall’s – rich and well-celebrated heritage. “Through a careful exercise of understanding and reincorporating architectural and historic details of the building, both architecturally and decoratively; the space at the Marriott County Hall has been significantly enhanced while maintaining its inherent distinctiveness,” said Elizabeth Lane, Director of Projects at RPW Design.

According to a recent report released by JLL, location is everything, and with 26 per cent of luxury hotels in London being positioned within the borough of Westminster, competition is at its highest. That’s why it’s interesting that the public areas don’t resemble much a hotel at all. Having played the heritage card, the entrance and the corridors in the lobby honours the original architecture. In order to enter through the main entrance, guests are directed away from the busy streets of the Southbank and instead they enter through a grand courtyard where their first impressions of the interiors are made. The original wrought iron detailing forms a bold entrance. That, along with the ceremonial gates leading to the council chambers, was key inspirations for the design and the story of the hotel’s renovation started here. “We used the bronze tone in the metal work found in the entrance and reworked it into the bedrooms,” explains Elizabeth Lane. “Beforehand, there was nothing in the guestrooms to portray the building’s heritage. Now the bronze is reflected in areas such as the metal detailing in the furniture and the cabinetry handles.”

On each floor, a feature wall made up of iconic London-based Penguin books covers is the first thing guests notice when coming out of the lift. Chosen for its British connotation, the wall is loud and forms the wallpaper for a framed selection of printed books to hang.

The curved corridors, which together equates to an astonishing seven miles, are complete with subtle British-inspired wallpaper that portrays grey and black top hats and umbrellas, while the curtains depict pocket watches and fountain pens. Accented with colourful art pieces that represent the modern and buzzing streets of London’s Southbank, art curator Peter Millard made the space open and contemporary. “Those corridors are very long, so we needed to create some interest,” admits Lane. “We needed to make the corridors a discovery space to keep it more interesting for the guests. We decided to create areas of interest with fun artwork to look at on your way to your room.”

Framing one of London’s most iconic riverside view, the hotel’s 200 guestrooms and 17 suites portray elegance and warmth while maintaining a residential style throughout. The location of the hotel is subtly referenced. For example, the minibar console doors are decorated with a faint representation of the River Thames. Working closely with RPW Design, lighting design expert Elektra aimed to blend both traditional and contemporary lighting throughout the building. “Every guestroom and floor is different, which required our individual attention,” says Lighting Designer at Elektra Alexia Gkika. “We had to comply and respect certain regulations, be innovative with lighting methods proposed and also make the most of the given space.” The priority for the lighting design team was to ensure that the lighting was kept in line with the style of the building to preserve its character while keeping the interiors fresh. For example, the bedside lamps are not uniformed in every room and some feature Chad Lighting’s stitched-leather Harness lamps to keep a classic feel. “You could say that the lighting merges with the architecture,” explains Gkika. “We chose to integrate light to the architectural elements of the spaces, where possible, in order to blend the new with the old, creating a soft contrast between the two.”

The bathrooms were taken out and totally reconfigured. “When you walk in you get a sense of arrival,” explains Elizabeth Lane. Sliding doors open to reveal black and white wallpaper that represents a map drawn up from when the County Hall was built in the 1930s. “The original map was specially commissioned and you may notice that there is a break in the map, but it is deliberate as this is how maps of that time were produced.”

Exposing the overwhelming views of Westminster further, the pertinently named Westminster Suite is the hotel’s most spacious abode and perfectly frames the dramatic skyline. The suite is complete with a collection of seven artworks of varying sizes installed on a curved wall, which plays the narrative of the colourful history of the property. It maintains the same reference from the other guestrooms and it oozes British sophistication with quirky twists, in the same way as the orange chair in each and every room reflects the same colour as the traditional debating chairs. “It was really important to keep the same base story running through the hotel,” says Elizabeth Lane. “The Westminster suite had to represent sophisticated Britishness with an individual humorous element.”

Marriott County Hall ushers into a new era with fresh, thoughtful and contemporary design elements very much now part of its DNA. The final piece for the collection will be the lobby areas, which will feature an open champagne bar and further cement the hotel’s position as one of London’s finest.