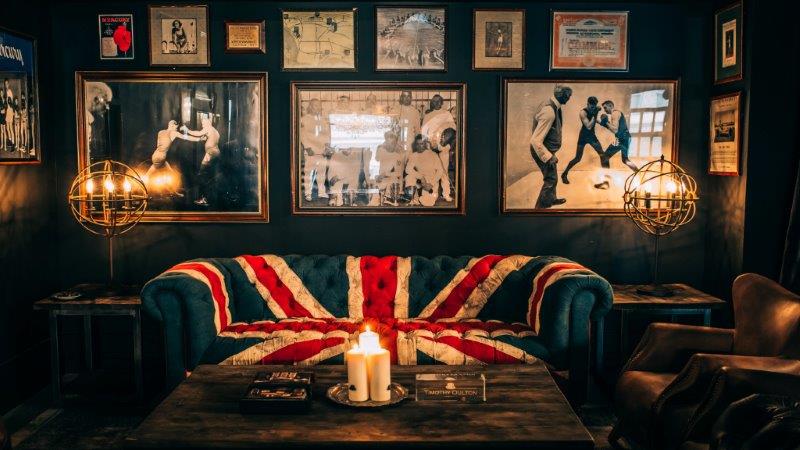 Founded back in 1880, before the Staples Centre was but a concept and the City’s now-popular shopping district stood bare empty streets, The Los Angeles Athletics Club (LAAC) opened as LA’s first private club. Its illustrious rooms were grand, statement-like pieces that were beautifully crafted and served a relaxing purpose. Historic buildings like these are ones to be cherished, perhaps that’s why contextual references of the past plays a strong role in the recently renovated Blue Room in the 72-room LAAC.

The recently renovated exclusive members-only Blue Room forms part of LAAC’s multi-million dollar renovations. Timothy Oulton, known for his reinterpretation of classic designs through modern eyes, has redesigned a space while celebrating more than 100 years of heritage with a fresh, modern and gothic-influenced reinvention. The original Blue Room opened in 1912 and was where LAAC’s influential Uplifters Club was formed in 1913, counting Walt Disney and Clark Gable amongst its prestigious members.

During the LAAC’s renovations, a long-forgotten hidden staircase was unearthed between the third and fourth floor; a clandestine passage used during Prohibition in the 1920s. It was decided to turn this into the main entrance for the Blue Room, celebrating the club’s legacy and adding a sense of humour and playfulness to the project. A trick bookcase in the third floor bar now opens on to the intriguing secret stairwell, where black walls are covered from floor to ceiling with framed photographs chosen from the LAAC’s archives, each one telling a piece of the club’s history. An accent wall of Oxford Blue creates depth and coordinates with the existing shutters that frame the oversized windows.

Several intimate areas have been created to form private areas perfect for meetings or small private dinners. Its club-within-a-club vibe is unique and a offers a comfortable, fun and private area for members.

In one candle-lit corner of the room, Oulton’s signature flair for juxtaposing the classic with contemporary is brought to life in the hand-softened leather Scholar armchairs and Westminster Union Jack sofa. The true wonder of this project is in the detail. Industrial elegance infuses the Axel coffee and side tables that are handmade from reclaimed boat wood, while Gyro lamps that are inspired by ancient navigational instruments are perfectly placed. To add to the old Hollywood allure, an antique projector and movie screen is set up so that guests can enjoy some black and white classics.

A gallery of photographs add further to the club’s athletic heritage. Match Point is an artwork created from vintage wooden tennis rackets and appropriately hangs on the wall. A refined Crystal chandelier hangs in contrast above the rustic oak Boston dining table topped with distressed aluminium, ready to host conversation next to the cocktail and whisky bar.

The Blue Room is an exclusive members-only area of the LAAC with contextual reference to its past blending beautifully with the modern-infused design throughout. Much like the rest of the hotel, the room has a private and authentic atmosphere. The Blue Room is located in a one of the top athletic facilities in LA. It’s a modern hub for guests to relax, unwind and enjoy the stunning interiors of true old-Hollywood charm.