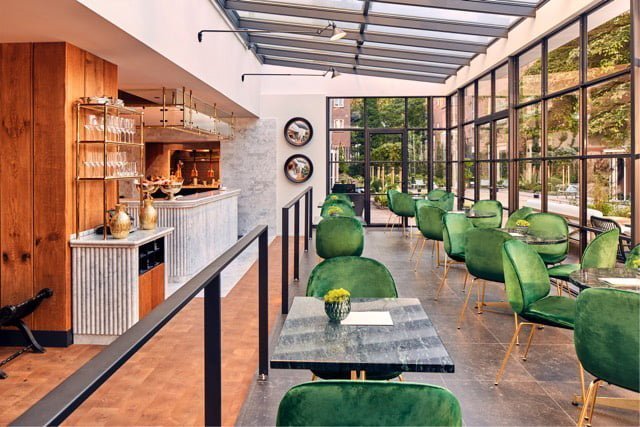 The Pulitzer hotel in Amsterdam has everything going for it. It’s flanked by two canals, is surrounded by some of the city’s best boutiques and restaurants and is a short walk from several of its most famous tourist attractions; and it has undergone a three-year renovation under the guidance of Creative Director Jacu Strauss, formerly senior designer at Tom Dixon’s Design Research Studio. Little wonder that Condé Nast bill it as “the best new hotel in Amsterdam”. Of course, the Pulitzer hotel is not actually new; it’s not even new as a hotel. Originally 25 separate four hundred year-old canal houses, the first 12 of which were turned into a hotel by Peter Pulitzer in 1960, it is a glorious hotchpotch of buildings, each on a slightly different level and connected by a maze of passageways, small flights of stairs and oddly shaped halls. Strauss spent a night in every one of the 225 rooms contemplating how best to make every one work: each has its own character, often based on its past.

Indeed, there is a more than a passing nod to history at every turn. The building, which houses the lobby, was once a warehouse. Struass chose Havwoods’ End Grain flooring because end grain was traditionally used wherever there were steel carts because of its durability and longevity. Of course, it also makes it perfect for a hotel lobby, a space where wood floors are often not fitted due to heavy traffic. The palette at the Pulitzer is that of the Old Masters: deep blues, rich greens and pinky-plums. Original stucco ceilings, antique Delft tiles and magnificent fireplaces are offset by an eclectic mix of oil paintings, old mirrors and vintage prints, and thrown into contemporary relief by charred furniture from Maarten Baas, Piet Hein Eek’s patchwork Persian rugs and custom designed furniture by Strauss himself. And amongst all the elegance is plenty of humour, too: the archway of books with a bicycle on top, a wall of 17 brass trumpets with a solitary purple one, and a bright yellow bulldog perched on a drinks trolley all show a quirkiness which is very Amsterdam. Havwoods timber can be found throughout the hotel: both smooth and textured planks from the Venture Plank, Henley and Trapa ranges as well as a couple of different herringbones and the aforementioned End Grain.

“I design mainly in the hospitality and commercial sector,” says Strauss, “and for this reason I need products that are durable but without losing character. Havwoods’ range ticks all the boxes without compromising one way or the other. The woods I have used were well suited to the design contexts and concepts, and there were some really unusual and exciting products to choose from. I also love the fact that the finishes are natural and only get better with time.”