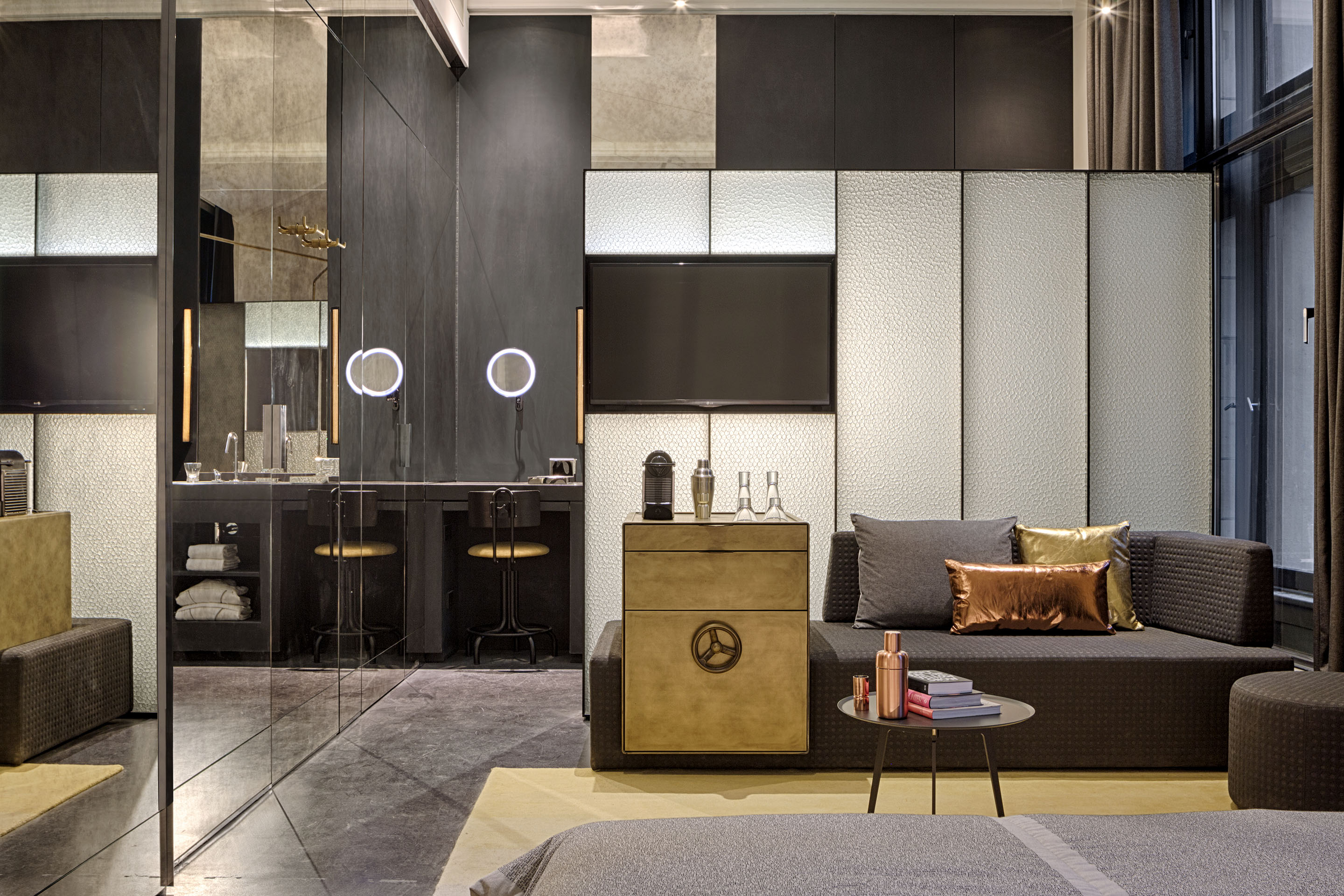 With its cutting-edge design, energetic music scene and sitting in two of the city’s iconic shells, W Amsterdam challenges hotel interior design by setting its own trends. Hamish Kilburn reviews…

Amsterdam, an urban playground famous for its unorthodox and liberal way of living. Its 165 canals have a combined length of 100 kilometres, and, even in a city that is surrounded by water; there are more bicycles than people. With all these ingredients (and more) to make a perfect millennial European hotspot, it was only ever a matter of time (and the right place) before W Hotels would announce the opening of W Amsterdam.

From the outside the hotel looks conventional, but the real ‘wow factor’ is on the inside. Two large buildings in the heart of the city, just metres away from Dam Square, shelter 238 guestrooms. BK Architects have taken the personality of both The Exchange Building and the KAS Bank and integrated them into a hotel like no other, introducing contemporary and fresh spaces.

Through bold architecture and sharp interior design, the hotel aims to connect its guests to the city’s historic culture as well as its modern-day (and night) vivacious social scene. The hotel has been branded as a switchboard of cultures and avant-garde ideas with gold and copper being dominant themes throughout.

Like every W hotel, guests checking in will receive more than just a bed for the night. The ‘W-hole’ experience is on offer and Amsterdam’s voyeuristic social scene is all part of the package.

Replacing convention with disobedient and cutting-edge design, brave steps have been taken to create spaces that are fun and whimsical. Copper pipes, for example, cleverly forms more than just artistic décor to the ceilings. In excess of five kilometres of it has been carefully weaved throughout the building and pays tribute to the telephone wires and electricity lines that exchanged information on a daily basis when the building was home to Telephone Exchange. The eye-catching copper pipelines divert attention as they descend to form a shelf in the racy rooftop bar, plunge down to separate private booths and in the same area, descend to form part of a sofa. The three-dimensional concept, again, challenges conventional hotel interiors, creating an inclusive vibe throughout, which encourages guests to connect, socialise and relax.

Reflecting the traditional lobby of the Exchange building with a modern twist, W Lounge on the sixth floor boasts 360-degree views of Amsterdam City Centre with vibrant colour-filled rugs welcoming guests into the hotel. Quirky furniture sits around a large, contemporary glowing fire. Music plays supremacy in this part of the hotel. The space is a lively hotspot for international DJs, which is handpicked by W Amsterdam’s Music Curator Kristina Dolgova. Continuing the vibes outside, large glass doors open up to reveal a long and narrow pool.

After experiencing the warm and intimate scene that is created in the public areas, it is difficult to imagine how the rooms could possibly compete. However, each room vaunts a fashionable and quirky setting complete with colourful and bold designs. The Extended copper pipes this time assemble to illuminate the room among subtle spotlights.

172 rooms are located in the Exchange building, while a further 66 sophisticated guestrooms will be housed in The Bank Building that will open later this year.

The rooms in the Exchange building will feature a strong theme of street art, which is subtly evident on the walls and glass to separate private areas of each guestroom. Hand-woven bedspreads designed by Bertjan Pot depict small stories of Dutch culture, while the curtains are imprinted with classic Amsterdam canal houses. Even the bathrooms reflect the town’s routes with shower cabins inspired by traditional Dutch phone booths.

Across the road in the Bank building, 66 rooms will pay homage to its prior role. Statement Black and gold bedspreads were inspired by the original the bank vaults, while the pillows play on the idea of representing the outside indoors and epitomise distinctive traditional Amsterdam windowsills.

Privacy is a brave yet interesting concept that has been explored in all rooms. Voyeuristic tendencies blur the boundaries between public and private, creating a dynamic dialogue, which is well executed in the rooms’ designs. For example, silk curtains in the Extreme WOW suite create a subtle margin, with its railings matching the copper-pipeline lights.

The hotel operates two restaurants owned and operated by The Entourage Group; The Duchess and Mr Porter – providing a choice of two different cuisines and backdrop. Proposing an exciting rooftop-dining experience alongside W Lounge in the Exchange building, Mr Porter showcases a modern take on the traditional steakhouse blending exciting flavours in a dynamic ambiance. The Duchess, on the other hand, combines London heritage with Viennese grandeur and offers elegant dining, lunch and afternoon tea. Retaining a sense of heritage and charm, the high ceilings and original fixtures of the dining area allow guests to feast in a truly ethereal venue above what will soon be the rest of the hotel in the KAS Bank building.

Like the town that surrounds it, W Amsterdam is alive and edgy. With its well-placed disobedient attitude, the hotel is a statement piece that has become the ultimate hotspot in a city that laughs in the face of convention.