Posted in People, Uncategorized on 3 April, 2022

Go big or go home! Emma Kennedy talks to Resort interior designer Samantha Drummond and discovers what it takes to design on such a huge scale.

The profile of most interior designers and architects tend to follow a similar pattern: a creative upbringing, with ready access to culture and the arts. An education where the aforementioned are encouraged and nurtured, followed by relevant degrees and internships, that lead to that all important first job. This of course is a huge generalisation, and I can hear a collective cry from those for which this wasn’t the case, but you get my drift.

Interior Designer Samantha Drummond would be shouting from the Marina Bay Sands Roof Terrace, had she read such generalisation, but given she is the subject of my interview, I trust I’ll be forgiven. 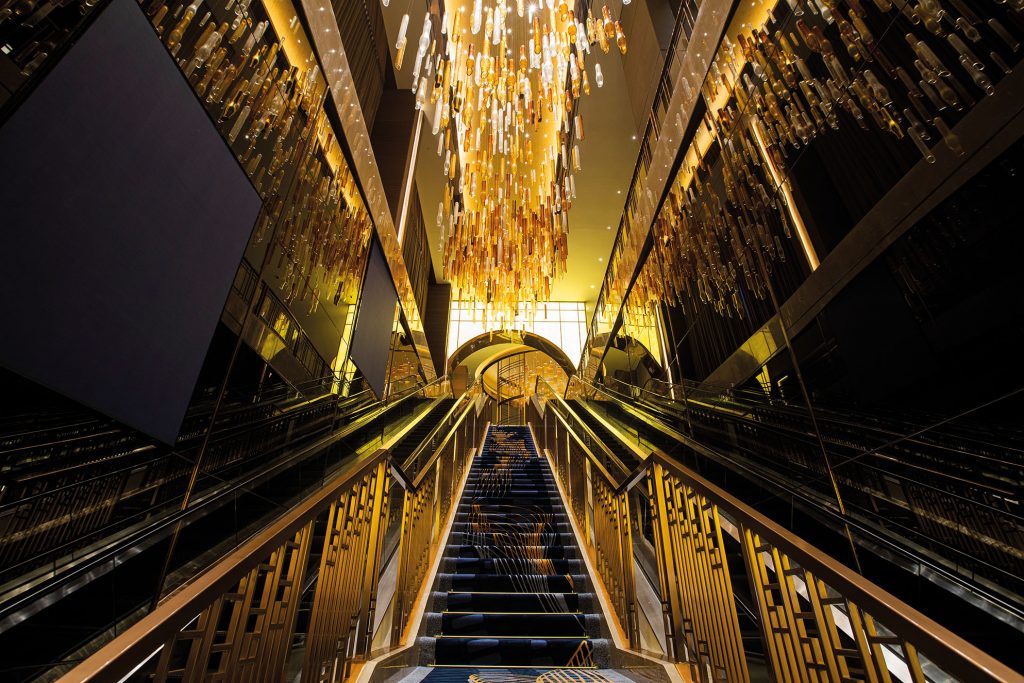 Born and raised in St. Kilda, a seaside suburb of Melbourne, her first job at the age 16 was at a local hotel. Despite being a far cry from the resorts she has gone on to design, it proved to be a fertile learning ground for a career in hospitality design. Deciding against further education, she took a bar job in Melbourne, and recognising why it wasn’t performing as well as it should have been- she promptly offered to redesign it. Seeing an instant upturn in footfall and revenue, she swiftly took her talents to the Melbourne club scene. In 1997 she started taking on design commissions, predominantly in the F&B sector, and launched her own studio. At the age of 34, feeling she had outgrown Melbourne, she accepted a design opportunity in Shanghai.  Asia became her base for nearly 20 years, where she played a pivotal role in the development of Marina Bay Sands, Singapore, Solaire Resort & Casino, Manila and Cotai Central Macau, and where, in 2016, she established her own design company, Habitus Design Group. In 2020, the pandemic and Sam’s globetrotting instinct, brought her to Europe.

Making my way to the Standard, London my head is buzzing with questions for Sam. Crossing from residential design to hotel design is one thing, but from restaurant design to the world’s largest resorts…? By the time I arrive, I have a picture in my head of a larger-than-life force to be reckoned with, and as I scan the restaurant, I look straight past her. Fortunately, one of her group reaches out to greet me and shows me to their table.

Contrary to my imaginings, Sam appears relaxed in a way that only Australians seem to know how, with a curated rock-chic vibe. Introductions are made and easy conversation follows. It is apparent from the off, that Sam has a great sense of humour, and before long, I am aware that if I’m not careful, I’ll be coming away with some great one-liners, but little else! Steering the conversation round to Sam and her career, I begin by asking her how it all started. 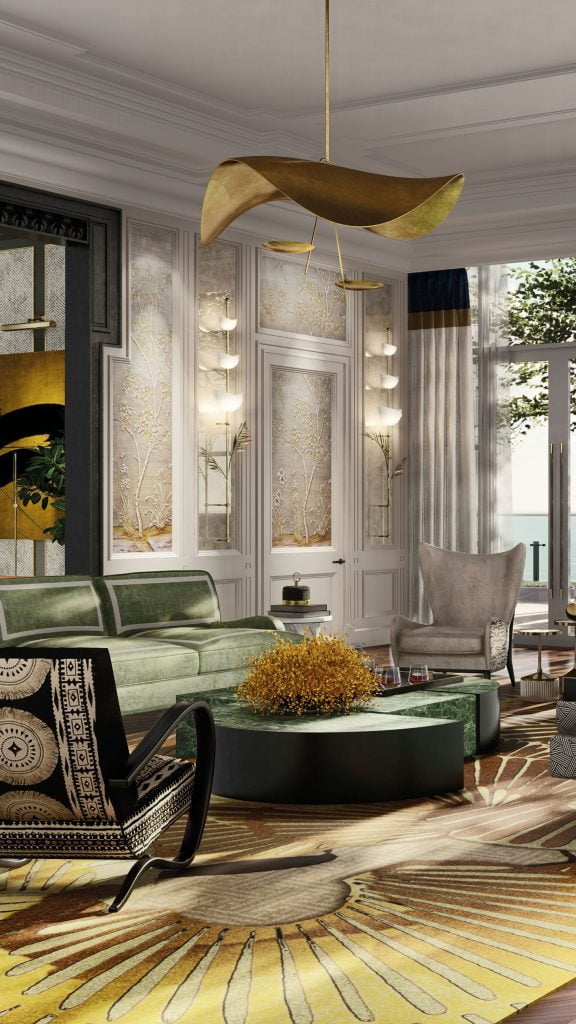 “My Grandfather got me a part time job working in the kitchen at a local Melbourne hotel, the Balaclava, and from day one I loved it. I just wanted to learn everything. I worked my way through every area; the bar, the floor, the kitchen, and within one year I was general manager”.  From there she worked in more bars, pubs and night clubs. “If you have worked in these areas, then you understand how much space you need, what needs to go where, and, as a designer without any formal training, had I not had that early experience I probably couldn’t design.”

Working the Melbourne club scene in the 90’s, she delivered design concepts for events, fashion shows and after parties for the celebrities of the day. “They were fun crazy days, but all through it I was sober. I wasn’t into drink and drugs; it was always business for me. I was the one putting it all together, but yes, it was an exciting era.”

As she recalls the variety of the work, it is clear that Sam is someone who readily threw herself in at the deep end, experiencing the hospitality scene as a whole, and not just as a designer. “At first it was incremental, one job led to another, but I soon realised it was the design side that really excited me”. Focusing more and more on the interiors, she launched her first design business and steadily built her reputation, working her way across- and ultimately exhausting -Melbourne’s growing hospitality scene. “It got to a point where I really had designed most of the venues and when I was offered the opportunity to work on a night club development in Shanghai, I leapt at the chance!”

Switching continents to further your career isn’t unusual, but to be elevated from heading up the design of a nightclub to heading up the design of one of the world’s largest resorts, has the ring of a ninety’s movie about it. My imagination runs riot, as I imagine the interview process and the competition, she had to fight off in securing the role. But no. In typical Samantha Drummond style, it was far less dramatic. “I was approached by Las Vegas Sands, on a building site and asked if I wanted to go to Macau and that was that! I didn’t even know where Macau was, but I just said yes!”

In stark contrast to the organic path her career in Melbourne had taken, Asia was, as she describes it, a ‘complete explosion’.  While Sands Cotai Strip in Macau was still underway, the company began to plan Marina Bay Sands in Singapore. “Had I known what I was walking into at Marina Bay Sands…” she begins before trailing off as if considering it for the first time. “I had no idea what I was walking into, nobody told me, but it just happened, and it happened on such a huge scale!”

I am pleased that she recognises the magnitude of what she has achieved and grateful she doesn’t gloss over it with false modesty. To put it in perspective, briefly, Marina Bay Sands resort is: ‘20- hectare, triple towered, 55-storey property topped by SkyPark. 2,561 hotel rooms, 120,000 sqm convention/exhibition centre, retail mall, museum, two theatres, seven celebrity chef restaurants, external floating pavilions, and the world’s largest atrium casino.’ 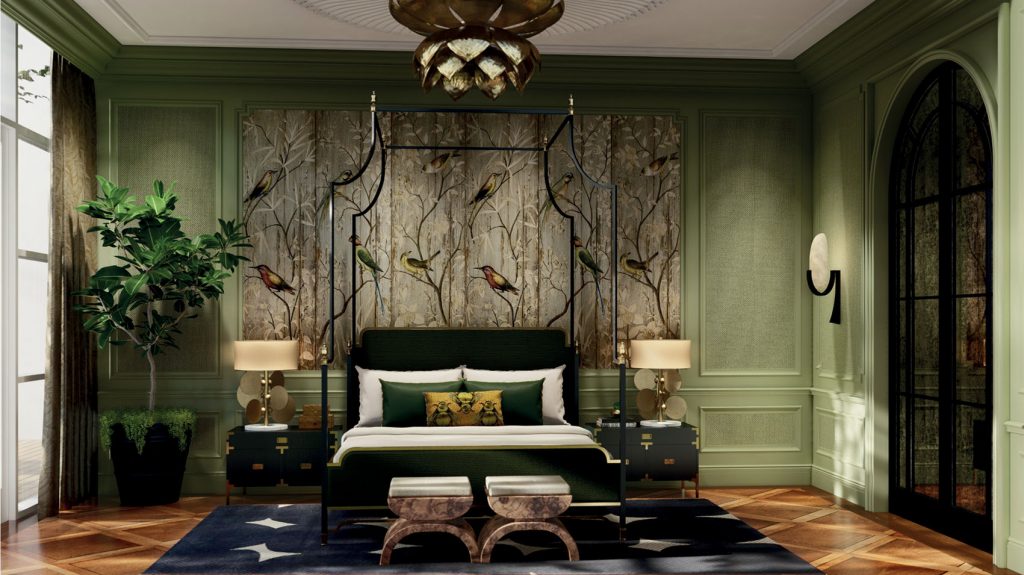 Sam admits even she struggled to appreciate the sheer scale of what she was undertaking. Dismissing my unconcealed awe at her bravery, she laughs and simply said “I think ignorance played a bigger part.”

Responsible for leading the interior design and the development of the overall aesthetic direction, the eye-watering budgets afforded the hire of the world’s leading design talent. Soon she found herself working with a team that read like the who’s who of global interior design. “I was working with some truly great people. We used architects David Rockwell and Moshi Safdie, and seasoned designers and artists like Michael Bedner (HBA), Anthony Gormley and Ned Khan. It was amazing. Had they not been on board, it would have been completely overwhelming. Everything they did, I just absorbed it all. In my opinion, the more skilled and talented people are the kinder they are.”

However, working closely with Las Vegas Sands then CEO and Chairman, was more complex. “Sheldon could be a challenge. After all, he was the third richest man in the world, as he liked to remind me. However, for some reason I could handle him, and consequently I was always the one sent to deliver bad news or ask difficult questions- though never without a solution!” 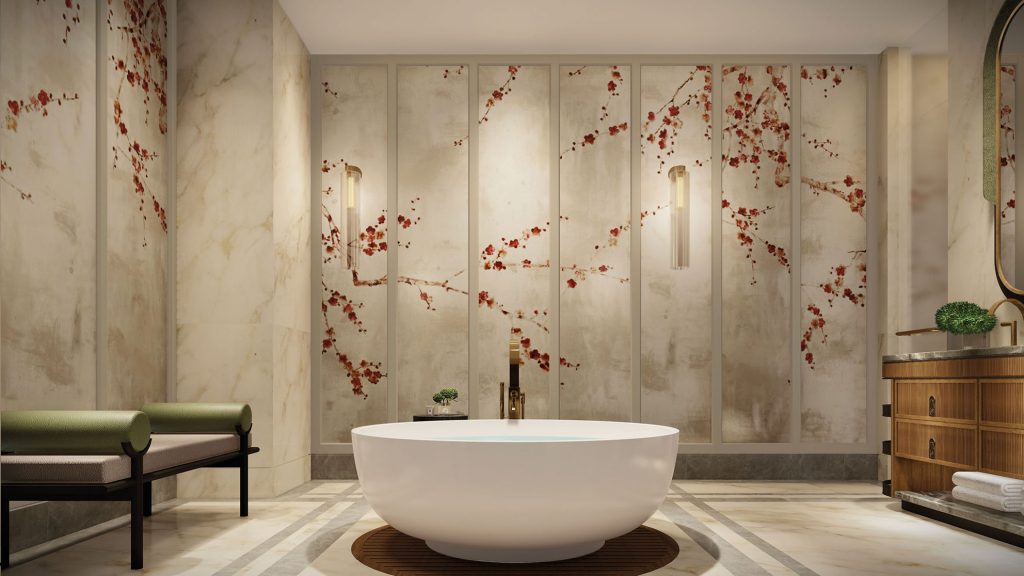 I ask her to tell me of the kind of problems that could occur on a project of this scale. “One example was Chanel, who wanted us to move the main structural column that held up the whole tower- and this was going to cost a significant amount of money. So of course, I would go to Vegas with my handwritten sheet of facts and deliver the news…”

Like her early career, one resort led to another, and her experience grew along with the size of the projects. However, the one design pitfall that no designer ever wants to be accused of, is creating a space that could be described as generic. But how, on a resort development, can this be avoided? “Typically, on these big builds, they tend to have budget constraints when it finally comes to furnishing the rooms. I try to maintain a similar interior language in the typical rooms but implement differences in furniture and introduce local art and artifacts. We also get the opportunity to create different environments in the larger multi bay suites. My aesthetic is a blend of Asian and Scandinavian, I love the paired back interiors with eclectic Asian antiques and modern art.” Her designs are stunning. They are a rich mix of influences, simple elegant lines offset by flashes of Chinoiserie and flowers paintings, reminiscent of Georgia O’Keeffe. Always luxurious but never ostentatious- and certainly not generic!

Having firmly established herself as a major player in the world of Resorts and Casino design, Sam has an impressive portfolio that continues not only to grow but to diversify. Being based in Denmark for the past two years has not, of course, meant that she’s been idle. In Copenhagen, Sam is nearing completion on a new luxury menswear store and is designing a Michelin star restaurant as well as leading the conversion of a historic property into a mixed-use scheme. She has also designed the interiors of a couple of private residences and right now is busy setting up Habitus’ London studio in addition to the Asian offices. Meanwhile, most of Asia is once again open to international travel. “Many of our clients are high-net worth and are….’interesting people’…” she laughs without giving anything away. “Our relationships are built on trust, so I can’t send my second in charge to see them. I often have to talk them into doing many of the designs I am offering, and that has to be done face to face.”

As Sam herself pointed out, it’s usually the very talented and skilled designers who are the most generous, and I think she can definitely include herself in that category.