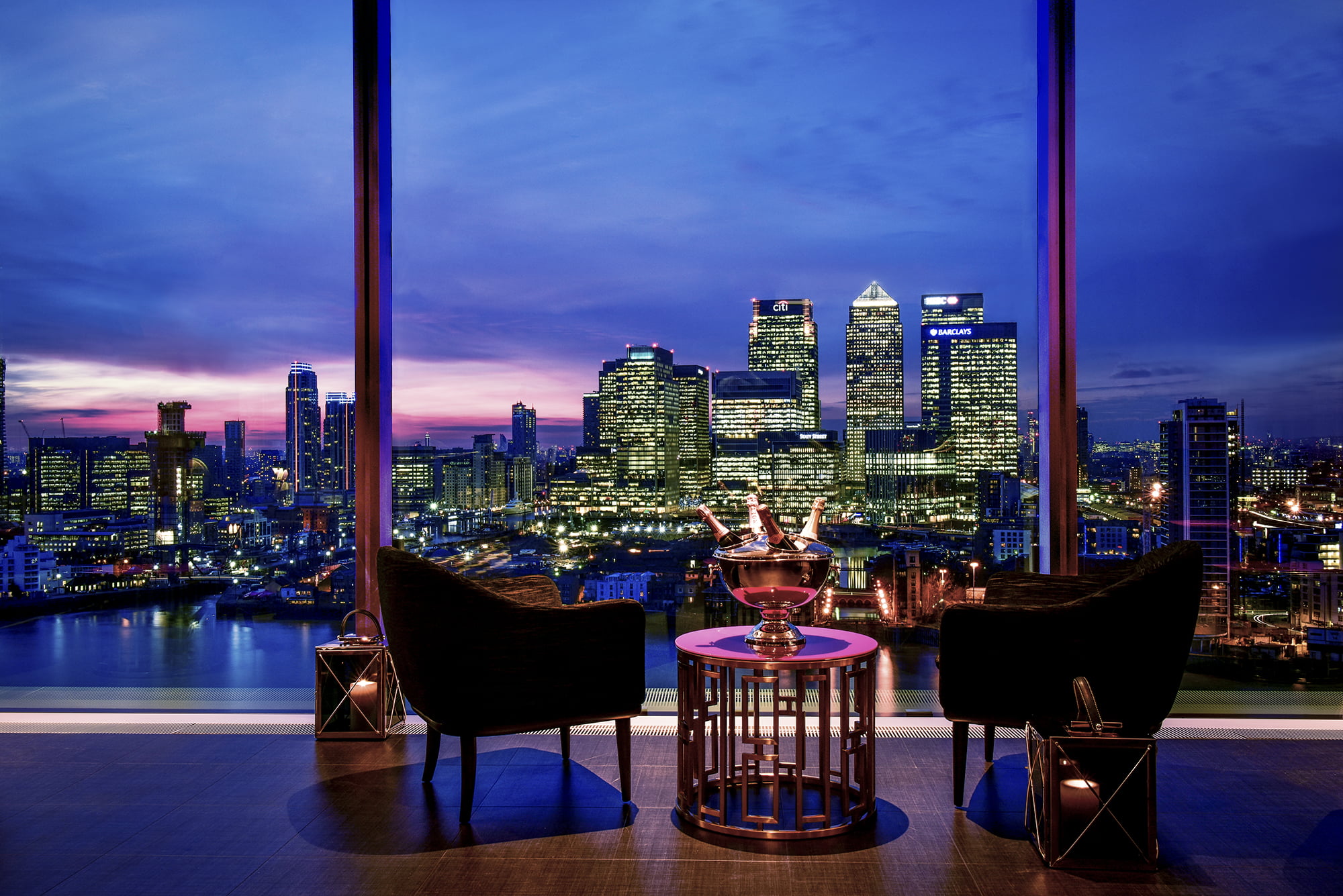 East London’s much forgotten history – where journeys on the east India trading route brought back tea, spices, porcelain, fabrics and stories of the high seas – is told through the interiors in the newly opened InterContinental London – The O2. Hamish Kilburn writes…

Boasting stunning views of the city from an exceptional perspective – from both the rooms and the public areas – the hotel opens and celebrates the location, made famous more recently in popular culture from the iconic landmark – and entertainment venue – the O2 Arena that sits opposite the cluster of high-rise buildings, which together form Canary Wharf business district.

Lead architects RTKL UK Ltd designed a striking building to sit adjacent to the world-renowned entertainment venue and just 400 metres from North Greenwich underground station. “We obviously had to be extremely sensitive to the fact that the proposed building was to stand next to the iconic O2 Arena,” says Todd Lundgren, Executive Director RTKL UK Ltd. “We had to consider the connection between the hotel, the residences and the arena itself when deciding how to facilitate people moving back and forth.”

Working in tandem, Grove Developments and G1 Architecture were both responsible for the hotel’s interior design including the lobby, reception, restaurants and bars (including The Peninsula restaurant, Market Brasserie, Clipper Bar, Meridian Lounge and Eighteen Sky Bar), the conference centre, comprising the Arora Ballroom and pre-function areas, as well as the Executive Lounge and The Spa. Gordon Pickering, Senior Partner of G1 Architecture explains: “We were engaged to produce the interior design concepts for the hotel, and because of its location, we based the concept on the maritime theme. The main challenge was the timescale, because we came on to the project quite late, but we completed the project by the dates that were originally agreed. Working with Grove Developments turned out very well and our designs, themes and concepts for the hotel were well received by both the owner and the operator.”

The main lobby is the hub of the hotel. It is a ‘lighthouse’ or safe haven for guests to return to again and again while they make their own journeys around the many areas of the building. Look closely and you will see the ‘deconstructed lighthouse lens’ on the feature wall. Navigation and maritime details play a dominant role in the interiors with bronze detailing in the furniture and maps and compass references throughout. A large brass-detailed pattern within the stone floor crafted to show a compass sets the tone. “Feature light fittings inspired by the rigging of a ship is used as a concept for the staircase light feature, says Martin Farrow, interior designer at Grove Developments Ltd. “Its combined with vertical pendant lights. Vertical linear and textured wallpapers with a reflective quality allow the glass wall to remain as the main feature, but compliment all the finishes.”

The 453-room InterContinental London – The O2 brings a new level of glamour to cosmopolitan guests seeking to enjoy the allure of global etiquette, timeless experiences, and the city’s local heritage. Alongside its five destination-inspired food and beverage outlets including The Peninsula Restaurant and rooftop sky bar, the hotel boasts a world-class health spa and sumptuous accommodation – including 59 suites – and the most breath-taking views over London.

The rooms continue to explore the maritime theme, with some featuring a large nautical-themed map of the Thames and compass references displayed above the large bed. The spectacular views can be privately captured through floor-to-ceiling windows. “The concept continues throughout the hotel,” explains Monika Mockute, interior designer at G1 Architecture. “We have used a lot of artwork and sketch-styled drawings in the maritime theme in the guestrooms and suites.”

On the eighteenth floor, Eighteen Sky Bar’s views and backdrop speak for themselves. This part of the hotel is yet another example of how F&B areas within hotels are evolving at a rapid and exciting pace to reveal exuberant spaces, which often involve incredible panoramic views and as a result, are now in direct competition with other restaurants and bars outside of hotels. “I think that the F&B experience at the hotel will be one of the best in the area,” says Pickering. Guests casting their focus east will enjoy towering views over the O2 Arena, while the deep, dark and lush coloured fabrics blend well with the contemporary and comfortable furniture. Even the carpets, manufactured by Hammer Carpets, reference maps to celebrate the east India trading journey. “The space is inspired by the view and with subtle accents of navigation and astronomy,” explains Farrow. “Reflection and lighting from the bar, full length backlit bottle display with hang-feature lights above, reflect and twinkle like the stars guiding sailors in the night.”

InterContinental London – The O2 operates under a franchise agreement with Meridian Hotel Operations Limited and will be managed by a division of the Arora Group. It is the second London property in the InterContinental Hotels & Resorts portfolio of 30 prestigious European hotel destinations.